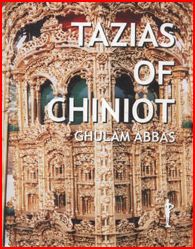 Considering that Pakistan is not a very large country in terms of area, it is remarkable for the diversity of languages and cultures that flourish here. It is also a country with a rich aesthetic tradition as evidenced by our local crafts. Before partition, of course, this cultural mÃ©lange was all the more remarkable for its multi-religiosity as well. This is obviously no longer the case, and even linguistic and sectarian differences have become the basis for discord. In fact, Pakistanis are generally regarded as being a less-than-tolerant species. But this was not always so, and it is still not true for vast swathes of the country.

An unpretentious book, Tazias of Chiniot highlights an enduring and unique craft of Pakistan with deep roots in the historical and cultural context of the subcontinent. The tazia, for the uninitiated, is a replica of the shrine of Imam Hussain — similar to a funeral bier — and is a key feature of the Muharram rituals throughout Pakistan. In Chiniot, however, it has special significance and is the focal point and the most important religious icon of the ashura procession. Chiniot, in the Jhang district of the Punjab, is famed for its woodwork and the tazia benefits from this local expertise. In fact, the artisans of Chiniot, who are engaged in making furniture for most of the year, consider it a point of prestige and a mark of their exalted status among their peers, in terms of expertise as well as spirituality, to be associated with tazia-making.

In shedding light on this unique art form, the author also explores the multicultural and indeed multi-religious traditions that surround this craft. Unlike the larger cities of Pakistan, where religion has been politicised and where ethnic and sectarian strife have been carefully fostered, this trend is not in the tradition of the subcontinent, and in the smaller cities, religious rituals of one sect are still embraced by another. The emotional appeal of the tale of Karbala resonates across the board in Jhang, and the colour and pageantry of the Muharram procession is owned by all. As the author points out, “In Chiniot no one can differentiate between Shiite or Sunni devotees during the performances of the Muharram rituals, as each thinks of his/her participation in the rituals as a cultural custom and religious duty.” In fact, with a few exceptions, almost all tazia-makers belong to the Sunni sect. 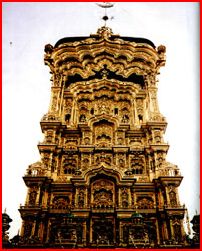 Even more intriguing, the form of the tazia closely resembles that of a Hindu temple. Shah Jamal Wala Tazia, one of the oldest tazias of Jhang, has the same form as the Lal Nath temple in Jhang city. Then again, the Tazia of Shadi Malang in Chiniot is similar in form to the Hindu temples of Orissa. This is, of course, the true legacy of the multi-religious subcontinent where Muslim culture took root amidst the rich cultural landscape of ancient India. The author quotes scholars and historians and emphasises the concept of rawadari or tolerance. One quote explains that the “distinguishing quality of Al Hind was that it did not erase the ancient Indian heritage, but embraced it within a new consciousness of good neighbourliness, of sharing together and joint ownership of the sacral space of the people of the land.” The author further explains, “Diversities and differences were honoured, and aesthetics as well as human values were cherished to this purpose.” According to him, traces of this rawadari is still reflected in the Muharram rituals. Again, the kahars, or those who carry the tazia, are almost all Sunni and in pre-Partition India were of the Hindu faith. The Sufi tradition also embraced this concept and till today Sufi shrines throughout India and Pakistan are visited by Hindus and Muslims alike.

The respect for and sharing of religious space is also evident in Hyderabad, Sindh, another important centre of tazia-making. Here the Hindu community is still deeply involved in the Muharram traditions and some members are known to set up sabeels so that no one is denied water even as they recall the thirst of the martyrs. Again, all the tazia artists in Hyderabad are Sunni, and they see the craft as a distinguishing feature that keeps alive their identity as mohajirs or immigrants. One of the more interesting tazias of Hyderabad is the Buraq Wala Tazia, the Buraq being the winged horse with a female head that carried the prophet to the heavens. This is perhaps the only tazia that incorporates a human face in it. 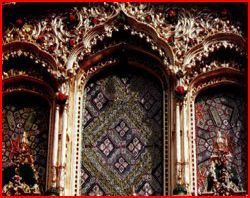 The several colour plates in the book show the various kinds of tazia and the intricate detailing and embellishment that is lavished on each. The artisans draw their inspiration from local architectural themes and employ indigenous motifs, thus making the tazia truly representative of their aesthetic tradition. The author, who hails from Chiniot and whose family includes tazia-makers, informs us that “Chiniot is peerless in the art of tazia making.” The tazias of Chiniot in particular are distinguished by their fabulous detailing as well as their height, some reading as high as 37 feet. Some of the tazias from Hyderabad, especially those made of paper, are consigned to the water to mark the end of the Muharram procession. But the tazias of Chiniot, which are precious not only in terms of money but are considered works of art, are carefully dismantled and stored for the following year.

The book, which emerged from a Masters thesis paper, is clearly a labour of love for the author Ghulam Abbas, who not only interviewed countless artisans but also apprenticed himself to master craftsman Akhtar Ali Pirjha. And what can be more satisfying than being able to celebrate a glorious tradition that one can legitimately identify with and own. Speaking of the artisans, the author says, “They are the keepers of a treasure of traditional knowledge learnt from their forefathers.” And this is his homage to them.