General Pervez Musharraf’s much-touted madrassah reforms, aimed at “stalling the flow of recruits” into militant organisations and bringing the seminaries into the mainstream, have come to a standstill after the Lal Masjid operation. Clerics have broken off negotiations on the issue of madrassah reform. They accuse President Musharraf of betrayal and hold him responsible for the attack that led to the death of scores of “innocent” seminary students in the Lal Masjid shootout, to “please his western allies.”

According to Qari Hanif Jallundari, general secretary of the Union of Seminaries, a supreme council meeting of senior clergy will be held in Multan on August 7 to chalk out a strategy of protest against the Lal Masjid operation and to deal with the looming threat posed to the country’s 16,000 — 20,000 madrassahs.

“There is a complete deadlock and we have told the government that there will be no further talks on any issue, unless they release Maulana Abdul Aziz and restore him as the chief khateeb of Lal Masjid,” he told Newsline.

“We have also conveyed our reservations to them on the issue of the change of madrassah syllabi and the government’s demands to disclose sources of funding and set a madrassah board to conduct examinations. We have told them what is acceptable and what is not, ” he says.

Seminary clerics, who have resisted government control over madrassahs, are adopting a stance of non-cooperation after the bloody Lal Masjid operation. “The clerics were sceptical of madrassah reforms at the very outset as they think that they have been initiated at the behest of the US,” Religious Affairs Minister Ejaz-ul-Haq told Newsline.

The government had pledged 500 million rupees in the budget last year to equip madrassahs with modern tools of learning such as computers. “Not a single penny of this sum was accepted by the seminaries, as they suspected that the money came from the US,” he said.

Most madrassahs were orginally established on government lands, to which the seminary clerics staked their claim. Interestingly, the mullahs had accepted funding from the US when they were being used by the West to churn out jihadists during the Soviet invasion of Afghanistan. They have since become self-sufficient, depending on private donations to meet their needs.

Generations of young militants are brought up in these schools, representing various sects of Islam, such as the Deobandi and Ahle-Hadith. Some madrassahs are sponsored by religious parties, while others are affiliated with militant groups operating in Afghanistan and Kashmir, as well as within the country.

Wali Khan, the deputy leader of Karachi’s Jamia Farooqia Mosque, believes that the country’s madrassahs are being victimised by the nation’s pro-western leadership. “The seminaries are the biggest threat to Pakistan’s anti-Islamic forces,” he says.

Khan is a disciple of the Deobandi school of religious thought, a movement which advocates a return to strict Islamic principles in order to save Muslims from western “contamination.” Despite the movement’s radical outlook, he insists that the schools are not breeding grounds for violence.

Within the Jamia Farooqia, a Taliban-style regime is in place. No women are allowed inside, and all photographs are forbidden. The students are neither allowed to read newspapers nor watch television.

The school has expanded over the last 40 years from a mere four rooms to a three-storey building where hundreds of boys live and are provided free meals. Scores of former pupils from this school have been implicated in violence against Shi’ite Muslims in Karachi’s sectarian outbreaks, while security officials say others have fought against coalition troops in Afghanistan. Khan insists that the school only imparts religious education and does not permit students to take part in political activity. However, he states: “Once they graduate from our school, we are not responsible for their actions.” 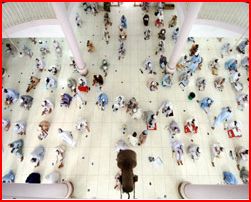 Even if most madrassah students or teachers deny any connnection with militant organisations, security officials believe otherwise. “The involvement of religious schools and their students, both in acts of terrorism and in providing safe haven to terrorists, is undeniable,” said a police official who had investigated the murder of Wall Street Journal reporter Daniel Pearl. Evidence of close links between madrassah leaders and terrorist groups is mounting. Last month, when army commandos cleared the Lal Masjid compound, they recovered piles of highly sophisticated weapons, ranging from RPG-6 and phosphorous grenades to suicide jackets and high-tech gas masks.

Then, a spate of suicide bombings followed the Lal Masjid operation, killing over 250 people, the majority of them security officials. Intelligence reports reveal that suicide bombers may have even infiltrated into Islamabad and could strike there any time.

A memo issued by the interior ministry has warned soldiers and officers of the Pakistan Army, Frontier Constabulary, Elite Force, Anti-Riot Force, Punjab Rangers and the Punjab Constabulary against moving in public places and driving private cars in uniform. The ministry has also directed the Islamabad administration to improve its coordination with the intelligence agencies in order to efficiently counter terrorism in the federal capital. A circular issued by the interior ministry directs all concerned departments, as well as hotels, to restrict holding of private and official parties till further notice.

According to official statistics, the number of madrassah students in Pakistan is estimated at 1.5 million. Interestingly, Islamabad has, by far, the highest number of madrassahs per square kilometre in the country. It has 127 seminaries, teaching 16,000 students.

The flow of funds into these religious schools is massive. This can be gauged from the fact that Jamia Binoria, a religious school located at SITE, Karachi, maintains that its annual expenditure runs into millions of rupees, an amount which even the government is unable to provide to some of its best public-sector institutes. “Currently, the yearly expenses of all departments of Jamia Binoria are above Rs.51,572,000,” reads a message on its website.

“We feed 10,000 people at one time, and slaughter two cows a day to feed these students. Musharraf should feed the same number of people for just a day, and only then should he ask us to identify the source of our funding,” says Mufti Naeem, the head of Jamia Binoria. On being asked how they meet the expenses of the school, he says, “God alone is the giver, and He takes care of everything.”

Madrassah authorities have refused to divulge their sources of funding. Many of them maintain that the pious Muslims who donate money do not wish to be identified.

Critics of the madrassah system believe that one reason that madrassahs resist reforms is that they have become million-dollar enterprises, where the managements earn truckloads of money through donations. Given that most of these funds come from hidden sources or unnamed donors, it is extremely difficult for anyone to audit them.

The workings of the “madrassah or jihad economy” were evident when Maulana Masood Azhar separated himself from the Harkat-ul-Mujahideen to launch his own jihadist movement, the Jaish-e-Mohammed. The maulana’s supporters took over the organisation’s property all over the country. Some reports suggest that the breakaway jihadi faction grabbed assets worth over one-and-a half billion rupees.

According to the Pakistan Centre for Philanthropy, Pakistanis donated a sum of 70.5 billion rupees towards philanthropic causes five years ago. This figure is estimated to have grown since. In addition, approximately three billion rupees is donated as fitra on the occasion of Eid-ul-Fitr, and seven billion rupees is collected on Eid-ul-Azha. Other sources of funding include the alms that people dole out to beggars and the money that is voluntarily deposited in donation boxes in mosques, imambargahs and mazaars. Similarly, Pakistani expatriates in the US, the UK and other western countries send several billion rupees to Pakistan every year in charity.

There are no official statistics, but according to some estimates, more than 50% of the total money donated through philanthropy goes to the madrassahs because they are obvious ‘centres for the impoverished.’
General Musharraf, on his part, has declared his intention many a time to bring all seminaries into the mainstream, but his opponents say that he is too slow to take action and his statements are meant to appease his western allies rather than to seriously address the madrassah issue.

Kamila Hayat, joint director of the Human Rights Commission of Pakistan (HRCP), says that the government has miserably failed in containing the proliferation of religious schools, and the number of unregulated seminaries is increasing by the day.

Ms. Hayat argues that even if the government were to introduce modern subjects to the madrassah curriculum it would not make a difference. “What difference will it make to a child if he or she is taught English or computers, but continues to get lessons in gender or religious intolerance?”

An International Crisis Group (ICG) report, titled ‘Unfulfilled Promises: Pakistan’s Failure to Tackle Extremism,’ fears Pakistan’s failure to crack down on madrassahs and jihadi networks has resulted in a resurgence of domestic extremism. The ICG reports that in March 2002, the then minister of education, Zobaida Jalal, visited the US to garner support for the government’s effort to “secularise education and address the problems posed by a booming and unreformed madrassah sector.” As a result, Pakistan received substantial funding, including $100 million from the US government for education-sector reforms. However, the report says, despite this and repeated government pledges to address educational needs and enact madrassah reform, most fundamental priorities remain neglected. “The education sector is still highly politicised, tailored more to the interests of various state and political actors than to an objective assessment of educational requirements.”

“But the government inaction continues to pose a serious threat to domestic, regional and international security… If the US and the others continue to restrict their pressure on Musharraf to verbal warnings, the rise of extremism in Pakistan will continue unchecked,” concludes the ICG.

With the backlash from the religious seminaries after the Lal Masjid operation, and Musharraf’s shaky hold on power, the chances of implementing madrassah reforms seem slimmer than ever. As such, streamlining thousands of madrassahs that have been allowed to proliferate unchecked and restraining the millions of students who have been exposed to a hardline fundamentalist ideology will prove to be a daunting task, not just for this government, but for governments to come.