The security situation in North Waziristan has gone from bad to worse since July 15, when the tribal militants, commonly known as Pakistani Taliban, unilaterally scrapped their controversial 10-month-old peace agreement with the government. As promised, they have started a guerilla-style war that is classic in approach but has, at the same time, borrowed from the tactics employed by resistance fighters in neighbouring Afghanistan and in distant Iraq. No doubt then that their hit-and-run attacks, ambushes, remote-controlled landmine explosions and long-range rocket attacks have inflicted significant losses on the Pakistan Army and made the troubled tribal agency the most dangerous among the seven regions that make up the Federally Administered Tribal Areas (Fata).

North Waziristan is also having an impact on the situation in the adjoining South Waziristan tribal agency and in the rest of Fata. The scrapping of the North Waziristan peace deal, in particular, is casting its shadows on the fate of similar agreements made by the government in South Waziristan and Bajaur. Two peace agreements dating back to 2005 are still in place in South Waziristan, but both have come under strain recently and could fall apart if prompt efforts are not made to restore the trust between the military and the militant. The uncertainty grew following the death of the tribal militant commander Abdullah Mahsud in Zhob, Balochistan.

An ominous development is the reported agreement between the local Taliban in both North Waziristan and South Waziristan to come to each other’s rescue in case of fresh military operations by the Pakistan Army, or by the US through its forces deployed in Afghanistan. The two sets of tribal Taliban certainly had contacts with each other in the past but there was little coordination between them in terms of planning and launching guerilla operations. Evidence of closer cooperation between them emerged when Taliban fighters in South Waziristan took up positions recently on hilltops overlooking major roads in anticipation of military operations in North Waziristan. In the words of a spokesman for the militants, the Taliban in South Waziristan didn’t want to be overtaken by events once the government launched fresh military operations in North Waziristan, and the deployment of their fighters on mountain ridges was to show their readiness to face any eventuality. One would, therefore, expect coordinated Taliban attacks on the Pakistan Army troops in the two Waziristans in the event of hostilities breaking out in the area.

On the surface, the government appears keen to avoid such an eventuality. The NWFP governor, Lt. General (Retd) Ali Mohammad Jan Aurakzai, made every effort to save the September 5, 2006, peace accord in North Waziristan. He hurriedly reassembled the 45-member loya, or grand jirga, in Peshawar and had it flown to Miramshah in helicopters to try and contact the members of the Taliban shura, or council, in a bid to resuscitate the peace agreement. The jirga members failed to convince the Taliban shura to hold formal talks with them and had to return to Peshawar empty-handed. After another round of talks with the governor, the jirga opted to take a seven-day break in the hope that the two sides would show some flexibility over the issue of the roadside checkpoints. The militants wanted the government to pull back troops redeployed at several checkpoints as it constituted a violation of the peace accord. The jirga members, who had brokered the original deal last September, tended to agree with the militants. As for the government plea that soldiers were redeployed at the checkpoints in view of suicide bombings targetting the forces and also to check kidnappers and car-lifters, the jirga argued that all violations of the peace accord should have been reported to it instead of unilaterally deploying troops in violation of the terms of the agreement.

Even if the jirga reconvenes, it would face an uphill battle in reviving the peace accord, in view of renewed violence in North Waziristan and the construction of four new roadside checkpoints by the military. The government, too, would have to justify the revival of the peace pact that the US and its Nato allies and the Afghan government had reluctantly accepted as a means to empower tribal elders and the political administration of North Waziristan and achieve the objective of sidelining the Taliban militants and expelling foreign fighters from the area. The US greeted the collapse of the peace accord by arguing that it had provided safe havens to Al-Qaeda and the Taliban in North Waziristan and had failed to stop the cross-border infiltration of fighters to Afghanistan. Governor Aurakzai, architect of the North Waziristan peace agreement and the most steadfast in counting its virtues, has lately been talking about addressing the concerns of the US. It appears that he too would have to give up his defence of the accord and go along with the new government policy to adopt a tough line against the tribal militants.

However, the challenge of militancy is no longer confined to North Waziristan, or for that matter South Waziristan. For the first time, the Mohmand Agency, until now the most peaceful in Fata, is experiencing the emergence of tribal militants who want to be known as Taliban. They recently occupied the shrine of the revered freedom-fighter Haji Sahib Turangzai in Lakarro in Mohmand Agency and renamed the adjacent mosque as Lal Masjid. A madrassah located in the compound was named Jamia Hafsa, and banners proclaiming the late Lal Masjid cleric Abdul Rasheed Ghazi as a martyr were hung at the entrance to the mosque. It was the second time that the local Taliban in the Mohmand Agency made their presence felt. Their earlier attempt was suppressed by a jirga of Mohmand and Safi tribal elders and this time too the local jirgas, worried that Mohmand Agency could go the way of the violence-prone Bajaur Agency in their neighbourhood, would in all likelihood resolve the issue peacefully. Whatever the outcome of this showdown, the incident could help explain the emotional reaction in NWFP and Fata to the military operation against Lal Masjid and Jamia Hafsa in Islamabad. One reason for such a strong reaction is the fact that most of the male and female students who were killed or went missing in the Lal Masjid-Jamia Hafsa incident belonged to the NWFP and Fata. The spate of suicide bombings and other acts of terrorism targeting the security forces were retaliatory in nature and were meant to harm those who had taken part in the military operations at the mosque and madrassah complex in Islamabad. The situation was already tense in the tribal areas and the storming of the Lal Masjid-Jamia Hafsa complex by the soldiers and the killing of an unspecified number of religious students there added fuel to the fire. 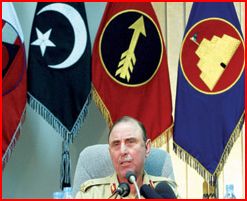 Tension has also been rising in Bajaur Agency, where the militants led by Maulana Faqir Mohammad vowed to avenge the Lal Masjid-Jamia Hafsa killings at a largely-attended funeral for three young men killed in the mosque-madrassah complex. Apart from the rocket attacks on security forces’ posts and government installations that have become routine, the abduction and beheading of two soldiers recently raised the stakes in the battle against the militants. This was the most serious incident targeting the security forces after the killing of a major of an intelligence agency and his colleagues in an ambush in Bajaur Agency’s Loisam area some months ago.

In Bajaur’s neighbourhood, the deployment of a division of the Pakistan Army in Lower Dir and Swat districts provoked a strong reaction, and for the first time the area witnessed suicide attacks and targeted killings of policemen. The military hasn’t launched any operation yet in Dir Lower and Swat and, in fact, some of the troops deployed in Matta, which is a stronghold of the banned Islamic group Tehreek-e-Nifaz-e-Shariat-e-Mohammadi (TNSM) have been pulled back to their main camp in Kanju near the twin towns of Saidu Sharif and Mingora. The MMA-led provincial government is now demanding withdrawal of the troops from the area, even though Chief Minister Akram Durrani had approved the move when first mooted in a meeting of the National Security Council presided over by President General Pervez Musharraf. The troops’ deployment has also driven a wedge between the JUI-F, to which the chief minister belongs, and its MMA partner, Jamaat-i-Islami, which enjoys greater support in Lower Dir and Swat and is opposed to the stationing of the forces and any military operation in its stronghold.

The Khyber Agency has also been destabilised due to intense fighting between Lashkar-i-Islam and Ansarul Islam. These two tribal-based Islamic groups have been using heavy weapons to settle scores and the government has failed to stop the fighting that affected life in Tirah Valley and Bara area throughout 2006 and 2007. Occasionally, the fighting spills over to Orakzai Agency, which suffers from its periodic bouts of sectarian strife between Sunni and Shia tribes. Recently, the neighbouring Kurram Agency, too, witnessed sectarian riots for the first time in 10 years. It also suffers from the fallout of the Taliban-led resistance in the adjoining Paktia province in Afghanistan.

All in all, the tribal areas are hostage to serious law and order issues stemming from the rise in militancy spearheaded by the Taliban and aided and abetted by elements loyal to Al-Qaeda. The extremist sentiment is fuelled often by arbitrary military operations by the Pakistan Army and cross-border missile strikes by the US military. With the US threatening to strike inside Pakistan to flush out suspected Al-Qaeda and Taliban hideouts in case the Pakistan Army fails to do the job, the Musharraf government is under increasing pressure to “do more” in America’s misguided and imperialism-driven war on terror. But the Pakistan Army would have to tread carefully due to the domestic repercussions of renewed military operations in the tribal areas, particularly in the two Waziristans. It also has to keep in mind the cost of pursuing such operations after having suffered heavy casualties: more than 900 soldiers have died at the hands of battle-hardened local and foreign militants.