The contemporary miniature, divested from its classical mould, is now up for grabs.

Young artists investing its frames with new sensibilities were initially conscious of the rupture from tradition and tried to retain or reinvent relevant vestiges of Mughal art by incorporating or aligning them with their modernist vocabulary. With the passage of time, this regard for and dependence on the original model has ebbed, as allied innovations have begun to take precedence.

From its orthodox mannerism to the current ‘cheeky pop style,’ the Mughal miniature has had an adventurous journey towards contemporaniety, often enlivened with daring, audacious makeovers. It has been accosted to address political issues, used as a sounding board for gender concerns, a vehicle for diaspora art and east-west cultural conflicts and, above all, it is one of the most popular forums for expression of issues related to selfhood among the new-generation artists. Some radically singular approaches have, in turn, influenced a host of mutations, which collectively amount to a pot-pourri of styles and trends within the new form of the genre today.

An exhibition of miniatures at Chawkandi Art recently was a sampling of this assortment. Three artists, Amna Hashmi, Amjad Ali Talpur and Abdul Rahim, expressing individual themes and styles, were grouped together under the miniature umbrella. Amna Hashmi’s anime-inspired miniature collection was a delightful new variant within the genre. The artist remarked that it was her fascination for the miniature technique and strong bent for graphic art and story narration that prompted her in this direction. Her favourite album portfolios of old miniatures also pertained to adventurous exploits and fables like the ‘Hamzanama,’ ‘Kalilah wa Dimnah’ and ‘Anwar-e-Suhayli,’ where fantasy and reality mix in an engaging storyline. She is particularly drawn to the Persian miniature and its incorporation of Chinese and Japanese features and brush techniques. She traces her own interest in Japanese anime and the-manga series through this link. 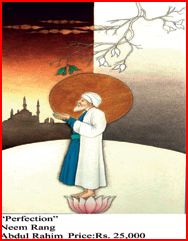 Anime is a Japanese term for animation, whether hand-drawn, computer-generated or a combination. Storylines, typically fictional, are aimed at boys, girls and specific adult audiences. Anime features a wide variety of artistic styles which vary from artist to artist. They are generally characterised by detailed backgrounds and stylised characters in a variety of different settings. Characters have very large eyes, a range of hair colors, and exaggerated physical features, especially regarding anime fantasy creatures, (e.g. witches, spirits, etc.). Emphatic gestures communicate their emotional states. Bright colours are rarely used, unless needed, and the works are always designed to look as realistic as possible. Anime appears in many formats, including movies, original video and television. Stories and characters may be original or taken from Japanese comic books. In the 1980s, anime was increasingly accepted in the mainstream, and since the mid-1990s has gained popularity outside Japan.

Miniature and anime are two individual genres with very distinct characteristics and Amna Hashmi’s renditions presently are animes in a mini format. She is faithfully adhering to the anime ideology, and if the distant perspective, trailing clouds or foliage patterns are representative of the miniature imagery, the difference is barely perceptible. In fact, it is her exquisite brushwork and a sensitive and meticulous linear rendition that aligns her more to the miniature tradition than anything else. Her paintings can qualify more as miniatures if there is an obvious fusion of the two genres. This synthesis can spawn an exciting hybridisation. 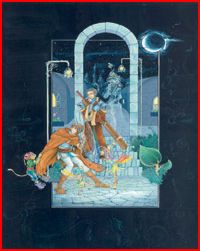 Unlike fable and fantasy, Abdul Rahim, the second participant in the show, took his cues from an entirely different stance. His miniatures are inspired by the familiar thematic and stylistic nuances of a certain school of thought known to explore spiritual and metaphysical content in their paintings. His compositions are extremely introspective. The grids, cells and meditative postures spell inner conflicts and captivity of the soul while the clouds, celestial bodies, halos and winged inferences indicate flight or spiritual release. The artist has considerable drawing and painting skills but his compositions are often based on a stiff and severe division of space and he uses a somber palette of browns and yellows which constrains the viewing experience.

Ahmed Ali Talpur has already exhibited works from his board game series a number of times. The current collection comprises profiles of Muslim royalty and military commanders of the subcontinent in earlier centuries. Particularly noticeable are the headgears, the style of beards and ethnic origins of the subjects as distinguishing characteristics. The inference is obviously political as is the title, ‘Game Over.’