The extensive coverage of Pakistan in the international press in the aftermath of the Lal Masjid tragedy included a report by Somini Sengupta in The New York Times that begins with a quote from Hameeda Sarfraz, a 19-year-old Jamia Hafsa alumna. Explaining the attraction of the hereafter, she says: “In heaven you get everything without hardship. In heaven, if a martyr feels hungry, food appears, the best-quality food, and you won’t even know where it came from.” 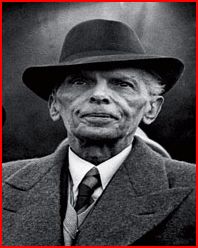 The combination of innocence and delusion in her line of thinking offers an indication of where the urge for martyrdom springs from in so many young Muslims. But her words also seem to encapsulate one of the core problems that has dogged Pakistan over the years: too much faith, not enough food.

It could be argued that the faith bit is not particularly surprising, given that the nation was forged on the basis of religion — a distinction it shares so far with only one other country, namely Israel. But there are more ways than one of interpreting that fact.

Over the past few decades, the notion that Pakistan was created in the name of Islam has acquired the status of received wisdom. What Mohammed Ali Jinnah aspired for, however, was a separate homeland for the subcontinent’s Muslims. Which isn’t quite the same thing. In fact, Jinnah was averse to the concept of an ideological state, an attitude that earned him the epithet “kafir-e-azam” from the Islamists of the day — whose successors subsequently appointed themselves guardians of what they called the “ideology of Pakistan.”

By the time he died 13 months after Partition, it is said Jinnah was despondent about the consequences of his achievement. He had by then discovered the inadequacies of his lieutenants and presumably regretted his inability to leave the infant nation in good hands. It is also more than likely that the scale of the holocaust that accompanied independence took him completely by surprise. It is unlikely he could have guessed that a little more than two decades hence, the Muslims of the subcontinent would be divided more or less equally between three discrete homelands.

For most of those two decades, however, Islam did not weigh too heavily on the national consciousness. It remained largely in the background of Pakistan’s political and economic developments and travails. Despite the overwhelming Muslim majority, demands for a strict application of Islamic laws were restricted to the margins of society. This wasn’t an indication of the widespread absence of faith, but most people simply took religion in their stride. Being devout did not necessarily constitute a barrier to enlightenment. A tradition of healthy disrespect for the mullah sat comfortably alongside a system of belief in which a clerical class is supposedly superfluous.

Looking back, I can recall only one Independence Day celebration when there really seemed to be something worth celebrating. The country turned 25 that August. The mass murder in East Bengal — a monumental crime for which Pakistan has never adequately atoned — was at the time a very recent memory, but Yahya Khan was gone and a freshly liberated Bangladesh offered cause for hope. Furthermore, there was evidence that democracy was taking root in Pakistan. The nation’s first elected government had introduced land reforms, and the ruling party had honoured the popular mandate in the smaller provinces by inviting other parties to form governments in NWFP and Balochistan. The following year, Pakistan had a new constitution based on a parliamentary consensus.

The potential for things going awry had never receded too far from the surface, however. The illusion of placid progress didn’t last very long. A few years later, when I travelled abroad for the first time, I left behind a troubled semi-democracy. A year or so later, I returned to a troubling dictatorship. I arrived back on an inauspicious day: it was the day Z.A. Bhutto was taken into custody for the last time.

The absurdly conducted murder case against him wasn’t the only foul portent. There were public executions and floggings that attracted large crowds, and amid all this vulgarity and obscenity, one was confronted with street signs demanding an end to uryani and fuhashi. Chadar and chardiwari was the official prescription for all womankind, and it had a devastating effect in some parts of the country. When I moved from Lahore to Karachi in the early 1980s, it seemed a decidedly saner place, not least because society did not appear to consist solely of males; in Lahore, women had almost vanished from the streets. Of course, Karachi’s sanity, such as it was, didn’t last too long: by the middle of the decade, ethnic riots and curfews were the norm, and the metropolis has never entirely recovered from those ordeals. 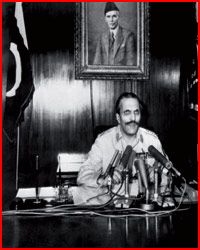 Perhaps the same could be said about the country as a whole. The lasting damage from ubiquitous invocations to prayer and other such irritants may not seem particularly grave, but let’s not forget that it took more than 20 years to rescind the odious Hudood laws. In recent years it has become painfully clear, however, that the excruciating Zia regime’s deadliest legacy stems from its decision to embroil Pakistan in Afghanistan’s troubles. The heroin-and-Kalashnikov culture was an immediate consequence of that decision, but its longer-term repercussions have proved even more toxic.

And it is extremely difficult to have any confidence in the healing powers of the present general, the self-anointed champion of enlightened moderation, when there’s evidence that he does not understand the prime causes of the malady for which he claims to have a cure. His autobiography, for instance, makes a couple of ever-so-mildly derogatory passing references to Zia-ul-Haq’s obscurantist excesses, but his Afghan misadventure does not even come in for muted criticism. If anything, Pervez Musharraf seems to regard Pakistan’s participation in that so-called jihad, alongside the US and Saudi Arabia — a jihad, mind you, that spawned, inter alia, Osama bin Laden and the Taliban — as somehow obligatory. He, or whoever ghost-wrote In the Line of Fire, even trots out the silly old Cold War myth that Moscow’s intervention in Afghanistan was in pursuit of the Soviet yearning for a warm-water port.

Musharraf isn’t, of course, the only one unwilling to acknowledge the glaring contradiction between participation in a jihad as well as the consequent counter-jihad. Hardly any Americans will admit that the former allies they have now pledged to destroy often use tactics gleaned from terrorist manuals prepared for the mujahideen by the CIA. Pakistan, meanwhile, can lay claim to a certain continuity: in the 1980s it played the American game, and now it’s doing it again.

I moved out of Pakistan about 20 years ago, a year or so before Zia’s remains rained down from the skies. That was a riveting moment, and the army’s decision at the time to hold elections and allow a civilian government to take over appeared to herald a turning point, even as the ISI strove to cobble together the Islami Jamhoori Ittehad as a means of keeping the PPP and Benazir Bhutto out of office. The endeavour was only partially successful, but one thing became clear over time: the army had ceded office, but not power. Poor governance and galloping corruption meant that the two truncated terms that Benazir and Nawaz Sharif were each allowed proved abysmal in a variety of ways, but it’s important to remember that the men in khaki were never quite out of the picture.

From a distance, Pakistan looked like a mess; on closer inspection, it invariably turned out to be worse than one suspected. It wasn’t the sort of not entirely unhealthy chaos that accompanies democracy in countries such as India. There was something more insidious about it. And one can only wonder whether the quality of democracy would improve with age. In Pakistan’s case, no one has ever had the chance to find out.

My initial years of self-exile (regularly interrupted by visits to Karachi and Lahore, and on one occasion to Islamabad, to interview the first female prime minister of a Muslim country) were spent in Dubai, which hardly felt like a foreign country, although its relatively relaxed approach to social mores was a welcome change. It wasn’t far away, however, to offer the option of disengagement. However, 10 years ago my family and I opted for a considerably more distant shore, some 15 hours away by direct flight (but there are no direct flights).

Does this degree of distance afford a remarkably different perspective? Well, it probably would have a decade or two ago, but the stupendous advances during this period in means of communication have changed all that. If I were thus inclined, it probably wouldn’t be too hard to gain access to a Pakistani television channel or two, but access to online newspapers suffices as a means of staying in touch. Which isn’t, of course, the same as being there: the level of engagement is necessarily rather different.

I visit regularly, albeit briefly, and am prone to mixed feelings at both the emotional and the intellectual levels. There are occasionally welcome signs of progress: for instance, the road network in Lahore has, in recent years, been embellished with an elaborate series of over- and under-passes. But there is invariably a downside: traffic congestion in the Punjab capital is worse than ever, not because of the structural adjustments, but because the number of private vehicles has risen manifold. Is that a sign of greater prosperity? Yes, but the distribution of wealth remains as inequitable as ever. If the well-off are multiplying, that is one sphere in which the poor are able to keep up.

And we are blessed with leaders who believe there’s no harm in enriching the few, because the wealth will trickle down. Where in the world has an adequate — or even a semi-adequate — redistribution of wealth been achieved on this basis, outside the mind of Milton Friedman and his acolytes? Were the theory practicable, wouldn’t absolute hunger have been abolished in all capitalist societies? It certainly hasn’t happened in Pakistan, which partially helps to explain why so many madrassahs are thriving. Another reason is that the defence budget has always enjoyed priority over the education and health budgets.

Where will a sexagenarian Pakistan go? How long will it continue to be hounded by the ‘Terrorism Central’ tag? Could, heaven forbid, Iraq be the template for what lies ahead? I’m not sure whether being physically closer to the country would make it any easier to answer such questions. The food/faith dilemma remains unresolved. And the mixed feelings linger on. I couldn’t possibly hope to express them better than Faiz: