“The whole of my … estate shall be… annually distributed in the form of prizes to those who, during the preceding year, shall have conferred the greatest benefit to mankind… It is my express wish that in awarding the prizes, no consideration should be given to the nationality of the candidates, but that the most worthy shall receive the prize… “

“I have met presidents, prime ministers and reigning monarchs. Until meeting the Pakistani social worker Abdul Sattar Edhi, I had never met a saint. Within a few moments of shaking hands, I knew I was in the presence of moral and spiritual greatness.”

“A legendary charity worker known for his asceticism.”

“… The greatest living humanitarian in the world.” 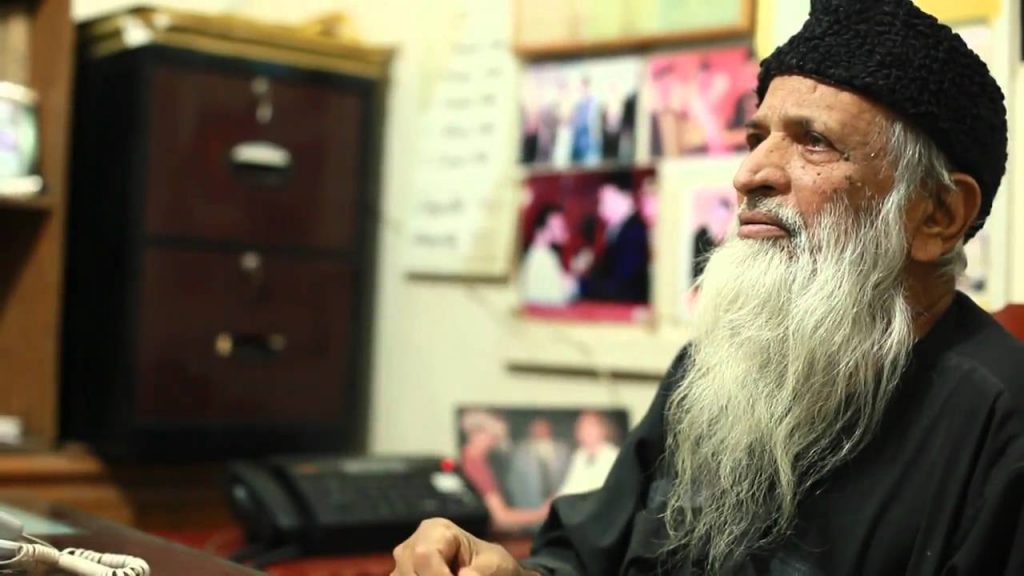 For 60 years he has silently straddled the globe like a colossus, halting crossfire in the heat of battle in local and international war zones to retrieve and rehabilitate the wounded, and to bury the dead. He has established 350 welfare centres and homes in towns and cities across Pakistan for the infirm, the aged, drug addicts, the disenfranchised and desperate, the mentally and physically challenged, and for over 50,000 orphans. He has organised the largest, free ambulatory network service in the world and trained more than 40,000 nurses. He has installed cradles in locations across the country for unwanted infants, retrieved babies abandoned in dumpsters and garbage lots, and then proceeded to ensure they — numbering more than 20,000 at last count — are provided loving homes. He has established a marine service which recovers the remains of drowning victims, air-drops emergency food supplies to people on stranded ships, and helps navigate safe passage for lost ones. He has set up blood banks, shelters for animals, burial services for unclaimed corpses and for the impoverished who cannot afford them. His foundation runs a prisoner’s aid department to address the concerns of inmates in jails across Pakistan, a missing persons service, and a cancer research hospital. The list runs on…

Abdul Sattar Edhi has, with no trumpets, no fanfare, donned the mantle of saviour for a nation where successive governments seem to have all but abdicated responsibility for social welfare. And his outreach spans continents, with Edhi “relief operations in Africa, the Middle East, the Caucuses region, Eastern Europe and the USA,” according to Wikipedia, and many, many millions the recipients of his beneficence.

Edhi is a man of many titles, all of which he rubbishes. Perhaps it is the moniker of ‘Maulana’ bestowed on him, however, of which he is most disdainful. From the very outset, he says, he knew destitution, disease and death do not recognise caste, creed or colour. And so he chose to address the dire need he saw everywhere by ignoring altogether any of these attributes. Unsurprisingly, in the course of his long humanistic odyssey, he was reviled by the community he belongs to and by proponents of religious orthodoxy whose cloistered world view and obscurantist ideology he has obdurately refused to subscribe to, even denigrated publicly, sometimes at great cost to himself.

Edhi shrugs off the threats. “Death is the only certainty in life and no one is immune, so why live in fear?” he once said to me.

That he lives this, and all his truths is evident in everything he does: in the many discarded illegitimate infants he breathes new life into — irrespective of sermons on sin emanating from pulpits, in the adamancy to provide care for wounded cops and criminals alike — regardless of the admonitions of custodians of the law, in the rage he reserves for hirsute beturbanned panhandlers begging for alms to construct yet another mosque in a mosque-laden locale. “You can pray anywhere — go build a hospital or school,” I heard him shouting as he chased the two men soliciting funds out of his inner-city, open-air office, slipper in hand, all those years ago.

For decades Edhi has been lionised, fÃªted and adored — despite himself. In his reluctant first ever interview with an English publication he said, “You people will ruin me. I negotiate the busy streets of Karachi night and day, I go to peoples’ homes to administer burial rites for their loved ones, I travel to foreign lands, unrecognised, unhindered. Now I will be known. What’s more, I might acquire that hateful thing — an ego. No more interviews.”

But brusque and camera-shy as he has stubbornly remained, resolutely impatient with social niceties and graces, this enduring cornerstone of the nation’s conscience and salvation, remains the media’s all-time favourite story. And he still has no ego.

Abdul Sattar Edhi’s journey began long before his first active foray into philanthropy 60 years ago. As quoted in his biography, Half of Two Paisas: The Extraordinary Mission of Abdul Sattar Edhi and Bilquis Edhi by Italian writers Lorenza Raponi and Michele Zanzucchi, when he was a little boy his mother would give him two paisas daily, one to use for his own needs and the other to give to any needy soul he encountered. That was perhaps the genesis of his lifetime of social service. He worked, saved enough to buy an old van, which was in the following years to be used for endless missions of charity, set up a free dispensary for needy patients next, and finally launched the Edhi Welfare Trust with a seemingly ever-expansive mission.

A lifelong insomniac by his own reckoning, and a man in a hurry because, as he has repeatedly maintained, “Get on with whatever you have set out to do now; time waits for no man,” alongside his myriad daily humanitarian projects, Edhi would drive his van through Karachi’s deserted streets at night, picking up individuals in drug-induced stupors, the walking wounded from battles on the city’s mean streets, and the corpses of shelterless, anonymous souls left to rot on footpaths, and take them home to rehabilitate — or bury — them.

After many failed attempts at securing a partner with whom to share his life, Edhi met the woman with what he says is “the patience of a saint.” She would become his wife and it was to be a match made in heaven. Bilquis Edhi not just mirrored her husband’s passion for philanthropic work, but developed a deep, abiding love for him, manifest in quick, unabashed embraces, to which I have been witness, forgiveness when he strayed, and in the obvious joy of just being with him in the penultimately basic dwelling he has always called home. 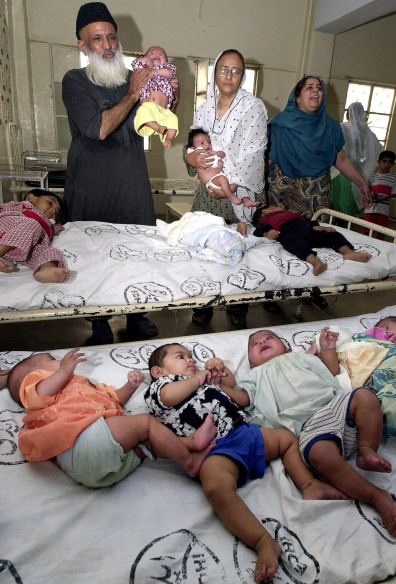 Notwithstanding children — and a parent’s only natural ambition to provide well for them — notwithstanding huge, no-questions-asked donations from home and across the world, the Edhi lifestyle — or lack of one — remains unaltered. As do the ostensibly impossible tasks he sets himself.

Edhi will find a way to get to the killing fields of Sabra and Shatila and manage to secure a temporary ceasefire to retrieve the dead and provide them decent burials, he will be in Africa in times of famine, in Bangladesh in times of flood, in the United States at the time of Hurricane Katrina, and always, everywhere at home: earthquakes, bomb blasts, suicide detonations. He will be wherever he is needed, whenever he is needed. The statistics speak for themselves — and those are just the tip of the iceberg.

Now well in his eighties, Abdul Sattar Edhi, a patient of renal failure and regular dialysis, frail, weary and soul-sick in the face of his country’s long night of darkness — extreme terrorism, grinding poverty and menacing religiosity — still forges on. His children are active members of the foundation he created, his wife its guiding spirit, and he forever its fountainhead.

So why, I wonder, as does a nation and as do wide swathes of the world touched by his beneficence, has Abdul Sattar Edhi not yet been awarded a Nobel Prize for peace.

Against the backdrop of the list of recipients of this prize over the years, there are many that are questionable, some unarguably controversial. Among them are those who have secured the honour for opening up “opportunities for a new development towards fraternity in the Middle East.” More than two decades later, there is no opportunity, no development and even less fraternity towards or in that part of the Middle East that Arafat, Rabin and Peres were credited for helping.

In 1991, Aung San Suu Kyi was awarded the prize “for her non-violent struggle for democracy and human rights.” Apparently, that struggle was a selective one. Many years later, the world bears witness to Suu Kyi’s virtual silence on the terrible plight of Myanmar’s persecuted minority community, the Rohingyas.

“Any comparison with the Red Cross, Save the Children, MÃ©decins Sans FrontiÃ¨res (Doctors Without Borders) is literally impossible. All these organisations are excellent in their own field of action, but none of them covers such a wide area of human needs,” said the Italian ambassador to Pakistan, Sergio Romano, when the Balzan Prize was awarded to Edhi.

A Nobel Peace Prize for Edhi has long been clamoured for in Pakistan and beyond. In 2011, when then Pakistan Prime Minister Yousaf Raza Gillani recommended Edhi’s name to the Nobel committee, this plea became official.

The prize has not been forthcoming.