Lubna Agha had a penchant for stylistic exploration. She combined the allure of stylistic diversity with an organic response to the physical environment she inhabited. Her empathetic synthesis of styles and environment, as revealed in her artworks over the decades, is showcased beautifully in the first retrospective dedicated to her oeuvre, at the VM Gallery. 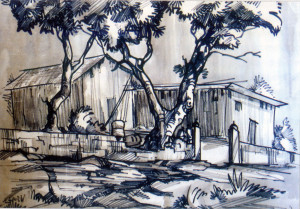 Under the thoughtful curatorship of the gallery’s director, Riffat Alvi, artworks representative of Lubna’s copious output have been assembled from private collections including that of Lubna’s husband, Yusuf Agha. Riffat speaks passionately for the need to acknowledge the artists who have laid the foundation for the development of art in Pakistan. The works are arranged chronologically in five divisions that span the period from 1963 to 2012.

As one enters the new wing of the VM Gallery, where the retrospective is displayed, a narrow passage balloons into a generous hall. But it is in this passage that the circuit of Lubna’s earliest and latest works is complete. The contrast is remarkable. It provides strong evidence of Lubna’s eclectic nature which found expression in a plethora of styles and media.

Lubna was set on discovering a path of her own and her journey resembled the course of a meandering river. The resonances from schools of art — near and afar — mark the changes in her wandering course.

The vignettes of Karachi scenes such as a watercolour, ‘Snakecharmer’ (1965), and old houses in a pen-and-ink called ‘Under the Golimar Bridge’ (1967), have echoes of the Bengal School that were carried over to Pakistan by artists such as Chughtai and Mansur Rahi. 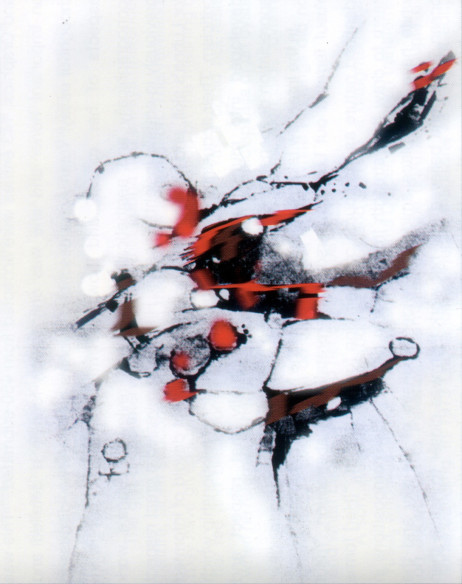 A sojourn in London in 1970 transformed Lubna’s style from realism to one of colour abstraction. Lubna acknowledged the powerful influence Nicholas de Stael’s colour abstractions had made on her. In a cheerfully titled three-person show called The Anti-Depressionists, which was held at the Arts Council Karachi in 1971, Lubna explored tenuous landscapes that had almost entirely relinquished line to colour abstraction. Her co-exhibitors were Ahmed Parvez and Aftab Ahmed. All three were consciously reacting to the grim atmosphere of political tension that would lead to the break-up of the nation at the end of the year.

Lubna’s so-called ‘White Paintings’ from 1971 to 1980 saw the maturation of abstract style where abstraction shifted from a representation of the outer world to that of subjective expression. Lubna stated: “My work dealt with the inner world; the world of the sub-conscious.” 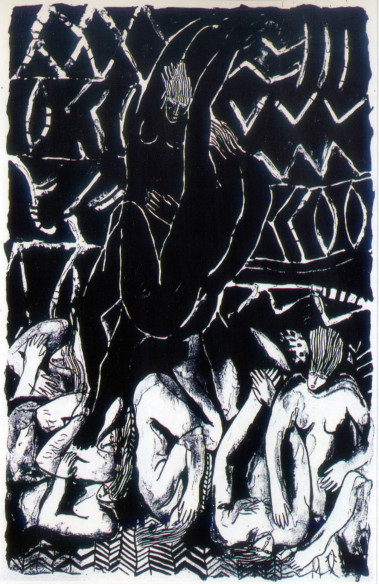 The exploration of the inner world did not come at the expense of the outer one. Lubna was highly responsive to her geographical environment and her relocations were recorded through paintings. The aspen trees of Colorado rendered in broad brush-strokes, the winters of Boston, the Arabesque-patterned symmetry of Moroccan screens — all attested to an open-minded approach to life and art.

Kandinsky’s assertion that “A first encounter with any new phenomenon exercises immediately an impression on the soul,” befits Lubna’s sensitive responses to stimulation from new horizons. 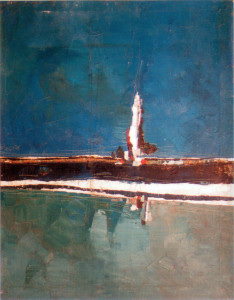 After her abstract phase, figuration re-emerged in the ’90s. In black-and-white etchings and lithographs, in watercolours and oil canvases that were saturated with primary colours, primordial figures were packed closely on the canvases, harmonising line and colour and appealing to a non-rational engagement. In contradistinction to the imaginary worlds, there are in the same period, works such as ‘Ja-naamaz and the IMF’ (2001) which indicate a deep concern with global issues. 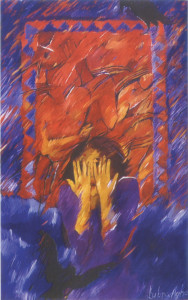 Walking the path through Lubna’s work leaves one with mixed feelings. On the one hand there is the enjoyable exuberance of an artist who clearly was comfortable in her own skin, whether at home or abroad. Yet, the intellectual frontiers on the home front have undergone huge radicalisation from the Pakistan that existed when Lubna was coming into her own as a young artist in the 1960s. The cultural topography of the country that allowed meandering souls to do so in peace has changed significantly. The retrospective is as much an invitation to get to know Lubna Agha as it is to know the world from which she emerged but by which she was never held back.