The questions that disturb me most, that sting me as a Pakistani Muslim living in the capital of the United States of America, that make me feel that maybe it won’t all be okay after all, fall into the ‘you-belong-there-and-not-here category.’

You might be familiar with that world of subtle (or sometimes quite direct) hurt.

Being in the US and needing to explain why ‘my people’ (what is that construct, anyway?) aren’t condemning terror attacks apparently done in our name. In addition, I’m told, sometimes by liberal well-wishers and often by fear-mongers with megaphones on televisions, or outside Muslim community centres, it would be lovely if I could explain what the terror thing is all about and also pitch in a detailed but digestible summary of the Quran.

I want all the time to yell out that my knowledge and my authority have limits, that what I can say is that ‘my people’ are the primary victims of such terror — that most of Daesh’s targets are Muslim Arabs, that Pakistan has lost more of its population to armed extremism than almost any other country.

I want to roar. But I won’t, of course, because I need to be the polite ambassador, the well-educated, perfectly groomed bearer of a calm, reasoned message. This choice isn’t only about civility. It’s also about survival. Growing up in a place where people with unpopular opinions are murdered, sometimes by those empowered and constitutionally bound to protect them, showed me that skepticism and fear and ignorance can soon turn to violence. As a reporter, I receive updates from the Council on American Islamic Relations — a consistent litany of anecdotes and statistics detailing anti-Muslim behaviour around this country that I’ve found so welcoming for so long. As a curious worrier, I read about trends that scare me — and I’ve been morbidly fascinated — as one might be by information about a creeping epidemic — by research the Center for American Progress has done on fringe anti-Muslim groups trying to shape the national narrative about Muslims in America. 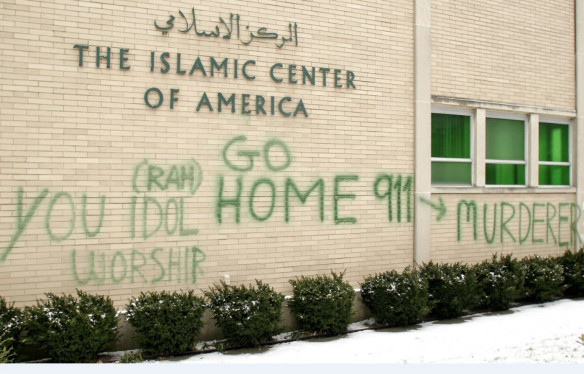 So I and many others live daily with the conundrum of wanting to keep our distance from radical Islamist terror, but being called upon — because we are the easily associated “other” — to explain, dissect and denounce it. This is a version of “call it by its name,” the attack some Republicans launch against President Barack Obama to slam his approach towards the Islamic State group, as though the battle to end extremism were simply one to guarantee more exact phrasing.

This kind of ‘othering’ shapes each day. I can joke about it, telling friends and coworkers that the Islamic Republic of Pakistan’s rules stop at the homes of Muslims with their own definitions of what behaviour they are comfortable with, and that sure, I did go to high school on a camel flanked by armed guards. But I can’t, through chuckles or intimacy or achievement, make it go away.

I’ve known this for some time. What I’m only realising now, after spending three weeks back in the old home where some residents of my new home wish I had stayed, is that there’s no easy respite for this sense of feeling like an other. Little by little, I’ve begun to feel in Pakistan like an awkward half-breed in a different way.

Unbeknownst to me, my body began in Pakistan to surreptitiously attract any US-related conspiracy theory, grievance or tale of woe in a pretty broad radius. I didn’t know how far humans could become magnets, and suddenly I’d become a red, white and blue one. I faced a line of questioning equally forceful as any I’ve gotten stateside. Why is Washington so hell-bent on suppressing the Muslim world? Why did Obama create IS with Israeli and Saudi help, rather than recognising that Syrian President Bashar al-Assad — whose tyranny and duplicity are the focus of much of my writing — is the region’s great white hope?

I tried again to keep my composure. If I did feel pressed to argue, I’d rely on facts, speaking of what strategic concerns might really be driving US policy and how many Americans go out of their way to embrace Muslims. There was a limited audience for this unexciting approach. What seemed more popular was calling me a fool, a stooge or, in two memorable instances, in remote parts of the country I was visiting for the first time, a CIA operative.

Here, too, there were jokes, laughs about ‘my old friend’ Donald Trump and about my now doing X or Y thing “like an Amreekan.” But more often than not, there was also a slight unease — a distance that was tough to bridge and tougher to talk about in the limited time I had. My roots may be deep here, but perhaps I’ve grown too far out.

In 2016, I don’t want to abandon either of these two places I love.

Instead, I want to name the othering — then try to use it.

There’s something liberating about being just a little removed. As you try to understand and inform, you can do it your own way, less bound by rules because of your connection to “there.” Strangeness can be almost a halo. That might not mean much added license, but it’s enough to thrill thinkers — or reporters who are trying to piece together reality, helping it rise above misunderstandings, prejudice and imagined intrigue.

It’s tiring, tiring work. But I think it’s the best way I can reconcile the tensions between these communities that have shaped me. I don’t think I’m alone. There are many of us in the burgeoning, proud community of the ‘not-quite-here,‘ thousands who reject the idea of ‘you-belong-there-and-not-here.’ Something tells me we won’t accept that notion quietly for much longer.