On July 21, heavy rains in Kohlu and Barkhan caused raging torrents to sweep through many areas of Balochistan, but it was the waters that entered from Sindh that marooned entire districts.

Over 500,000 million people from Jafarabad were rendered homeless and had to migrate to the neighbouring district of Naseerabad and other safer areas, as Jafarabad lay submerged. Flood waters from Sindh also played havoc in the Jhal Magsi district, home of Balochistan Governor Nawab Zulfiqar Magsi.

In addition to the large number of Internally Displaced Peoples (IDPs) from Jafarabad, over 600,000 million flood affectees have also arrived from Jacobabad and other areas of Sindh, to take refuge in parts of Balochistan.

The provincial disaster management authority had issued timely warnings about flood waters from Sindh affecting the adjacent districts of Balochistan, including Jafarabad and Naseerabad. “We had informed the administration of Naseerabad about the possible devastation before the entry of the flood waters from Sindh, but no proper measures were taken to minimise the damage,” an official told Newsline.

According to sources, 48 people have died because of the floods in Balochistan, while 50 others are missing. Flood waters have destroyed 57,000 houses in 11 districts of the province, and damaged standing crops on over 600,000 million acres of land. According to provincial government officials, losses close to one hundred billion rupees have been incurred.

Authorities in Balochistan say they are not equipped to provide relief to the large number of affectees in the province. And in the absence of proper arrangements, flood victims in Balochistan face disease and starvation. While they were able to save their lives, the flood victims are living under the open skies without proper shelter, food or clean drinking water. According to Raheela Durrani, the person in charge of relief operations from the provincial government, Balochistan will have to approach the federal government to compensate the people.

Like in other parts of country, there is the general impression that this disaster was man-made to a great extent, and that landlords and other influentials are responsible for the widespread devastation. 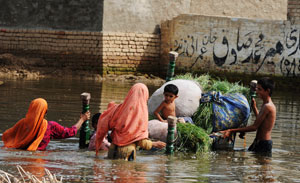 Former prime minister Mir Zafarullah Khan Jamali blames Syed Khursheed Shah, Ejaz Jhakrani and other landlords for the abysmal state of Jafarabad and other areas of Balochistan. “To save their agricultural lands, not only was a breach created in Tori Dam near Guddu Barrage in Sindh, but also the bypass near Jacobabad,” says Zafarullah Jamali, adding that federal minister Ejaz Jhakrani also did the same to save the Shahbaz Airbase in Jacobabad.

The Balochistan government has taken serious notice of these allegations and approached the federal government. “President Asif Ali Zardari has assured the provincial government that investigations will be made to determine whether the breach in Tori Dam was caused deliberately,” says Raheela Durrani.

Political parties in Balochistan, particularly the National Party, strongly protested against the breaches made by federal ministers, and have demanded a judicial enquiry into the matter.

While Jafarabad’s influentials are pointing fingers at Sindh’s feudal lords, residents of Dera Allahyar are blaming Mir Zafarullah Jamali for drowning their city.Flood waters have rendered homeless 200,000 million people in Dera Allahyar and its surrounding areas.

On August 14, when the waters were close to Dera Allahyar, people of the area demanded that a breach be created in the bypass near the town, but Zafarullah Jamali did not allow that to happen in order to save his area and agricultural lands, alleged an angry crowd speaking to Quetta-based journalists. The flood waters, however, went on to ravage Jamali’s ancestral lands in Rojhan Jamali after sweeping through Dera Allahyar.

A breach was made in the bypass near Dera Allahyar after nine days to reduce the water levels in the town, but to no avail. Sources at the irrigation department in Balochistan reveal that had the breach been allowed on the first day, at least the district headquarter and its surrounding areas could have been saved, and the water level would not have exceeded more than one to two feet.

Despite their exploitation at the hands of the landlords, the poor have always voted for them. And the landlords, instead of saving their people, didn’t hesitate even once to let them drown to save their own lands.

Apocalypse Now by Sairah Irshad Khan
The floods have stripped bare the ugly face of a feudal-sardari system and its umbilical connect with politics and bureaucracy that have together created an underclass so wretched that it has nothing left to lose.

Flood of Sorrow by Talib Qizilbash
Khyber Pakhtunkhwa is a region that has suffered through years of turmoil: suicide bombings, Taliban rule, military operations and displacement. The floods are just the latest blow. But how much can its denizens take?

Religious Mission or Political Ambition? by Shahzada Irfan Ahmed and Ayesha Siddiqa
With their well-organised relief efforts, the religious and militants outfits pose the threat of making significant inroads in the flood-affected regions.

Disastrous Winds of Change? by Afia Salam
Are the floods in Pakistan a result of climate change or are they human-induced?

Technology to the Rescue by Sana Saleem
ICT and social media tools are being used to map and garner support for individual relief efforts.