Using different mediums, art teachers Seema Nusrat and Haider Ali Jan explored unusually varied themes in their exhibition at Canvas gallery last month. While Jan worked with the traditional mediums of oil paint on canvas and graphite on paper, Nusrat worked in the three-dimensional, using leather belts to construct her installations. Both brought a refreshing perspective to their work.

Jan, a recent graduate from Beaconhouse National University, explores his self and his environment in his work. ‘Self Portrait I’ is a straightforward figurative drawing that shows Jan staring at his own nude reflection, as he stands amidst darkness. His bare skin projects him as vulnerable, inhabiting a space wherein he willingly objectifies himself.

In ‘Self Portrait II,’ the artist takes refuge behind a string of rose petals. This alludes to the practices related to Muharram — the month in which Shia Muslims commemorate the martyrdom of Imam Hussain. The artist explains how this month assumes a carnival-like atmosphere, “where everything is exaggerated and everyone is involved in some sort of performance.” Jan explains that his work is part of his struggle to make sense of the world around him. He uses the theme of Muharram to explore and unveil “the element of performance” that has become integral to our lives and religious practices.

His monochrome graphite drawings, juxtaposed with the richly coloured oil paintings, add an interesting visual variation to the display. In a drawing titled ‘Dance,’ Jan shows a pudgy man performing maatam — the physical act of mourning. The performance of maatam is exceedingly emotional. Musical and rhythmic variations are sung to the crowd that joins in, carrying on the rhythm by the metrical striking of hands against the chest. This is meant to create a powerful continuity of the suffering. However, Jan trivialises the religiosity by comparing it to a dance move. The title almost seems to mock the sincerity behind the ritual, wittily drawing attention to the different ways of perceiving the male figure’s action, ranging from it being a spiritual act to a leisure activity.

Seema Nusrat, an Indus Valley graduate, diverges from the traditionally painted surface and focuses on her sculptural works. She uses leather belts and buckles to create ornamental designs and shapes. Her works always retain an ambiguous relationship with the body — each object is purposefully chosen for its relevance to the body and has underlying meaning. 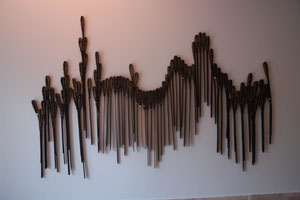 Throughout her career, Nusrat has worked with paper and garment to create her sculptural forms. In her trademark installations she used hundreds of ties — twisted, knotted and folded — to create a sculptural mass. The tie, like the belt, is a symbol of masculine authority. However, its fluidity of form allowed Nusrat to contest fixed gender boundaries.

In a previous exhibition, Nusrat had used belt buckles to construct an armour-like female ensemble hung from the ceiling. It confronted the viewer with a conflation of masculinity and femininity, repression and violence. With a new sense of empowerment, the artist hijacked this symbol of masculine power and potency, and recontextualised it within a feminine, concave form.

In this exhibition, Nusrat takes a different direction, using the belts to create reliefs. She continues her explorations of gender with her works registering a strong sense of contradiction and uncertainty. She uses the leather belt to create feminised, decorative designs, which contradict its use as a symbol of masculine power. The verticals created confirm the belt’s phallic association, while the presence of fluid feminine forms contradict such a simple gender binary. The fluid forms could also show the artist’s desire to claim the male body as a source of pleasure.

Viewed together, both Jan and Nusrat encourage the viewers to rethink their pre-conceived notions — be they about religious activities or gender identities. While Jan concentrates on the performance of religious rites, Nusrat contests the existing notions of gender. Both, in different ways, contest mainstream viewpoints.