The mob violence in Sialkot in which two brothers were battered to death has only confirmed that the malady affecting Pakistan is not limited to the actions or omissions of the state, but is also rooted in the social conduct of the people in general. Exposure to public hangings, whippings, stoning to death and other such spectacles arranged by the state machinery or religiously motivated vigilantes has further contributed to the tolerance of violence by a society that has historically practiced violence as a culture. Killing women in the name of honour, inflicting torture on children in the name of discipline and cruel, inhuman and degrading treatment meted out as a means of public humiliation of the weak by the powerful is not only practiced with impunity but also accepted and defended by a large section of society.

These trends have manifested themselves in several incidents of collective violence that have come to light more recently. In Karachi, a mob killed two men alleged to be dacoits and set the dead bodies on fire. In Gojra, a crowd attacked a Christian community, killing eight persons and torching churches and other property. In Gujranwala, a man accused of defiling the holy Quran was killed by a mob and his body dragged in the streets. Lack of effective action against those responsible for these crimes and a perverse glorification of such trends has encouraged others to follow suit.

In the wake of the incident in Sialkot, police officials and government ministers in the Punjab have acknowledged that in the Gujranwala district of the Punjab, the police, at the highest level, have indulged in extra-judicial killings of alleged criminals and paraded their dead bodies in the streets as trophies of police “efficiency” and “bravery.” Such practices have heightened public appetite for display of violence and encouraged citizens’ participation in criminal acts committed collectively as a mob. We have also seen footage on several national television channels of the police publicly torturing people and being watched by a crowd that showed no emotion other than a morbid curiosity. In the case of the Karachi incident, the camera recorded the crowd cheering and clapping as the degree of brutality on the victims increased. 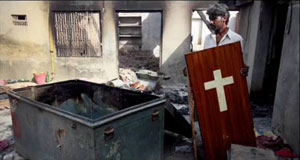 The carnage in Gojra, where a Christian community was targeted by mobs.

That there are a significant number of people in this country that support, justify or condone such practices is most disconcerting. There is no denying that the police are corrupt, the judicial system a failure and criminals are confident in their ability to outwit the law. These realities can, however, never be a justification for a state to adopt barbaric practices to make up for its failures or for a society to fall below the standards of civilised behaviour. On the contrary, these weaknesses must become the reason to make every effort to strengthen the support for the rule of law. Resort to rough and ready means is not justice but revenge. Unfortunately, this misconceived idea of justice prevails in the minds of a large section of the population.

Under the Constitution of Pakistan it is the inalienable right of everyone to be dealt with in accordance with the law, and “no action detrimental to the life, liberty, body, reputation or property of any person shall be taken except in accordance with the law.” No one is exempted from the imperative of respecting this principle, whether they are agents of the state or individuals. Self-righteous anger that leads to violent crime by the public will not protect those participating in such crime from prosecution and punishment. The law is clear that each individual will be liable to punishment for the crime committed with a common intention, regardless of what role each one played in the commission of such a crime.

This principle of vicarious liability applies to the incident in Sialkot, and should have been applied to other cases of mob violence in the past. A crowd of people that stand by and allow some from amongst them to batter two people to death are no less than abettors in murder. The police involved are guilty of aggravated crime as they not only participated but also failed in their obligation to protect life or to apprehend those who were committing murder in their presence. Mere disciplinary action against the members of the police will not suffice. They must be prosecuted in accordance with the law.

Instead, we have seen that officers against whom there are serious allegations of fake police encounters in which extra-judicial killings were committed have been commended and honoured with awards. Punjab’s Gujranwala district is a case in point, where incidents of extra-judicial killings received encouragement and support from the authorities and other influential citizens. The concerned police officer received commendation from no less a person than the chief minister of the Punjab. After the public outcry on the Sialkot atrocity, the police officer was transferred from this post, but no action has been taken to inquire into the serious allegations against him.

Accountability of the police is the first step in achieving any measure of justice. The Police Order 2002, imposed by the Musharraf regime, swept away the previous system of policing and imposed a new system that failed to address the problems because of the flaws inherent in the new legislation. Even the mechanisms required for the new order to function were never properly established. The Public Safety Commissions or the Police Complaints Commission is not functional. People fear reprisals if they lodge any complaint against the police. Threats to journalists who exposed the Sialkot incident prove that such fears are not misplaced. There are no witness protection programmes that give a sense of security to people so that they can come forward and provide evidence to further the prosecution of a crime. Investigations are dishonest as well as incompetently carried out. The judiciary is not up to the standard of competence, independence and integrity that an efficient justice system demands.

Under such circumstances there is little expectation that the perpetrators of the atrocity committed in Sialkot will be held fully accountable. Nevertheless, this incident has renewed the public debate on social trends and characteristics of the state that are continuing to undermine constitutional guarantees of life, liberty and security of person. If this debate is kept alive and public outrage lasts long enough, there is still some hope that collective pressure may force the authorities to refrain from the usual cover-up. If appropriate action follows this incident, it may also serve as a warning to members of the public against the instinct to participate in collective crime. It is an unfortunate reality in this country that the wisdom of upholding the law is often understood when someone close to us becomes the victim of lawlessness. Those who crave for the protection of the law must strengthen the rule of law and not undermine it, even in the name of so-called justice and instant accountability.

This article originally appeared in the September issue of Newsline under the title “The Criminalisation of Justice.”