The floods in Pakistan have been characterised as the world’s worst natural catastrophe in recent history. Much has been said about the Pakistani president’s apathy towards the crisis in the country. The initial response of the international community was far below expectations with more focus on fears of insurgency than concern for the humanitarian crisis. Citizens have lost faith in the government and the international community, but this lack of faith has only sparked a series of relief efforts by individuals from all walks of life.

While individual relief efforts cannot call for donations via mainstream media, social media tools have proven to be far more engaging and effective. On August 14, students of Indus Valley School of Art and Architecture took to the road to show solidarity and collect funds for the flood survivors. This was arranged and advertised using Facebook. Pictures of the event were picked up by the mainstream media, which then encouraged students from other campuses to join in what it called the “Flood March.”

Future Leaders of Pakistan (FLP), a non-profit youth organisation, has been quite active in providing relief in various parts of the country. Its members have been running social media campaigns to raise funds.

“We value the trust of our donors,” says Usama Khilji, membership and mentoring leader of FLP. “Facebook allows us to interact with a larger audience. We publish live updates from our relief efforts and connect with potential volunteers. Many volunteers and donors have contacted us through our Facebook page. We believe in connecting our donors to the families and people they have helped, which is why reports from our efforts highlight the number of families we have helped rather than the amount of funds we have raised. For us, reaching out and helping the flood survivors is most important and for that, people need to be able to relate to these efforts and help us reach out to even more families.”

However, the use of social media and ICT (information and communication technologies) is not limited to advertising. Faisal Kapadia and Awab Alvi, two of the most prominent bloggers, have been using GPS tracking to allow donors to track relief efforts online. This serves as a remarkable tool to ensure transparency, thus motivating others to come forward with more donations, knowing that their money will be put to good use. A considerable number of citizen journalists have also joined the effort by blogging live about their own relief efforts. Live blogging consoles allow users from Twitter to post their messages, making it an easy tool to use while on the go. The console not only has live updates from on-ground teams, but also archives calls for donations, news updates and warning from the flood-affected areas. This creates a portal where all information regarding the crisis is stored.

The use of social media and ICT in times of crisis is not new. During the Haiti crisis, ICT was used to crowdsource crisis information. Ushahidi is one such platform for information collection, visualisation and interactive mapping, used for crowdsourcing crises. Since it is a free, open-source programme, it allows other users to modify it to fit their needs. Users can send reports of events, such as the need for volunteers, food, medical help and shelter, or make an emergency call for those stranded in floods via text message, email, the web and Twitter. 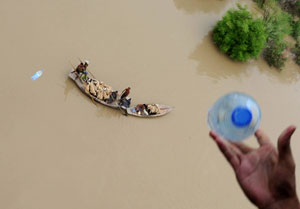 Pakreport.org, set up by Faisal Chohan, uses the Ushahidi platform to map the floods. Chohan’s aim was to provide comprehensive mapping to get a better idea of the on-ground situation and avoid a duplication of efforts, helping communities and relief organisations coordinate relief efforts. “Pakreport.org is a direct connection to individuals on the ground level, and allows organisations and communities to report and access information through maps with complete location details,” says Chohan. “Our message is simple. SMS whatever you see about the floods to 3441 (FL + your message + exact location). Since Pakistan enjoys a broad and burgeoning mobile phone user base, mobiles and SMS are the best way to reach large numbers of people. This is especially true of those areas where only cell phone service remains active and accessible.”

It’s evident that unlike the government, these independent relief efforts are well-versed in the fundamental principles of democracy and transparency. And in the use of social media tools to spread the word and unite the nation in troubled times and steer it out of a crisis.