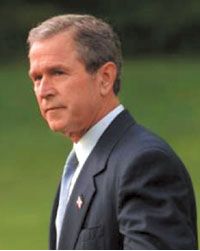 Picture this: not a hundred Osama bin Ladens, as the Egyptian president predicted, but a dozen or so Hosni Mubaraks. Ostensibly benevolent despotisms shrouded in the hijab of bourgeoise democracy. An American base or two in every country. Completely privatised natural resources. A McDonald’s at every other corner. Universal — perhaps even compulsory — access to CNN and Fox. A clutch of disarmed Palestinian bantustans masquerading as an independent state. Israel, not only left with no enemies to worry about, but empowered to act as the regional enforcer, with Zalmay Khalilzad serving as the chief liaison officer. And an uninterrupted flow of oil, its quantity and price determined not in Riyadh or Baghdad, but in Houston.

This shocking and awesome vision of the Middle East is vaguely what the so-called neo-conservatives in Washington have in mind, and at least some of them hope to get there before the end of the decade.

Why “so-called”? Because their adopted nomenclature doesn’t accurately reflect their nature. The only prominent member of George W. Bush’s administration who could be described as conservative is Colin Powell. The rest of them — including Dick Cheney, Donald Rumsfeld, Paul Wolfowitz, even Condoleezza Rice — are fairly radical in terms of what they hope to achieve.

The combination of racist perceptions with imperialist fantasies suggests that neo-fascists would be a more appropriate appellation.

The older members of this gang can trace their provenance back to the Nixon and Ford administrations — and it is surely no coincidence that the idea of directly controlling Middle Eastern oil dates back to the mid-’70s, a period when the rising cost of fuel severely rocked western economies. The rest of them are veterans of the Reagan presidency, and they tend to idealise Ronnie. They found his ideological extremism inspiring, but he was hobbled by Alzheimer’s and charmed by Mikhail Gorbachev.

Their agenda did not make sufficient headway during the Clinton years, which is why they were incredibly keen to elevate Dubya Bush to the White House. They realised he was more or less like a blank slate, particularly in the sphere of foreign relations. Crucially, there was no longer a Soviet Union to worry about. They still required a trigger, and along came Osama to lend a helping hand.

Less than two years on, Afghanistan has been de-Talibanised, but remains unstable. For some strange reason, democracy and prosperity did not automatically follow the war. And now Iraq has been de-Saddamised — and thrust into chaos. Thousands of Afghans and Iraqis were killed in the process, but that’s not supposed to be much of a tragedy — they were being “liberated” from tyrannies, after all.

That is not what we were told, to start with, though. Afghanistan was attacked to destroy Al-Qaeda and capture its leadership; chasing away the Taliban was a bonus. If the primary purpose has been achieved, we are being kept in the dark about it. Likewise, the assault on Iraq was ostensibly intended to seek and destroy all of Saddam Hussein’s weapons of mass destruction that posed such a dire threat to the United States. Strangely enough, however, hardly anyone mentions those elusive weapons any more. The script has changed: the death and destruction was all in freedom’s name: to facilitate widespread looting, including the theft of priceless historical treasures. And self-flagellation in Karbala by hundreds of thousands of Shias. How ruthless it was of Saddam to deny them that pleasure. 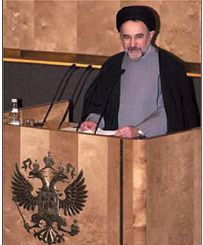 One of the chief differences between the war over Kuwait and the present aggression is, that in 1991 the Americans decided against marching into Baghdad because they had no idea what may follow the ouster of the Baathist regime; they appear to have been equally clueless in 2003, but decided to go ahead anyway.

And they did so with the connivance of other Arab governments. Although the Organisation of Islamic Conference and the Arab League both passed unanimous resolutions condemning the war shortly before it began, US forces used Kuwaiti, Qatari and Jordanian soil as a launchpad for the ground invasion, while the air war was conducted from a command centre near Riyadh. Kuwait even permitted its island of Faylakah to be used by the Israeli military for giving lessons in urban warfare to US troops.

Arab unity has, of course, never been anything more than a myth, and it was shattered comprehensively at the League session in Sharm El Sheikh when Libya’s Muammar Gaddafi and Saudi Crown Prince Abdullah exchanged unpleasantries, and again when Iraqi and Kuwaiti ministers exchanged insults at the OIC moot in Doha. Now the demand for an American withdrawal has been voiced, but the US knows better than to pay any attention.

It seems to be more concerned about Syria and Iran. Rumsfeld has given the evil eye to both these countries, amid official American denials of any plan to invade either. But, although North Korea’s Kim Jong II has been trying his level best to attract Washington’s attention away from the Middle East, it appears unlikely that US troops will be pulled out of the Gulf theatre for as long as “unfinished business” remains.

That, of course, entails guaranteeing Israel’s security. Notwithstanding its stores of nuclear, chemical and biological weapons, the Jewish state is uncomfortable with the idea of coexisting with the current regimes in Syria and Iran, and perhaps even Libya (which holds a special place in the minds of the Reagan administration alumni, who fondly recall the bombing raids mounted to cow the Colonel in the days when Rumsfeld was personally encouraging Saddam to step up his aggression against Iran).

Although Bashar Al Assad took an uncompromising stand on the Iraq question, he has, assiduously, tried to avoid any other provocation. Syria has leaned on the Lebanese Hizbollah to resist from attacks on Israel, and when the US claimed that members of Saddam’s coterie may be on the road to Damascus, it was quick to seal its border with Iraq. Assad has also been cooperating in the hunt for Al-Qaeda members.

Iran, too, has been reasonably quiescent. Notwithstanding its formal opposition to the Iraq war, Saddam’s departure has broadly been viewed with relief. However, the ayatollahs couldn’t possibly be complacent about being hemmed in from all sides by states with American bases: Turkmenistan, Afghanistan, Pakistan and now Iraq. On the other hand, US pressure benefits the most conservative elements in Iran in their tussle against the relatively liberal tendencies personified by Mohammed Khatami. 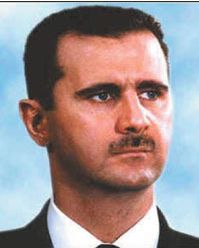 Libya remains unpredictable, but in recent years Gaddafi has done little that could be construed as provocative. Other prominent Arab countries are either already under American tutelage (Egypt, Jordan, Morocco) or more or less off the radar (Algeria). Sudan may, at a stretch, satisfy the criteria for inclusion in the Axis of Evil, but its poverty will likely suffice as a deterrent against invasion. The Gulf states customarily pay lip service to Arab nationalism, but their primary loyalty is to the US. And that leaves Saudi Arabia. There are plausible reports of US contingency plans to occupy the oilfields in the event of the Saudi status quo being threatened. Although Prince Abdullah resisted pressure to allow American bases on Saudi soil to be used in the aggression against Iraq, there can be little question that this gesture was primarily a sop to public opinion. It’s no secret, after all, that the House of Saud is closely aligned with Washington. The relationship reached its apogee during the terrorist drive against the Soviet occupation of Afghanistan, but Riyadh also proved to be an eager co-conspirator when, for example, the Reagan administration wished to send arms and money to the Contras in Nicaragua despite a congressional ban.Meanwhile, the Shia resurgence in Iraq offers them an opportunity to extend their influence. But neither faction of mullahs is interested in a military confrontation with the Great Satan.

In the eyes of the present US administration, this constitutes grounds for gratitude but not necessary long-term loyalty. Add to that, the fact that Saudi Arabia has the world’s largest proven crude reserves, and a recipe for regime change ominously begins to emerge.

There are extremely serious risks involved, of course. Bin Laden’s primary motivating factor, after all, was the American presence in his native land. Almost no Muslim would look kindly upon US guards at the gates to Makkah or Medina. Besides, the US is well aware that the most obvious alternative to existing regimes, not only in Saudi Arabia, but right across the Arab world, is elements inclined to interpret Islam even more illiberally than the devoutest of incumbents.

It’s worth remembering, though, that not all neo-fascists perceive Islamic fundamentalism as a threat. It seems much more frightening to liberal elements in the Middle East than it does to the likes of US Attorney-General John Ashcroft, who has made common cause with Iranian and Sudanese representatives at UN conferences on women’s rights, for example. Besides, the US has a long history of backing extremist organisations in the Muslim world. It is military threats and opposition to private enterprise that the US objects to, not socially repressive political arrangements.

If the Arabs truly want to be liberated, they will have to do it themselves. The best that can be hoped for in the circumstances is that Arab intellectuals will rise to the challenge of offering a path to the enlightenment that Islam so desperately requires. That is their only possible defence against long-term hegemony.

At the same time, it is conceivable (although not terribly likely), that the US will recognise the mess it has created in Iraq, and hand over the nation-building task to the United Nations. The latter does not have much of a track record in this sphere, but it may just succeed in hammering out a power-sharing arrangement a’ la Lebanon between Iraq’s Shia, Kurdish and Sunni communities, while ensuring that the profits of war do not accrue to multinationals associated with the Bush gang.

Fat chance? Perhaps. Not least because the Americans appear to be taking most of their cues from Israel. In that case, it could be years, even decades, before the Arab world is able to rise to a challenge at least as grievous as the ones it faced, not very impressively, in 1948 and 1967. In such a scenario, one will have to look to Europe and perhaps Latin America for resistance to the ugly, almost Hitlerite Project for a New American Century devised by the Bush administration’s Wolfowitzes, Khalilzads and Dick Perles.