I was not present, in Geo’s ‘War Room’, when they pulled down Saddam’s larger-than-life statue from its high pedestal in the main traffic circle in Baghdad. It was the evening of April 9 and I had left the Media City in Dubai in the afternoon, and driven straight to the airport for my Emirates flight to Karachi. I was numb with the fatigue and emotional strain of watching and breathing the Iraq war for 16 days in succession — and commenting on it in live sessions, for varying periods of time from forenoon to late into the night.

However, though I did not witness that symbolic moment of the fall of Baghdad, I had sensed the ending around noon when I hosted my last session with senior journalist, Irshad Ahmad Haqqani, and scholarly analyst, Dr Hassan Askari. We were discussing something when I noticed the CNN ticker on one of the terminals that lined the studio. There were reports of looting in some parts of Baghdad. I immediately picked it up, suggesting that it was a momentous development, foreshadowing the end. I saw it as a heartbreaking denouement of an encounter that had taken us on a rollercoaster ride, with its all traumatic highs and lows.

The story of the Iraq war (and peace), of course, is still unfolding and in some ways it demands more perceptive and careful reporting and interpretation than what we were able to provide in Geo’s ‘War Room’ during the heat and fury of the most closely watched war in history. This was not a long war but the uninterrupted intensity of its coverage seemed to have created a kind of ‘war fatigue among viewers. As the fall of Baghdad drew closer, the ‘War Room’ sessions were curtailed and normal programming was gradually resumed. But while it lasted, the ‘War Room’ experience was truly overwhelming.

Now that I venture to sum it up, some aspects stand out. Geo’s coverage was striking in its quality, range and impact. After I returned to Karachi, I felt, on the basis of comments from friends and strangers, as if everyone had been watching us. Essentially, Geo was able to reach out to the entire spectrum of the Pakistani and Urdu-speaking audience. Similarly, experts who were contacted on the phone and the opinions they expressed represented all the different emotions, illusions and expectations that the war had evoked. In that sense, the entire exercise was a lesson on how the passions of the populace and the judgments of more discerning observers get intertwined in any attempt to depict the forever elusive ‘big picture’.

Much of what we had to do was to go along with the breaking news and the live footage we received through Geo’s special arrangements with some international news channels and TV news sources. This was our strong suit, the ability to take the viewers on the spot. In fact, there were a few occasions when we were ahead, if only by a minute or so, of such channels as CNN and BBC. A lot of ‘War Room’ excitement was centred on our production staff’s active search for the most relevant footage and the most appropriate analysts to talk to.

For a number of the early sessions that I hosted, producer Shahid Shehzad and I would look for a theme to weave in with the developing news. Then we would select the right people for the ‘beepers’. This also allowed us to induct new voices that were not on the original list of our guest speakers. In one session, we spoke to poets, and ‘beepers’ with Iftikhar Arif and Fehmida Riaz became its highlights. We took up the issue of the threat to Iraq’s cultural and archaeological heritage a week before the looting of the Baghdad museum. In fact, I was prompted by Arundhati Roy’s article in The Guardian. A review of the media coverage on that day figured in many sessions. Apart from the regulars, I found it particularly gratifying to share thoughts with such individuals as Aitzaz Ahsan, Mushahid Hussain, Hina Jilani, I.A. Rehman and Farhad Zaidi. I had an excellent rapport with Dr Askari and his liberal and progressive outlook served as a useful balance with the dominant thrust of wishfully defiant — or jihadi — assertions.

Though I am tempted to name many more of my favourite interlocutors during those 16 days, particularly those who proved to be realistic in their prognosis, I will not do so. I did not keep a diary and the pace, at least emotionally, was so hectic that memories and images are now amalgamated in my mind like a movie montage. Every morning, before we went on air, we had to sift through the news on the websites of leading channels and newspapers. It became my habit to check at least the BBC, CNN, The New York Times, The Washington Post, The Guardian, and The Independent and get printouts of the material I considered important. We had to remain in the studio during breaks, as our hotel was a half-an-hour drive away from Media City, which was one reason why we sometimes looked so exhausted on air. 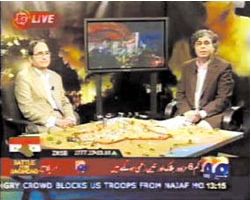 One recurring theme, naturally, was the role of the media in the Iraq war. It became a major topic early in the war when Al-Jazeera was criticised by the west for showing American prisoners and the bodies of allied soldiers killed in combat. This raised the issue of ethics and of values prevalent in different societies. We were able to exemplify the obvious blind spots of the western media, depending excessively on ‘embedded’ reporters. This arrangement allowed western journalists to accompany various units but their dispatches were admittedly vetted by military commanders. (We translated ‘embedded’ in Urdu as humsafar and humrakab and I said they could also be called humbister!).

This war was also different in the context of its credible coverage by the Arab channels and this was the first time that the domination of the western media was effectively challenged. With its bold and innovative utilisation of whatever resources were at its disposal, Geo also found itself in the same league. But I did feel that some of our analysts, as I have already suggested, were unduly enthusiastic about Iraq’s nationalistic defiance and sought to paint Saddam in the colours of a ‘mujahid’ locked in a battle with the infidels. These observers were mainly some retired generals of our army and the hopes that they raised enhanced the grief felt by our ordinary citizens when Baghdad fell without any fight. Saddam’s blustering minister of information turned out to be an additional source of stupefaction.

There should never have been any doubt about who would win the war, in the military sense. After all, the technology at America’s disposal is mind boggling. Iraq, on the other hand, had to bear the burden of its long war with Iran in the eighties, its defeat in the Gulf war of 12 years ago and the drastic sanctions after that. Add to this the ravages of Saddam’s dictatorial rule. Yet, the end did come as a dreadful surprise. We got some inkling of the people’s anger and frustration when we invited telephone calls from viewers in the final stage of the war. It was difficult to handle their anger and deep anguish.

As a professional journalist, I remained conscious of the obligation to be objective and composed. But it was not always possible in the face of the sufferings of the Iraqi people and the damage, with possible American connivance, to Iraq’s unique heritage. I kept reverting to historical references and to the glory of Baghdad in the golden age of Muslim civilisation. Another refrain was to underline the importance of the global peace movement and to wonder if the tendency among Muslims to look at the conflict in a religious context would weaken our cause.

Most of the time, we were constrained to look at the war through small windows provided by visual coverage of a television camera here and a television camera there and by numerous press briefings in which they would present their own spin on separate developments. But the real task was to portray the big picture and to make sense of the historical changes that the war in Iraq has generated. In Geo’s ‘War Room’, we did try to grasp the big picture and I must commend the spirited exertions of the entire team, particularly the role of Nasir Beg Chughtai and Kamran Khan, who were the main anchors. Director News Azhar Abbas, was himself stationed in Dubai during this time. Geo opened, for the people of Pakistan, a wide ‘War Room’ window on the war. And that view held the audiences in Pakistan captive during the entire period of the military conflict.