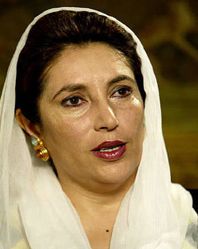 The PPP’s Central Executive Committee met in London recently, triggering speculation back home in Pakistan that this might be the moment millions of Bhutto supporters had been waiting for: Benazir Bhutto might be coming home. “I don’t know why there was speculation that Ms Bhutto might decide to go back at this point in time,” said a CEC member on condition of anonymity. “General elections in October 2002 provided us the best opportunity for her to storm the country. When she did not go at that time, how could she even think of returning to Pakistan now?”

“I do want to go back but I suspect they would tie my hands and I won’t be able to do much. In fact, the dictator might become even stronger,” Bhutto said at a PPP reception in London attended by the party leaders, workers and journalists. She termed President Musharraf a “tinpot” general and blamed him for blackmailing the west by creating threat perceptions of the Taliban, the mullahs and Osama bin Laden. Ms. Bhutto also demanded that an independent inquiry be instituted to investigate of the issue of nuclear proliferation from Pakistan.

“Benazir Bhutto is desperate and wants to grab the attention of the international community,” retorted a top Pakistani diplomat in London. “She realises that the nuclear proliferation issue is very sensitive in the west and she is trying to damage the country’s interest for the sake of her opposition to President Musharraf,” he added.

Apparently the PPP’s London meeting ended without any major decisions. It amounted to nothing more than a winter get-together for party leaders. “We discussed strategies on how to confront General Musharraf and his clique,” said a PPP insider. “But we do realise that the international situation suits him and, for the time being, Musharraf will continue to enjoy the support of the US and other western powers. Now Ms. Bhutto will go back only if she gets a green signal from General Musharraf or from the US, and if the party feels the time is right for her to land in Pakistan.”

Contrary to the claims of some of the PPP leaders that Ms Bhutto will soon be travelling to Pakistan, most analysts don’t see her returning in the near future. They expressed surprised at the fact that the erstwhile chief minister of the Punjab, Shahbaz Sharif, was in London when Ms Bhutto was chairing the party meetings but they did not speak to each other even once. 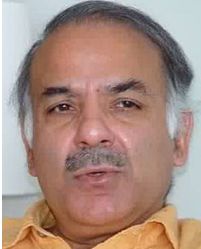 “No, we had absolutely no contact whatever,” said Shahbaz Sharif in an interview. Sitting in his modest apartment in the sprawling Park Lane area of London, Shahbaz Sharif appeared far more optimistic about returning to Pakistan than Bhutto.

Incidentally, the PPP and the PML(N) are the two main allies in the opposition’s Alliance for the Restoration of Democracy (ARD) and lately both parties seem to be flirting with each other, even going to the extent of accepting that they had committed mistakes in the past. But while Benazir Bhutto is extremely vocal in her criticism of General Musharraf, Shahbaz Sharif is playing it cool. “Shahbaz Sharif is using very moderate language against Musharraf unlike his brother, Mian Nawaz Sharif, who demands immediate action against the general,” said an analyst, “so there exists the possibility, as is being speculated in the Pakistani media, that Shahbaz Sharif is in contact with the army and trying to repair the damage his brother caused by confronting the army.”

Analysts maintain that the distance between Shahbaz Sharif and Benazir Bhutto is understandable, since the two are running on different tracks. And this was the conclusion drawn by a PML(N) leader from Sindh too, who believes that his party’s strength for the moment, lies in cooperating with the army and the establishment.

Shahbaz Sharif has filed a petition in the Lahore High Court’s Rawalpindi bench requesting the court to direct the government to allow him to return to Pakistan. He is anxiously awaiting the verdict and expresses confidence that the court will rule in his favour.

If that were to happen, and Shahbaz Sharif did decide to return to Pakistan, it would be interesting to see how this would affect the so-called deal between Pakistan and Saudi Arabia, according to which it is reported the Sharif family members cannot come to Pakistan for 10 years. Shahbaz Sharif, however, denies that any such deal exists.

To an experienced analyst, it’s very obvious that the two leaders are gauging the situation from two entirely different perspectives, but both of them would most probably agree with a high-ranking western diplomat who said: “We believe in democracy and we will not let the generals rule Pakistan indefinitely, but for now we cannot disturb the fragile balance of the allies who are united on one point that the first and most important fight of the time is against terrorism. Democracy can wait and so can political leaders.”