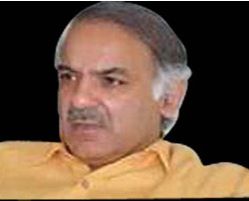 Q: You have filed a petition in the Supreme Court of Pakistan to be granted permission to return to Pakistan. What’s stopping you from going back?

A: The government has said that if I go to Pakistan, I will be sent back here. You saw what happened when my daughters and wife went to Pakistan. They have nothing to do with politics, but still they were harassed and forced out of the country. So you can imagine what they would do to me if I went back. The law of the jungle is prevailing in the country. But I am not frightened of jail — I want to go back and defend the cases against myself.

Q: If you were not afraid of jail why did you leave the country in the first place?

Q: Does that mean that if the Supreme Court does not order the government to allow you into the country you won’t return?

A: I have complete trust in the court and judges. I can’t even conceive that the court would not allow me to return to my country. I am sure I will be going back very soon.

A: Well, quite soon. I am going through health checks and consulting doctors because I want to go to Pakistan in perfect health.

Q: How much validity is there in the speculation that you and PPP leader Benazir Bhutto will return to Pakistan together?

A: Mohtarma Benazir Bhutto is a citizen of Pakistan and a former Prime Minister. She will return to her country, so will Nawaz Sharif and myself. But so far there is no plan of Ms. Bhutto and myself returning together.

Q: Have you been in touch with Ms. Bhutto recently?

Q: What is your response to rumours that you have struck a secret deal with General Musharraf’s administration?

A: That is absolutely untrue. I have not struck any deal with the government. If I have to strike a deal I would rather do it with the people of Pakistan.

Q: Do you have any contact with General Musharraf’s aides?

A: No, there is no official contact, but one meets different people and possibly some of them could be Musharraf’s aides. I have indirect contact.

Q: In an interview in October 2002, Nawaz Sharif said that General Musharraf should be tried for his crimes. Do you endorse that suggestion?

A: I do not believe in political vendetta. The Pakistan army is an important institution, but army governments are against the interests of the country. We want to be engaged with the army and do not want confrontation with it, but the army has to be kept away from politics. Pakistan is a poor country and we have to do a lot of work to lead the country into the modern age. I genuinely believe that without democracy, the country cannot prosper.

Q: What kind of democracy are you talking about? Can you honestly say when Mian Nawaz Sharif was at the helm, Pakistan had true democracy?

A: I admit that our democracy was not good enough, but Martial Law is not the cure for a not-so-good democracy. No political government has been allowed to complete its term. Agencies have been used to destabilise successive governments and abet conspiracies.

Q: Yet you were the people who conspired against Benazir Bhutto’s government, weren’t you?

A: I confess that we were involved in [making it difficult for her]. We were used by the agencies and became tools of their conspiracies. They didn’t allow democracy to flourish. Politicians are accountable and so should everybody else be. Why are generals not accountable to anyone? Their policies made us lose half the country, resulted in two wars and then there was the Kargil episode. Why have they not been held accountable?

We started the peace process with India five years ago with the Lahore declaration, but they said we betrayed the Kashmir cause. Now after five years they are doing the same thing. So is this loyalty or betrayal? I would say the country has suffered the most under army rule.