The Muttahida Majlis-i-Amal (MMA) emerged as the third biggest electoral force in the country in the October 10 elections after the PML-Q and PPP. In fact, its performance was better than the PPP’s because it won an outright victory in the NWFP and will be able to rule that province on the strength of its own majority. By comparison, the PPP will still need the support of one more party to form a coalition government in its Sindh stronghold. The PML-Q also won enough seats to form a government by itself in at least one province, the Punjab.

However, the MMA’s share of votes of about 11 per cent was far less than the PPP’s 25 and PML-Q’s 24 per cent. The MMA and PML-N won an almost equal percentage of votes countrywide, but the former bagged more seats under Pakistan’s first-past-the-post system of elections. It was even said that the MMA gained at the expense of the PML-N in many constituencies, thereby reversing the trend in earlier elections when the religious vote used to fall in the lap of the Muslim League and other centrist parties due to the belief of voters that their vote would go waste if they voted for weak candidates put up by the Islamic groups.

There were quite a few factors that contributed to the best electorate performance to date by the religio-political parties. The most important was their unity that led to the formation of an alliance much before the polls and gave them a jump-start over other parties. The coming together of six parties that had squabbled bitterly in the past was welcomed by religiously-inclined Pakistanis, and their decision to contest the polls under a single election symbol and manifesto turned their alliance into an effective vote-getter. In fact, the MMA central leaders were the only ones among the major contestants in the elections to speak at public gatherings all over the country in a group and run an issue-based campaign. The book as an election symbol was also helpful, more so in areas with a large concentration of illiterate voters, but it ought to be remembered that the Jamiat Ulema-i-Islam (JUI) has been contesting elections on the same symbol since 1970 and failing to improve upon its poor performance in successive polls.

The splits in the PPP and PML and the absence of their crowd-pullers, Benazir Bhutto and Nawaz Sharif, also helped the MMA. The disenchantment of voters with the mainstream political parties on account of their dismal performances while in power also prompted sections of the electorate to try the MMA candidates, who in most cases were newcomers and enjoyed clean reputations. But a dominant factor that catapulted the MMA into a commanding electoral position was its bold anti-US stance in the context of the situation in Pakistan, Afghanistan and elsewhere in the Islamic world. Its leaders had expressed solidarity with Osama bin Laden and Taliban leader Mulla Mohammad Omar when nobody was willing to defend them after being targeted by the US in its war on terrorism. Most Pakistani Pakhtuns, deeply hurt by the suffering of their Afghan brethren as a result of the US-led military operations in neighbouring Afghanistan, wanted to reward the religious parties for standing up to America and punish the Pakhtun nationalists for siding with the US.

The outcome of the polls, particularly in the NWFP and Balochistan, shocked all concerned. The MMA also proved its countrywide support by winning assembly seats in all four provinces. Its component parties made a comeback in urban Sindh by winning seats in Karachi and Hyderabad at the expense of the MQM. The victory of MMA contestants in Islamabad, Lahore and Gujranwala was an indication of its appeal in parts of urban Punjab. 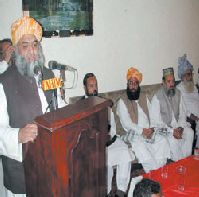 The MMA didn’t expect to record such a resounding electoral success in the NWFP either, a fact conceded by its most powerful leader, Maulana Fazlur Rahman. Had the alliance been hopeful of victory on such a scale it would have directed one of its top leaders to contest election for the NWFP Assembly so that he could be put up as a candidate for the office of the chief minister. A lack of candidates with stature has thus forced the MMA to nominate Akram Khan Durrani, for this slot since is the most experienced among its 48 MPAs after remaining an MPA for two terms and serving briefly as a provincial minister. Incidentally, his nomination by the JUI-F as the MMA parliamentary leader also sparked the first rift in the alliance due to objections by the Jamaat-i-Islami. The Jamaat-e-Islami was not only unhappy over the manner of his nomination without seeking endorsement of his candidature by the MMA central leadership, but was also concerned that Durrani was beardless. The differences were subsequently resolved but it left a bad taste in the mouth and will undoubtedly continue to haunt the MMA in future. One won’t be surprised if similar situations arise in the coming weeks and months in view of the fact that their prostestations notwithstanding, the six religious parties have not yet fully resolved the political, scholastic and sectarian disputes that kept them apart for decades and embittered their relations.

To prove his Islamic credentials, the 42-year-old Durrani proceeded to Raiwind to attend the annual Tablighi congregation and stopped shaving to grow a beard. His beard will surely be of an acceptable size by the time he is required to take oath as chief minister. If this materialises, Durrani would be the second JUI chief minister after Mufti Mahmud, Maulana Fazlur Rahman’s late father who served in that office as a joint JUI-NAP nominee in the early 1970s.

All the MNAs and MPAs elected on the MMA ticket belong to the middle, lower-middle and poor classes. They defeated moneyed candidates belonging to known political families. Most MMA nominees ran their election campaigns on donations, and it was common to see voters coming in vehicles provided by the rich candidates but voting for the religious alliance.

Among their victims were the Bilours and Arbabs of Peshawar, the Saifullahs of Lakki Marwat, the Hotis (sons of Azam Hoti and Khwaja Mohammad Khan Hoti) of Mardan, the scions of the Wali of Swat’s family, the Miankhels of Dera Ismail Khan, the Kundis of Tank, the Tarands of Battagram, the Khan of Elai, and the Walis (Asfandyar Wali and Sangeen Wali) of Charsadda. Former federal ministers Iftikhar Gillani and Abbas Sarfaraz Khan were also vanquished and so was ex-speaker of the NWFP Assembly, Syed Masood Kausar.

Those who voted for the MMA candidates in droves are now expecting them to highlight issues concerning the commoners, enforce Shariah, punish the corrupt and help formulate an independent foreign policy that preserves Pakistan’s self-respect and isn’t always subservient to the US. It is a tall order and the MMA leaders would be risking a lot if they decide to become part of a ruling coalition at the centre. Their supporters would realise the MMA’s limitations if their rule was confined to the NWFP and Balochistan, and they may become less demanding if it decided against accepting cabinet jobs in the federal government. In any case, the MMA is already attracting flak for demanding the Prime Minister’s office and refusing to accept the right of the PML-Q, the biggest party in terms of seats in the National Assembly, to elect its nominee as the premier.

However, MMA leaders have been arguing that they won’t be able to implement their policies if they do not become part of a coalition at the centre. With that goal in mind, the MMA was the first among the three major electoral groups to name its candidates for the offices of the Prime Minister and National Assembly speaker. Maulana Fazlur Rahman and Liaquat Baloch would become the premier and speaker, respectively, if the MMA had its way. That would be like showing a red rag to the US and the west, and it is certain that President General Pervez Musharraf will use his considerable leverage to derail any such move. He would be able to coexist with a PML-Q man as premier and would be happier still if the PPP and PML-Q were to form a coalition. The President, who appears determined to wear his army uniform as long as it takes, would also resist moves by the MMA to bring changes in the foreign policy. Any attempt to stop Pakistan’s support to the US war on terrorism, create problems for the Hamid Karzai government in Afghanistan, offer sanctuaries to al-Qaeda and Taliban fighters in Pakistan, or support the banned jihadi groups fighting in Indian Kashmir would be disallowed by General Musharraf.

In such a scenario, the MMA would be forced to take some cosmetic measures to implement its manifesto and try to satisfy its voters. Already, the MMA leaders are saying that they would declare Friday as the weekly holiday in place of Sunday, do away with co-education, put a halt to obscenity in the print and electronic media, and reform interest-based banking. The implementation of some of the above mentioned measures would inevitably trigger protests and alarm the civil and military establishment.

In the final analysis, the MMA would either have to make compromises that would damage its reputation or quit the government to avoid losing the support of its restless supporters. The MMA has been pushed into a very difficult situation in the wake of the October 10 elections. Its failure in power would damage the cause of the Islamic parties and make it harder for them to record a similar victory in future polls.