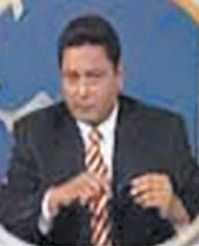 October 10; 10:00 p.m — and still no sign of the election results. PTV continued to show reruns of an old comedy play, Guest House, with Mustansar Hussain Tarrar and Mehtab Rashdi waiting patiently in the wings — all the more time for last minute make-up adjustments and orders from the PTV management. Indus News chugged along with their Election special, Election Train, with ‘Mr Tezgaam’ himself, Mujahid Barelvi, a man known to talk a mile-a-minute. Geo, meanwhile, tried to keep their audience share awake by bringing Jang columnists to the fore. In addition to Kamran Khan and Hassan Nisar, Ahmed Haqqani and Rahimullah Yusufzai gave their election predictions. ARY, the star of the night, telecast two programmes simultaneously: one from the UK with Dr Shahid Masood Siddiqui and the other hosted by the hugely popular, PJ Mir.

Benazir Bhutto, fondly referred to by ARY as “Mohtarma,” unveiled all her petty feelings and reservations about President Musharraf just a day prior to the elections. The audience witnessed Ms Bhutto’s rash remarks, which would otherwise have been censored, “Mush to Bush ki gode mein charh kar baith gaye hain,” and “Un ka to record hee toot gaya hai…chaye woh jahan bhi jayen, Washington ya Agra, un ka to record Benazir, Nawaz Sharif, Benazir, Nawaz Sharif hi bajta rehta hai !” And she did not stop there. She droned on endlessly in her nasal tone about how Pakistan was involved in the strikes on the Indian Parliament — setting off a flurry of anti-BB letters in the Pakistani press. And some interesting calls to ARY in the days that followed, including some from PPP loyalists, who were disgusted with their leader’s remarks.

President Musharraf, too, was interviewed by PJ Mir, live from Islamabad. Musharraf probably lives by Margaret Thatcher’s wise words, “I am extraordinarily patient, provided I get my own way in the end!” And that is exactly how the President held his ground. His signature laid-back charm did not falter, even when PJ gave it his best shot!

That the October 2002 elections were intensively covered would be an understatement. Channels — private or national — left no vote uncounted, no party history unturned and no topic uncovered. But it is probably what was telecast on the night of October 10, 11 and 12, that really mattered. As the whole nation waited in anticipation for the results of what would supposedly bring about a revolutionary change in Pakistani politics, the Pakistani media tried to take us as close to the truth as they possibly could. Covering the Pakistani elections internationally were BBC and CNN, whose crews flew in to cover the polls. And our private Pakistani channels weren’t faring badly either. Gone are days of Tim Sebastian and Christiane Amanpour. Our own hard-hitting talk-show hosts and comperes, Mujahid Barelvi, PJ Mir, Dr Shahid Masood Siddiqui, Kamran Khan, Abdur Rauf and Nida Fatima, to name a few, gave as good as they got.

With five channels – ARY, Indus News, PTV, PTV World and Geo – providing intensive election coverage, 10 minutes on any channel was enough to determine which one was worth watching. Unfortunately most did not even come close to accurate news or views. Indus News was, by far, the worst that night as well as the nights that followed. With only two political experts, Mujahid Barelvi and Amir Zia, holding the fort, with a few beauties without brains next to them, presumably to provide some aesthetic relief, Indus lacked the wit and analytical expertise offered by the other channels. The Indus election coverage comprised in-house discussions between the four comperes coupled with tedious and often unintelligible phone calls with party leaders and analysts. Though Amir had the phone on his table and was responsible for calling prominent personalities, he hardly got a chance to ask his own questions because Mujahid had a list of his own. The scene was actually quite comical as Mujahid would shout out his question from one end of the room, and Amir would repeat the same question again into the phone as the caller on the other end could not hear Mujahid as loud and clear, as the viewers could. Seemed to be Mujahid Online revisted, except this one lasted 24 hours! The women on Indus too, desperately need to brush up on basic politics. Aliya Iqbal, Mariam Mukati and Naushaba Brohi to name a few, were called in to read out results as well only to end up falling flat on their made-up faces! The funniest was when Mariam and Naushaba were discussing the polling turnout in the Punjab. “Surprisingly, the election has brought about quite a low voting turnout…” maintained Mariam who was then saved by Amir who said, ” I beg to differ, Mariam. We’ve witnessed an average of 45 to 50 per cent turnout in the Punjab, which is quite good…” A good thing that Amir was there as the proverbial knight in shining armour to rescue the damsel in political distress! There were also instances when an Indus crew member would come in to hand a piece of paper to the female hosts. To the audiences’ surprise it wasn’t the latest result, but tips on what questions to ask; anything to make them seem slightly more politically aware. 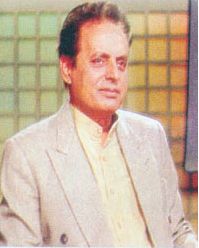 A pleasant surprise was PTV’s frank and open pre-election programme, Election Hour, a 60-minute dose of parties presenting their own manifestoes and ideas. And it had its highs…and lows. We saw Nawabzada Nasrullah in vintage form — age hasn’t destroyed his wit — criticising the Musharraf government. Maulana Shah Ahmed Noorani meanwhile vented his brand of Islam, and talked of how women must be kept behind seven veils and that “30 lakh bastards are born in the UK every year, due to co-education.” Enough to turn the stomach of any sane and liberal viewer. With the dearth of interviewees, the same faces appeared ad nauseam on every channel. The most recurring guest award definitely goes to Imran Khan, as he made it a point to show his ‘pretty’ face on every channel at least twice a week. Programmes on PTV World and PTV were backed by excellent presenters, Talat Hussain, Quatrina Hussain and Farhad Zaidi who kept politicians squirming in the hot seat.

ARY, meanwhile, had its own game plan. Given their pre-election coverage, their on-the-spot election coverage was being predicted to be the best. And it did not disappoint. Running two shows simultaneously — one from the UK and the other from Karachi — ARY continued with upfront interviews, in depth analysis and accurate predictions with two of their best hosts, PJ Mir and Dr Shahid Masood Siddiqui. There was a tele conference link between the two studios, which allowed the guests and hosts to cross-question each other making for some very interesting and lively debates.

Dr Masood had Lord Nazir plus former senator, Shafqat Mehmood, PML (Q)’s Azeem Khan, and a Pakistani journalist, flown in especially for his show, while Mir, on the other hand, supplied ARY audiences with a varied panel. A PPP nominee for reserved seats, Sherry Rehman, defended Benazir Bhutto throughout the half-hour she remained on the show, despite irate callers questioning Ms. Bhutto’s brash comments the previous night.

CNN reporter, Peter Arnett, and AFP’s Mazhar Abbas gave in depth analysis on the election strategy, but by midnight people had overdosed on the subject and were ready to doze off. Fortunately, Ardeshir Cowasjee and Ikram Sehgal awoke viewers from their slumber. Ardeshir was, as always, his self-righteous, curt and outrageous self. When asked by Dr Shahid in London, what he would do if he was appointed Prime Minister, Ardeshir roared: “I won’t accept such a position. Yeh sala 160 million Jat logon par hakoomat karne ka humain koi shauq nahin hai.” Ikram Sehgal, however, came to Cowasjee’s rescue. “He has an edge of 20 years of bitterness over me. In another 20 years, I might be talking in the same manner,” said Sehgal. In any case, both columnists were politically correct in their statements, not to mention entertaining as well! A little after two a.m. with the Muttahida Majlis-e-Amal (MMA) in the lead, a slightly sleepy Dr Shahid was suddenly wide awake and genuinely surprised by the results. He had his audience in fits when he asked PML (Q)’s Azeem Khan, “Yeh cycle ka paihya puncture to nahin ho gaya…”

GEO promised “faster firsts” and delivered as promised, but got off to a slow start with a major miscalculation. They put on Noman Ejaz, Savera Nadeem and Fakhr-e-Alam making their coverage frivolous and out of sync with the need of the hour. Realising the folly of airing glitz when all people wanted was politics, GEO recovered instantly and hit back with a panel of political analysts and observers who enlightened the viewers and kept them hooked through the days and nights till the final results were announced. GEO even tried playing funny with a frame-by-frame replica of BBC’s Simpson’s World. Well, let’s just say our local Mr Simpson looked very awkward, trying in vain to snatch back his mike from the over-enthusiastic hordes who were desperate to see their own mug shots on television.

Also in the running was KTN, a Sindhi channel which was launched by the Sindhi daily, Kaawish, just 10 days prior to the general elections. With limited resources, they managed to do marginally well.

The main objective of the independent channels was to inform the public of the results — first. But the cut-throat competition between the channels in the race to be first, created more confusion for the viewers. The boo-boo list is endless. For example, GEO announced Gohar Ayub’s son as losing to Sabir Ali Shah by a margin of 2000 plus votes, when in reality, he actually won by a similar margin. Likewise, Nasreen Jalil was almost announced the winner by GEO, until the final countdown revealed that actually MMA candidate, Afghani, had won.

Despite the bleeps, fouls and blunders by all channels, election coverage has never been so exhaustive, or so exhausting.