While General Pervez Musharraf’s constitutional amendments were widely criticised, the undergraduate clause had an unintentional side effect — the empowerment of Pakistani women. With the nation’s political parties hitherto showing a chauvinistic reluctance in awarding tickets to its women workers, 11 political parties in this year’s elections, including PPPP and PML-Q, promoted a large number of women candidates on general seats.

Out of the 60 women who filed nomination papers for the 242 general seats of the National Assembly, 13 were declared successful — the largest number of women to have won in an open contest. However, there is a darker side to this ostensible empowerment: the majority of women candidates are backed by their male family members who would have contested, had they not been disqualified, predominantly because they had either been convicted by a court of law or failed to meet the graduate condition. For example, Dr Azra Pechuho contested in place of her brother Asif Ali Zardari, who has been convicted of corruption, while Hina Rabbani Khar was introduced to politics by her father, Ghulam Noor Rabbani Khar, who could not contest due to the graduation condition.

Some popular women politicians, who failed to return to the assemblies include former minister, Begum Abida Hussain, Nasreen Jalil and Nilofer Bakhtiar. So while the majority of women in parliament this time are political novices, it is interesting that most of them attribute their success to a man. Newsline speaks to some of these women to ask if their policies will differ significantly from those of their predecessors and those of their family members?

One of the youngest entrants into Punjab’s political scene, Hina Rabbani Khar of the PML-Q, successfully paved her way to the National Assembly in the October elections defeating her cousins, Shahnawaz Khar and Malik Basit Khar, from the NA-117 Muzaffargarh seat. After completing a BSc in Economics from LUMS, Hina went on to read for an MSc in Hotel, Restaurant and Travel Administration, from the University of Massachusetts. The daughter of a seasoned politician, Ghulam Noor Rabbani Khar, a parliamentarian since 1985, who was disqualified from contesting the 2002 elections due to the graduation condition, Hina bagged an impressive 46,760 votes in the October elections, and credits her success to her father’s reputation. 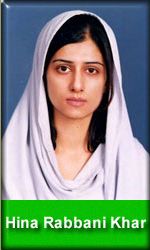 Why do you think people voted for you and not the other candidates?

My father, Ghulam Noor Rabbani Khar has, Mashallah, secured a seat from this constituency from 1985 onwards. He has a very clean reputation in the area, and is known for his developmental work and empathy towards the poor. When he was disqualified, the people were ready to vote for anyone he put up as his candidate — even if they had never seen or heard of her before.

Muzaffargarh is a very backward area — I wish I could explain the level of backwardness to the people living in the cities. We are speaking of areas inaccessible by roads, villages without electricity, without basic health facilities for miles. We are speaking of a whole generation of children who are illiterate because there is no school in the vicinity. Often the nearest school is five miles away and because of the lack of roads and transport facilities, schooling becomes impossible. There is also a lack of basic infrastructure which aggravates the already low level of health and educational facilities.

We want to rectify these problems so that future generations don’t face similar problems. We have no time to waste and need to organise developmental projects on an unprecedented scale.

We wish to be able to deliver more than we have promised — much more. Interestingly, my father did not have to promise much — his past performance was enough. But as a team, my father, my brother Malik Abdul Khaliq Khar and I have the opportunity to really deliver the developmental work needed. When the infrastructure is developed, we can start working on developing the local economy to generate jobs.

What role do you visualise for yourself in the future setup?

I think any comment on this would be premature, because there are no clear indications of what the future central setup will be.

What will you do for women’s rights?

Will your policies be any different from your predecessors?

I don’t think the question is relevant. I will proudly follow my father’s footsteps and work under his guidance. He is known for the roads that he has managed to build in the area and for the villages that he provided with electricity. Inshallah, this time we plan to accelerate the pace, and give a lot of attention to education and health facilities in the area.

Dr. Fehmida Mirza, wife of one of Asif Ali Zardari’s closest friends, Dr. Zulfikar Ali Mirza, and sister of former MNA and secretary general APNS, Qazi Asad Abid, is no novice in the game of politics. She won a National Assembly seat in the ’97 elections from NA-225, Badin II, previously her husband’s constituency. This time around she contested from the same seat on a PPPP ticket, bagging an impressive 71,534 votes. Some of the candidates contesting against Dr. Fehmida withdrew their nomination papers before the elections while Khan Mohammad Hale Pota of PML-Q and Master Abdullah Sheedi, an independent candidate, lost by a huge margin of 38,500 votes.

What was the secret behind your success in this year’s election?

When my husband was elected to serve the same constituency in the ’93 elections, he contributed a lot towards the development of Badin. When I was elected in the ’97 polls, I was in the opposition, and despite political victimisation managed to address Badin’s problems in parliament. Whenever PPP candidates are elected they never fail to serve their people. That is why our vote bank always remains strong.

I will work towards achieving true democracy and strengthening institutions like the parliament.

What role do you visualise for yourself in the future political setup?

Nothing is clear at the moment. But whether we sit in the opposition or form the government, I will try to do justice to any responsibility that is thrust upon my party.

Is there any one particular issue that you feel needs to addressed immediately?

I feel the issue of unemployment should be dealt with immediately.

What will you do to secure women’s rights?

I will ensure that no discriminatory laws against women are implemented in the future. Making people aware of women’s rights and empowering women economically are priorities on my agenda. I am not sure whether I will be able to achieve what I want, but I have a desire to bring about change, which is something I cannot say about some of our former politicians.

Due to the imprisonment of Hakim Ali Zardari and Asif Ali Zardari, the political baton was passed onto the female members of the Zardari family. Faryal Talpur, Asif’s sister, contested the 1997 elections and is currently the nazim of Nawabshah. This year, Asif Ali Zardari’s second sister, Dr. Azra Pechuho contested from NA-123, Nawabshah-1, which was previously Asif’s constituency, against Syed Zahid Hussain Shah of PML-Q, Ghulam Haider Raho of MQM and Sardar Dar Ahmed. She bagged 75,237 votes and won by a huge margin of 46,413 votes. Dr. Azra’s husband, Fazlullah Pechuho is a former Deputy Commissoner of Thatta who after being charged on many corruption counts is now in self-exile in Dubai. Azra is a doctor by profession who practised medicine for seven years, before retiring to become a full-time mother.

Why do you think people voted for you and not the other candidates?

People voted for me because I was a PPPP candidate. Also because they are sympathetic towards Benazir Bhutto and Asif Ali Zardari as they feel very strongly that both of them have been vilified unnecessarily. I, being Asif’s sister, got their sympathy vote.

During the 1994 tenure of the PPP, Asif did a great deal of developmental work in his constituency, after which not an iota of work was done by the PML-N candidate who became the MNA from this constituency in 1997. Therefore, people had many complaints against both the Shah family and the MQM. I also got some Mohajir votes this time, as the PPP did a great deal of developmental work during its last tenure i.e. building schools and colleges (Quaid-e-Awam Technical College), upgrading Nawabshah Civil Hospital, constructing an overhead bridge in Nawabshah and providing extensive network of roads and piped Sui gas to all the small towns near Nawabshah. Nawabshah Industrial Estate was also in the pipeline and the budget was also sanctioned but it was scrapped during Nawaz Sharif’s tenure in 1997.

Family reasons inducted me into politics, but once I started campaigning and became exposed to the problems of the people, especially in the rural areas, I was extremely moved by the grinding poverty and the warmth and love of the people. I hope by entering the hallowed halls of the National Assembly, I will be able to translate some of their hopes and aspirations into action. There is terrible poverty and unemployment in Nawabshah which is directly associated with a shortage of irrigation water and the fact that the youth of our country are failing to get employment because of the lack of investment in industry and other sectors. I hope with a sound political setup, investor confidence will return and there will be a trickle down effect in my constituency as well. I also hope to find solutions to illiteracy especially in primary education and to deal with women’s empowerment. I may be naive to think I can achieve these targets, but first come the dreamers, then come the doers.

What role do you visualise for yourself in the future setup?

I visualise myself as a female who will, at the very least, bring visibility to women’s issues, and who will be a voice of sanity in a male dominated setup.

Is there any one particular issue that you feel needs to be addressed urgently?

The water problem in Sindh, which has exacerbated the level of poverty and hunger in the area. The people of Nawabshah have been acutely affected by this situation, especially farmers on small holdings whose subsistence depends on their crops and the few cattle they own.

What will you do for women’s rights?

Female education and economic empowerment are the few steps I hope to achieve.

Will your policies be any different from your predecessors?

I think the feminine role of nurturing and our inner empathy for the weak can bring about a change in the politics of rural Sindh.