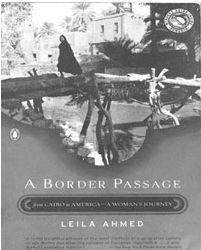 Leila Ahmad, the first professor of Women’s Studies and Religion at Harvard Divinity School, and currently a professor of women’s studies at the University of Massachusetts at Amherst, opens her lyrical autobiography with a soul-baring paragraph: “In the poetry of Jalaluddin Rumi, the classic master-poet of Sufism, the song of the reed is the metaphor for our human condition, haunted as we so often are by a vague sense of longing and of nostalgia, but nostalgia for we know not quite what. Cut from its bed and fashioned into a pipe, the reed forever laments the living earth that it once knew, crying out, whenever life is breathed into it, its ache and its yearning and loss. We too live our lives haunted by loss, we too, says Rumi, remember a condition of completeness that we once knew but have forgotten that we ever knew. The song of the reed and the music that haunts our lives is the music of loss, of loss and of remembrance. That’s how it was in the beginning, how it was to come to consciousness in this place and this time and in a world alive, as it seemed, with the music of being.”

A Border Passage is a simple and beautifully written account of the anxieties of a generation whose formative years were informed by the political and economic imprint of the years surrounding pre- and post-revolution Egypt — a generation which has suffered from an acute identity crisis in a world in which impassioned nationalism has flourished. Ahmad grew up in Cairo in the 1940s and ’50s. As a young woman she was witness to some of the major transformations of this century — the end of British colonialism, the creation of Israel, the rise of Arab nationalism and the breakdown of Egypt’s once multi-religious society. Her reflections of those bygone days betray a joyful nostalgia: ” My schoolmates at the English School in Cairo included Syrians, Lebanese, and Palestinians from the same broad class background as mine, and their attitudes toward English, like mine, no doubt reflected the attitudes of our parents [ admiration for European civilization but hatred for their imperialistic ways]. One of my two best friends through my school years was Jean Said, who would later write ‘Beirut Fragments’; she was the younger sister of Edward Said, the well-known theorist and literary critic. They were Christians of Palestine and we were Muslims of Egypt…”.

Ahmad’s biography combines personal and poignant reflections with the broader issues of language, race and nationality, with special emphasis on the lives of Muslim women. Ahmad’s crisis of identity in the new Egypt deepened as a result of her engineer father’s bold opposition to Nasser’s pet project, the Aswan High Dam. When the revolution happened, her family’s passionate opposition to Nasser’s policies led to their persecution and set the young Leila on a journey across cultures. By enrolling at a university in England and teaching in Abu Dhabi and America, Ahmed sought not only to define herself but also to understand how the world perceived her — a Muslim-Egyptian Arab. Ahmed is profoundly affected by the great divide between the sexes and uses extrapolated memories of her extended family and friends to introduce striking insights into the radically different ways Muslim men and women interpret their faith. She reflects,” It is easy to see now that our lives in the Alexandria house, and even at Zatoun, were lived in women’s time, women’s space. And even women’s culture.” The book also tells of her own suffering from racial, religious and gender discrimination at the hands of American feminists who don’t take her seriously because of her Muslim heritage.

With what can almost be described as poetic text, A Border Passage narrates what a peregrination through multiple geographic identities and cultural heartlands into the western world entails. Ahmed combines her powers of analysis and description with an uncanny retrospection in an attempt to understand the issues and emotions this journey brought about. She reflects, “The passion and joy of thought and understanding would come back into my life only after I had gone back to Abu Dhabi to work and begun to feel driven by my need to understand, as the Iranian revolution crested, our history as Muslim women and what possibilities lay ahead; simultaneously I began to read the exhilarating feminist books coming out of America. Placing Muslim women at the heart of my own work was in a way, and among other things, ( as I see it now) a refusal of our invisibility.”

Having said that, A Border Passage is much more than just an autobiography. Ahmad masterfully analyses multifarious critical social and religious issues and incorporates them skillfully into her main story. Known for her landmark book, Women and Gender in Islam, an iconoclastic history of ideas about Muslim women, she courageously debunks every stereotype a western reader may have about women in the Islamic heartland. This autobiography, however, is a must-read, not only to understand the life and times of Muslim women, but for its literary and lyrical qualities as well.