General Musharraf may lack the shrewdness of General Zia-ul-Haq but he appears to have outdone the late military dictator in the art of political manipulation. After micro-managing the elections, his lieutenants are now busy engineering a “dependable” government that the president can live with. General Musharraf claims he has no role in the formation of the new administration, but his top aides have been working overtime, secretly meeting leaders of the main political parties and newly elected legislators, trying to manoeuvre a loyal coalition.

Independent members have already been lined up and there is a move to strike down the anti floor-crossing law to facilitate the pro-military Pakistan Muslim League(Q) in mustering a majority vote with the help of potential PML (N) and PPP defectors. The hunt for a ‘suitable’ prime minister also seems to have narrowed down with Mir Zafarullah Jamali, an inconsequential Baloch leader, emerging as the favourite. The stage is all set for the dawn of a new era of “guided democracy.” But can such a system work?

For the third time, the country is witnessing an experiment in civilian rule under an all powerful military president. Previous attempts by Field Marshal Ayub Khan and General Zia-ul-Haq to “civilianise” their rule crashed within three years of their inception.

Many political observers predict a much shorter life for the present dispensation. General Musharraf has tried to secure his survival through virtually changing the constitution, making himself all powerful. But even that may not be enough to control the new political dynamics unleashed by the unpredictable election results that have shaken the military establishment.

President Musharraf had promised to transfer power to a civilian administration by November 1. This deadline had to be extended three weeks after the polls that produced a hung parliament. Political observers believe the delay was a ploy to ensure a pliable administration.

It is quite apparent that, despite the military’s best efforts, the election results reflected a no-confidence vote against President Musharraf’s government. More than 60 per cent of the votes went to parties opposed to the military regime. The pro-military PML faction could get only 24 per cent of the vote, despite all the pre-election support. Most observers agree the situation would have been worse for the general, had the elections been conducted in a free and fair atmosphere.

European Union observers have called the elections “flawed” and expressed strong reservations about the country returning to democracy with the present concentration of power in the president’s hands and a military-dominated National Security Council. In a scathing criticism of the election process, their report said that the secrecy of vote was compromised and counting showed serious shortcomings. They said the election commission of Pakistan failed to curb the abuse of state resources, particularly in favour of pro-military political parties. 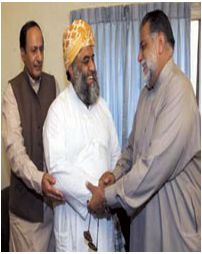 The polls have created a horizontal polarisation, with the four provinces going in different directions. While the NWFP went to the MMA, the Punjab is controlled by the PML (Q). There has not been much change in Sindh, where the PPP maintains its stranglehold in the rural areas. The MQM continues to dominate Karachi and Hyderabad, with some exceptions, where the MMA succeeded in making some inroads. The MMA has also expanded its support base in Balochistan.

The election results came as rude shock to President Musharraf, who was assured by his intelligence agencies that the polls would produce a favourable outcome, a pliable parliament of “new faces.” According to some senior government sources, the president was upset with the unprecedented success of the religious parties. The agencies, which had propped up the six-party Muttahida Majlis-e- Amal in an attempt to counter the PPP and PML (N), misjudged rising support for the Islamists in NWFP and Balochistan, the two key provinces bordering Afghanistan. A couple of weeks before the polls, President Musharraf reportedly assured a senior American official that the religious parties would not get more than five per cent of the vote.

The government’s calculations went awry as the MMA leaders started campaigning long before other parties entered the field. They fully exploited the growing anti-American feelings among the Pashtuns who were incensed by the US attack on Afghanistan. The Islamic alliance mobilised support not on the Islamic, but purely on anti-American and anti-Musharraf slogans. MMA candidates charged that the United States was dictating Pakistan’s foreign and domestic security policy, calling Musharraf an American “stooge” and demanding the closure of American bases.

“It is a war between Islam and the American infidels,” declared Maulana Samiul Haq. The slogan hit the right chord with the Pashtuns, who believed that their ethnic brethren on the other side of the border were being victimised by the US forces and the US-supported administration in Kabul. “The alliance was the only group which campaigned on issues, while others confined themselves to constituency level politics,” said a PML leader.

The unity among the hitherto squabbling religious parties also helped the alliance tremendously. “The coming together of the religious parties was the main factor in the MMA’s success,” said Qazi Hussain Ahmed, chief of the Jamaat-e-Islami. It also took full advantage of the fragmentation of the PML and PPP, which were crippled by the absence of Benazir Bhutto and Nawaz Sharif. But the landslide victory in the NWFP took even the MMA leadership by surprise. They were not expecting to win more than 25 seats. “It was probably the strongest popular wave for a political group after the 1970 PPP wave,” said Iftikhar Gilani, PML (Q) leader and former MNA, who was also routed by an obscure MMA candidate.

The success of the MMA, which received 11 per cent of the votes, is however, confined to the NWFP and Balochistan. In the other two provinces, its influence remained marginal. Incidentally, the share of votes of the religious parties was larger in the 1970 elections, when they collectively received around 15 per cent of the vote in West Pakistan. Because of the division between the various parties, the votes did not translate into as many seats. In the Frontier alone, these groups collectively received more than 18 per cent of the vote. The present election results thus cannot be seen as a true indicator of a rise in fundamentalism.

The success of the MMA will, however, have a long term impact on Pakistani politics. The alliance has emerged as a major power-broker after its stunning success in the parliamentary elections and holds the balance of power in the divided National Assembly. The alliance has already nominated Maulana Fazlur Rehman as its candidate for the country’s prime minister. It is not likely that he will get the coveted post, but prospects of the MMA forming a crucial part of a coalition government raises serious questions about President Musharraf’s promise to continue support for the United States in its war against terrorism as well as his policy of social and economic reforms. 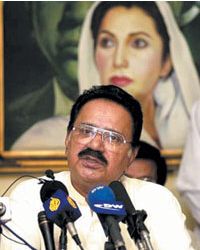 According to a senior Pakistani official, the military establishment has concluded that it is better to have the Islamists inside rather than outside the tent. The cabinet has also approved the decision to form a coalition government between the PML-Q and MMA. However, the attempts to cobble together such an alliance hit a snag vis-a-vis hardliners within the MMA, who raised the ante by demanding the top position in the government. Even if they manage to strike a deal, the differences between the parties are so wide that it will be difficult to run a coalition government smoothly.

“We will not allow any foreign troops on our soil,” declared Maulana Shah Ahmed Noorani, head of the MMA. He also declared support for “the Afghan people.” While he did not clarify what he meant, most analysts maintain the statement indicated support for the remnants of the Taliban and Afghan Pashtuns, who are not happy with President Hamid Karzai’s administration in Kabul.

The hardline declaration has caused serious concern to President Musharraf, as the Islamists not only hold the balance of power in the centre, but are also set to form governments in the North West Frontier Province and Balochistan, which borders Afghanistan. The Islamic groups have actively supported the Taliban during the US military campaign in Afghanistan and have strong links with Gulbuddin Hekmatyar, the rebel Afghan Pashtun leader who is plotting to destabilise the Karzai government.

The alliance also has serious disagreements with President Musharraf on the question of constitutional changes and has made it clear that it would not accept “amendments made by an individual.” Some MMA leaders have also called upon the General to quit the post of chief of army staff.

Despite fundamental differences with the Islamists on the domestic and foreign policy course which he has undertaken, President Musharraf has no choice but to allow them to form the government in the two key border provinces where American military personnel are helping Pakistani army troops hunt down Al-Qaeda fugitives. “The MMA is now in the driving seat,” says Syed Fakhar Imam, a former speaker of the National Assembly.

“It is a catch-22 situation for President Musharraf,” maintains a former senior Pakistani official. “He has a massive problem at hand if he hands over power to the Islamists, and is certain to face insurrection if he prevents them.”

Although President Musharraf has declared there will not be any change in Pakistan’s foreign policy, western diplomats and senior Pakistani officials contend that the US strategy in Afghanistan will be jeopardised with the rise to power of Islamists in Pakistan. Not only will the military operation against Al-Qaeda in the lawless tribal areas be affected, but there is also a growing fear that the border provinces may become a safe haven for Afghan rebels. “The country is already in the throes of a political crisis that raises serious questions about President Musharraf’s own survival in power,” said an analyst.

There has also been some move to form a government of national consensus, comprising all the major parties including the Pakistan People’s Party and the MMA. According to highly placed sources, President Musharraf was prepared to accept Amin Fahim as prime minister. But the arrang- ement ran into a snag after the government turned down the PPP condition of closure of cases against Benazir Bhutto and the release of Asif Ali Zardari in return for political cooperation. The government apparently told the PPP leaders that the cases against the former prime minister could be withdrawn by the new administration. The move could not work as President Musharraf is not prepared to allow Bhutto any influence in the new government.

The other choice for President Musharraf is to cobble together the PML (Q) and other smaller groups, but such a coalition will be extremely unstable, all of which makes the MMA the linchpin of any likely coalition government.

Most political observers agree that by trying to contrive a new political structure General Musharraf may have unleashed forces that could eventually force him from power. “General Musharraf is acting like he’s still in control,” says a senior politician. “But he may have engineered himself out of existence.”

The General may temporarily regain his hold on power by bringing the Islamists into a coalition, but most observers see events spinning out of his control.