These incidents have created panic among the teaching community, particularly those who are non-Baloch settlers in the region. “Several teachers have asked the education department to transfer them from the Baloch-majority areas of the province to Quetta or the Pashtun-populated areas,” a source in the government’s education department told Newsline.

The banned Baloch Liberation Army (BLA) has claimed responsibility for these murders in Quetta, Khuzdar and Kalat.

The situation has created greater difficulties for the education department in the placement of teachers. “No teacher is willing to go to the Baloch areas of the province,” revealed Shafiq Ahmed Khan, provincial minister for education. The minister explained that, so far, around 14 college lecturers and 22 school teachers have been transferred from the Baloch-majority areas to other parts of the province. “We are trying to prevent an educational crisis. We are sending non-Baloch teachers to other areas. Besides this, we have also devised a plan to fill the vacancies created by the departure of these teachers on an ad hoc basis,” he added.

Some sources in the education department argued that there would not be a major educational crisis in terms of filling positions as the majority of the teachers in the Baloch areas are locals. However, providing quality education could pose a problem, as competent teachers were quitting such areas, and proficient teachers were not willing to go there anymore, considering the prevailing situation.

Prior to these target killings, an aggressive campaign was launched by some hardline nationalist groups against unfurling the Pakistani flag and singing the national anthem in both government and private educational institutions in the Baloch-majority areas. Armed resistance groups had also pressurised schools to make the Baloch national anthem compulsory. In fact, a BLA spokesman, who had claimed responsibility for the killing of a senior teacher in Kalat, maintained that the slain teacher was not allowing Baloch students to sing the Baloch national anthem in the Government High School in Kalat.

Incidents of target killings first began with the deterioration of the situation in Balochistan following the army operation, during Pervez Musharraf’s stint in power. But it was generally the poorer sections of society such as barbers, tailors and jalebi-walas — who were suspected of providing information to intelligence sleuths who frequented them — who were killed, or the more well-off Punjabi businessmen. But the new trend of targeting teachers started only after the assassinations of Ghulam Muhammad Baloch, Lal Munir Baloch and Sher Muhammad Baloch in Turbat. The three, it may be recalled, were killed after the abducted UN official John Solecki’s release from the custody of Baloch nationalists.

The people of Balochistan, particularly the political parties, were apparently expecting a massive improvement in the situation in the province after the end of Musharraf’s reign, but these hopes were soon dashed by lackadaisical politics.

When the new provincial government was formed, it had withdrawn the Frontier Corps (FC), planning to solve the problems of Balochistan politically. But, contrary to this policy, the FC were not only redeployed, but also given extensive powers. The FC, instead of the police, are now being deployed to control the situation, even during peaceful demonstrations.

Some say the FC lacks the experience and fails to understand the dangers of mishandling a situation. “During a demonstration of government employees against the ouster of 150 workers from a private pharmaceutical company, FC personnel warned protestors against raising slogans criticising the Balochistan chief minister,” a journalist covering the demonstration told Newsline.

On account of the massive deployment of the FC, Quetta once again looks like a war zone — evidence that, so far, no real attempts at reconciliation have been made during the 15 months of the PPP government. PPP leaders, however, contend that, despite the many goodwill gestures by the government, some nationalist elements remain reluctant to cooperate with the government to help improve the situation. Reportedly, Interior Minister Rehman Malik has asked the Afghan government to extradite Brahamdagh Bugti. Government circles are asserting that Bugti is plotting acts of sabotage in the province from Afghanistan. 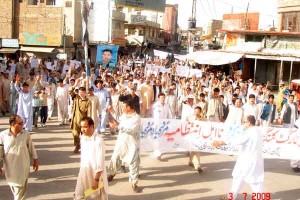 However, many independent political observers in Balochistan are of the view that “until and unless Nawab Khair Bakhsh Marri and Nawabzada Brahamdagh Bugti are persuaded to conduct a dialogue with the centre, there is no possibility of an improvement in Balochistan’s political scenario.”

Unfortunately, in the midst of all this political turmoil, the non-Baloch communities will continue to face increasing threats to their lives.