A 1959 Peugeot is parked alongside a 1914 yellow Ford. A genuine black 1964 Mercedes Benz and a sparkling white 1938 Rolls Royce face a 1929 green limousine. These gorgeous specimens and many others stand under a single tin roof in Islamabad-resident Raja Mujahid Zafar’s backyard.

Obsessed with restoring the cars of a bygone era, Zafar is driven by a passion that few others in this country can boast of. “I never allow anyone to touch the speedometers and the lights of my old cars,” Zafar tells me. The intricate job of putting together these two parts, after having cleaned them and putting them back in working order, is completely a one-man affair. “A wrong click of the screwdriver by the mechanic, and everything is lost,” he adds. The work is tedious and extremely time-consuming, and his garage is packed with vintage cars, some fully restored and in working condition, while others await their turn.

Zafar’s affair with vintage cars originated by default. Years ago, when just starting to learn how to drive, one day he accidentally ran over a pony with his jeep. To make matters worse, he had been driving the car in secret, without the permission of his elder brother, who was a stickler for precision. As punishment Zafar was sent to a workshop to help repair the damage on the jeep, but more so to ponder on the folly of sneaking off. That day, as he watched the mechanic rebuild the vehicle, his life underwent a sea change: he was fascinated, to say the least, as the jeep regained life under expert hands.

Today, bringing back rusty old Mercedeses and Mustangs to their original form gives him a deep personal satisfaction. He travels far and wide to get hold of spare parts for his collection. His happiest moments are when a much needed spare part is acquired at a throwaway price. Wherever he goes, Zafar makes it to the deepest recesses of garages and workshops for possible discoveries that could bring any one of his cars back to life. Be it international rallies, massive exhibitions, private owners looking for a deal or heirs wanting to make an extra buck courtesy their grandfather’s old car — he manages to locate diverse places and people for deals. Along the way, he is often able to procure extra spare parts, which come in handy later, since there is always a car back home that needs to be repaired.

Parked inside a garage, these cars have to be protected from the heat and rain. “Since the cars are old, the water-proofing is not reliable enough,” explains Zafar. Other problems of maintenance include keeping the batteries charged, by periodically taking the cars on drives and if unused for some time, the brakes also become unserviceable. “When they are not put to use, moisture collects on the brakes, which causes rusting. The only way to prevent this is to drive the car each month and use the brakes for some time, in order to fully lubricate the parts,” says Zafar. The biggest problem that Zafar now faces is the shortage of parking space in his house.

On a trip to London a few years ago, Zafar visited the British Heritage Museum and viewed the most spectacular collection of British cars under one roof. “People were admiring the cars, and clicking pictures while taking a walk through the history of what their country had proudly manufactured,” Zafar wistfully reminisces. 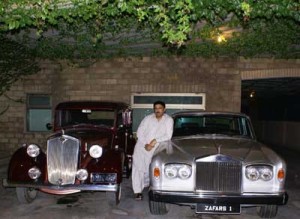 This was a turning point for Zafar. He came back fully charged and ready to present his personal collection to the government of Pakistan as a national collection for his fellow countrymen to behold and enjoy. “In Pakistan, a majority of people through the generations have neither driven these cars or even seen them on the roads. They might have had a glimpse of them in old magazines,” he asserts. “It is representative of an era most of us know nothing about. Therefore, it is absolutely necessary to put it on public display for others to see and enjoy.” To date, he has twice tried to convince the Capital Development Authority Islamabad to give him space at the model Saidpur Village, which he thinks would be an ideal location for his intended museum. The project could prove to be a financial boost for the CDA. However, since things move at a snail’s pace in government departments, Zafar is still biding his time for the day his project finally gets underway. Administrative obstacles, like the frequent postings and transfers of officials relevant to the museum plan, have not deterred Zafar from chasing his dream. He is keen to put these cars on display and has also offered to make replicas of some of the classic beauties so people can pay and take rides, thus generating some revenue for the department. Another invaluable opportunity for the CDA is his offer to restore two of Fatima Jinnah’s cars, which he saw rusting away on a recent trip to Karachi. For all this, he expects zero monetary compensation; he simply wants others to enjoy and share his passion. That will be reward enough.