Time and again, we have seen that the success of one outlet acts as a magnet, drawing others offering similar fare into its vicinity. A case in point is Zamzama, where, after the launch of the first successful eatery, a host of others joined the bandwagon. The latest seems to be the street housing CafÃ© Flo. Hardly had diners begun to flock to the new location of this French restaurant that Koel opened up in the same area and instantly became all the rage. The latest addition to this street is The Patio.

With indoor and outdoor seating — similar to the other two cafÃ©s — The Patio boasts an informal ambience: wrought-iron furniture, complete with garden umbrellas, for the outside, while a combination of glass and wrought-iron tables and chairs, along with painted wooden tables with wood and wicker chairs, furnish the indoors area.

The ambience of the restaurant is such that you feel chirpy the minute you step inside, for the dÃ©cor is bright and sunny, featuring yellow walls and light green furniture. French windows overlook the patio, lending space to the dinette. Wicker light shades, brass accessories, and colourful paintings (also for sale) adorn the walls, giving the place an artistic look. In addition, the cafe is perhaps the only wheelchair-friendly place in Karachi.

We arrived there in the evening for tea and found that, currently, it is only catering for lunches and dinners, although they do have a tea menu, and plan to serve that soon. However, the management was most obliging and, after checking with the chef, agreed to serve us items from the tea menu. To their credit, they did it without taking any extra time, scoring extra points with us for their efficiency.

We decided to try the quesadillas, which also appear on the lunch/dinner menu. A delightful platter comprising four generous portions of quesadillas accompanied with salsa and sour cream, it had an authentic taste and should be devoured on an empty stomach to do it full justice.

Among the other items we chose were cheese and corn samosas, which were divine. The corn was of the imported variety and, instead of the cottage cheese which I was expecting, mozzarella had been used, so that the filling melted in the mouth. Served with green chutney, it was the perfect snack item. The dahi baras were also delicious, and although the baras could have been softer, the combination of chanas and baras, topped with tamarind chutney, made the chaat mouth-watering. The Hot Hot Peppers were every bit of what they claimed to be and should be avoided by ulcer patients at all costs.

To wash down our meal, we tried the lemon ice tea, which wasn’t as chilled as I would have liked it to be, but perhaps that was due to the fact that, like the rest of the city, the eatery was battling with constant electricity outages. 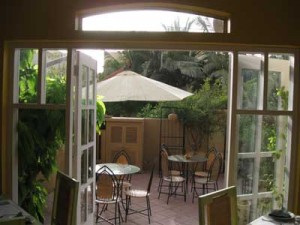 A few weeks later, I happened to visit the eatery once again, this time for lunch, and found the service to be as efficient as it was during tea. We were served a complimentary basket of wafer-thin, toasted pita bread pieces accompanied by lightly flavoured sour cream, which proved to be a welcome starter. We ordered Honey Crunch Lotus Stem from the appetisers section, and weren’t disappointed. The crisp lotus stems, smothered in a spicy honey sauce, were delicious and quite filling.

From the entrees section, we decided to order one ‘desi’ and one continental item. While Vegetarian Thali is listed on the menu, we were informed that we could also order a mixed thali which would have two vegetarian items and one chicken dish. Carnivores that we Pakistanis are, we opted for the mixed thali. Aside from a largish puri, some perfectly fried parathas, yoghurt, pickle, papadom pieces that could have done with a little more frying, and boiled rice, the platter included tasty aloo bhaji, some bland palak-daal, and chicken makhni, which I found appetising, though it wasn’t spicy enough for my friend.

The Veal Medallions on the other hand, received a thumbs-up from both of us. Comprising tender veal wraps served with mashed potatoes and veggies and smothered in a black-pepper sauce, the dish was polished off in no time.

I am told that the rooftop will also become operational once the weather turns cooler and will be available for live wok-cooking. Parties will be able to book tables in advance, and set a five-course menu of their choice, including seafood, and the chef will prepare the dishes before the diners arrive.

All in all, I feel it is an interesting concept, and one that is sure to become a hit with our adventurous gourmands, who are always on the lookout for something new to explore.