The July 31 Supreme Court judgment declaring Musharraf’s November 3, 2007 Emergency, along with the PCO, unconstitutional did not come as a surprise. But the comprehensiveness of the judgement, as well as its repercussions, will be felt by almost every Pakistani.

1. The Proclamation of Emergency by Pervez Musharraf, as well as all subsequent presidential ordinances, are unconstitutional.

2. The chief justice and all other Supreme Court justices dismissed by Musharraf will be deemed never to have ceased being judges. As such the appointment of Abdul Hameed Dogar as chief justice was unconstitutional and all appointments made in consultation with him have no legal effect. These judges will be proceeded against under Article 209 of the constitution. Under a clause that is to be added to the code of conduct, judges were also forbidden from giving legal cover to unconstitutional acts.

3. Any judgments by the Supreme Court or of the high courts which comprised or which included the aforementioned void ab initio judges, are protected on the principle laid down in the Malik Asad Ali case. But laws established before November 3 that were given permanence by the PCO stand shorn of their permanence unless it is re-established by parliament.

5. The increase in the strength of judges, through the Finance Act 2008, does not stand as it was passed only by the National Assembly and not the parliament.

The judgment is undoubtedly a historic one as this is the first time in the country’s history that steps taken during an Emergency, declared by a military ruler, along with the PCO, have been held to be unconstitutional and, all judicial appointments made during such a period, invalidated. In the present event, the constitutional deviation was only from November 3, 2007, to December 15, 2007, when the Emergency was lifted, and the constitution was restored, although with a few amendments. However, what remained unchanged despite this was the failure — initially of the Musharraf regime and, subsequently, of the PPP regime — to restore the chief justice and some of the other judges, who were unwilling to be restored without the chief justice. The PPP regime tried to break up the unity of the judges by getting some of them to take a fresh oath, which the chief justice was opposed to on principle, as he declared himself to remain the de jure bona fide chief justice of the Supreme Court, and thus refused to vacate his official residence despite his water, electricity and gas being disconnected. The present government agreed to restore the chief justice only after Justice Dogar retired in March 2009, and a Long March led by Nawaz Sharif threatened to come to Islamabad. The government buckled under the pressure and suddenly Chaudhry’s restoration became a PPP achievement. 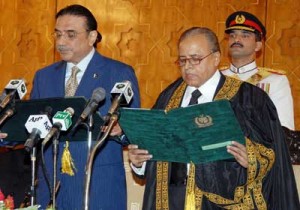 The PPP government’s resistance to Chaudhry’s restoration is known to everyone, including the chief justice himself. However, it goes to his credit that despite this, he did not act vindictively. He validated the February 2008 elections, and the oath of office administered to President Zardari by Justice Dogar in his illegal capacity as the CJ, and did not rule on the NRO (National Reconciliation Ordinance). The NRO was protected by the PCO, along with the Iqbal Tikka case, and it was possible for the Supreme Court to simply invalidate all the ordinances pending at the time of the Proclamation of Emergency, and those that were introduced from the Date of Emergency till it was lifted in December. However, the Court acted prudently and cautiously, and has given the peoples’ representatives an opportunity to look afresh at all these laws, and pass them within the prescribed time of 120 days, and 90 days (in case of provincial ordinances) from the date of the July 31 judgment. The ball is now in the court of these representatives; let them indemnify the corrupt practices of their leaders if they so wish.

It was known all along that Musharraf’s November 2007 actions were unconstitutional, and Musharraf acknowledged as much in one of his interviews. Suspension, abrogation or subversion of Pakistan’s constitution is defined as high treason under Article 6. While the Supreme Court has ruled that the Proclamation of Emergency, and the replacement of the constitution by the PCO by Musharraf was illegal and unconstitutional, it remains silent on the issue of the general’s culpability. It has left it up to the parliament to decide whether they want to proceed any further on the case. A wise decision, by all accounts.