On Pakistan Day on March 23, the President’s Pride of Performance Awards were bestowed on 36 individuals.

Among the honourees was former Pakistan captain Younus Khan, who received the award less than two weeks after he was banned from the game by the Pakistan Cricket Board (PCB) for causing rifts in the national team. Talking about his award, which he received for leading Pakistan to victory in the T20 World Championships last year, Khan said, “I have always felt proud of being a Pakistani and will do my utmost to serve my country. . .  At this point I don’t want to speak about the penalties, but I am in consultation and will lodge an appeal,” he added.

Shahid Afridi was also honoured for his contribution to Pakistani cricket. One of the country’s most popular cricketers, he shot to stardom when he hit a 37-ball century, a milestone that remains the record for the fastest ODI century. 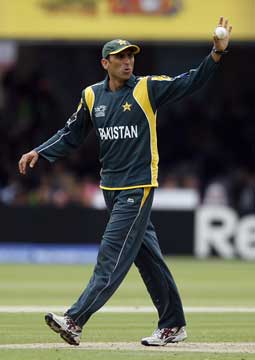 Younus Khan during the T20 Championships in 2009

Other notable winners include Fahmida Riaz for her work as a writer and poet. She has authored over a dozen works in Urdu and is also known for her activism focusing on political and social injustices.

Well-known and well-respected journalist Sultan Ahmad passed away on March 2, 2010, before he could accept his award. Over his career he had been the editor of three English dailies: The Leader, Morning News, The Sun. He also wrote many columns and articles for Dawnfocusing on politics and economics.

Professor Afzal Tauseef was another honouree for her literary contributions to the country. Over the course of her career she authored 32 books, wrote innumerable newspaper columns and spoke at international forums where her strong political convictions and support for the downtrodden, the victimised and the oppressed came through loud and clear. She had spurned the government of Pakistan’s first offer recognising her literary merit (it was offered during the Zia era with the gift of land), but she recently said in an interview with Newsline that this time the award comes “from the country that I have fought for.”

Noted entertainer Anwar Solangi was honoured for his work as an actor and radio artist. The award-winning actor had performed in hundreds of plays in both Urdu and Sindhi and acted in the Urdu film Khwahish. In his lifetime, he spoke out against the lack of support and acknowledgment given to Pakistani artists.

Masarrat Misbah was also among the honourees. She received her award for the work she has done to improve the lives of burn victims. Her Depilex Smileagain Foundation, founded in 2005, has received national and international news coverage and accolades over the years for helping women scarred by acid attacks and burning. Controversy erupted several months after she was named as a winner of the presidential award in August 2009 over serious allegations of misuse of funds by her Smileagain foundation. (Note: See below to read the comments of readers who have referred to several sources that explore the charges.)

Newsline interviewed Masarrat Misbah in late 2007 before the recent controversy over her foundation started to get public attention in late 2009 and early 2010; you can read her interview here.

Winners of the President’s Pride of Performance Awards were announced on August 14, 2009 but bestowed in March 2010.

The Associated Press of Pakistan published this list of winners:

Those given award in the field of arts include late Anwar Solangi (actor), Ms Anis Rabia Zuberi (education and sculpture), Zulfiqar Ali (art and culture) and Masarrat Misbah (restructuring of faces).

Late Dr Ursula H. Schmitz from Germany and Dr Rebecca D. Eiwen from U.K have been conferred President’s Pride of Performance for their services to Pakistan.

Note to all readers: Changes have been made to this article since it was originally published.