The US list of specially designated global terrorists contains the name of former Afghan mujahideen leader Gulbuddin Hekmatyar. But his party, Hezb-i-Islami (Hekmatyar), is now negotiating peace with President Hamid Karzai’s government. The move apparently has caused some friction between Kabul and Washington, even though a deal between Hekmatyar and Karzai is not yet in sight.

Hekmatyar is known for his surprise moves. Principles don’t matter if making or breaking alliances suit him and his party. During the rule of Dr Najibullah, the last communist president of Afghanistan, Hekmatyar teamed up with Afghan army chief General Shahnawaz Tanai to stage a coup d’etat in Kabul. It failed and Tanai escaped to Pakistan. The Islamist Hekmatyar wasn’t bothered that Tanai was a stalwart of the communist regime because the plan was to first capture power by using the general’s military power, and then improvise the next move as the situation demanded.

Later in 1994, Hekmatyar made an alliance with Abdul Rashid Dostum, the communist militia commander who had fought the mujahideen on behalf of presidents Babrak Karmal and Dr Najibullah, in a bid to capture Kabul. The Afghan capital was devastated during this round of fighting and thousands of its inhabitants were killed. The Hekmatyar-Dostum alliance was the strangest of coalitions and unbelievable as two warlords who once hated each other had joined hands to seize power. It didn’t work out and the two men subsequently drifted into opposite camps.

Hekmatyar’s relations turned sour with Islamabad after the rise of the Taliban in 1994-95. His defeat at the hands of the Taliban forced him to seek refuge in Iran. During the Afghan jihad, he had been a favourite of Pakistan’s Inter-Services Intelligence (ISI) because it was felt that his fighters were tough and effective. Other Afghan mujahideen groups and commanders, including Ahmad Shah Massoud, always accused the Pakistan government of favouring Hekmatyar. The CIA, which followed ISI’s advice, also preferred providing greater assistance to Hezb-i-Islami (Hekmatyar) and other fundamentalist mujahideen groups as they were considered effective and less prone to selling weapons.

Hekmatyar went underground after leaving Tehran in 2002. It was no longer possible for him to stay in Iran after having criticised Iranian policies in Afghanistan, where there was a strange convergence in the anti-Taliban and anti-Al-Qaeda stance of Tehran and Washington following the 9/11 attacks and the subsequent US invasion in October 2001. Hekmatyar was critical of the US attack on Afghanistan and this brought him closer to the Taliban. However, he could never gain the trust of the Taliban, who now argue that their stand has been vindicated following Hekmatyar’s sudden decision to open peace negotiations with the Karzai government. 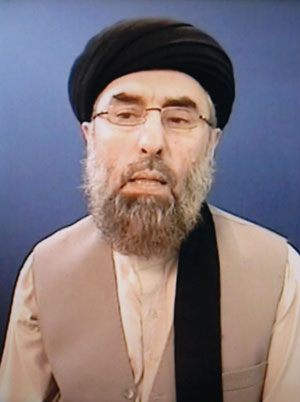 Hezb-i-Islami (Hekmatyar) has broken ranks with the Taliban-spearheaded opposition and changed its stance towards the Karzai government by sending a high-level, five-member delegation to Kabul to hold talks with him, his vice-president Mohammad Qasim Fahim and other government officials. It amounts to recognition of Karzai as a legitimate president. This is certainly a breakthrough for Karzai, who until now was being shunned by all opposition groups.

It was the first time that formal talks between an armed opposition group and the Afghan government have taken place. Though Hekmatyar is staying quiet after having labelled Karzai as a US puppet all these years, there is no doubt that the Hezb-i-Islami delegation now in Kabul as state guests of the Afghan government was sent by him. In fact, the delegation was also keen to meet US and other western diplomats in Kabul, but the Americans have shown no interest in meeting Hekmatyar’s men. However, the delegation did meet UN and European Union officials, former Afghan mujahideen leaders such as the Senate Chairman Professor Sebghatullah Mojadeddi, National Assembly Speaker Uounis Qanuni, and Professor Sayyaf and Ustad Mohaqqiq.

The delegation was led by the party’s deputy leader Qutbuddin Hilal and included Hekmatyar’s son-in-law Dr Ghairat Baheer, Qaribur Rahman Saeed who lives in Norway, the US-based Dr Daud Abedi and Amin Karim. It is worth mentioning that Dr Ghairat Baheer was released last year after remaining in US military custody and suffering from torture for some years.

The Hezb-i-Islami’s 15-point peace plan, which was a major point on the agenda of the peace talks in Kabul, called for the withdrawal of all foreign forces from Afghanistan within six months with the pull-out starting in July this year. It also called for continuation of the Karzai government until the withdrawal of foreign troops and then holding of presidential and parliamentary elections. Though Karzai’s aides were hopeful of a breakthrough in the talks and the president had requested the delegation to wait in Kabul until his return from his visit to China, the Hezb-i-Islami demands regarding the withdrawal of foreign forces in six months and holding of fresh presidential elections in no way would be acceptable to Karzai, the US and its allies. Some give-and-take on these issues could be attempted in the second round of talks that are now underway, but there has been no meeting point between the two sides to make a deal possible until now.

One more reason for Hekmatyar to give up his previous stance and hold talks with Karzai was the split in his party. Several of his former colleagues have parted company with him in recent years. Some had earlier joined the Taliban while others are now holding lucrative positions in the US-installed political system in Afghanistan. Hekmatyar’s faction has become weak and is without any substantial number of fighters. Only in Kunar, Laghman, Nuristan, Baghlan and a few other places was Hekmatyar able to put together a small fighting force, but it never made any impact on the US-led coalition forces and often cooperated with the Taliban commanders at the local level while planning attacks.

It is also worth noting that any deal between Hekmatyar and Karzai would not change the situation much on the ground as the real fighting against the NATO and Afghan armies is being carried out by the Taliban. This is the reason why Karzai or the US-led western nations with troops in Afghanistan have never offered talks to Hekmatyar. They have focused only on the Taliban, making peace overtures to them or planning new military operations against them. They know that the Hezb-i-Islami has a marginal military role even though Hekmatyar is widely known and has some political significance in Afghanistan owing to his past strength as a mujahideen leader.

The US and NATO haven’t opposed Hezb-i-Islami’s peace talks with the Afghan government, but there is no enthusiasm for this move on their part. They have also made it clear that any opposition group seeking a deal with the Afghan government must lay down arms, accept Afghanistan’s constitution, break links with Al-Qaeda and agree to become part of the country’s political process. One thing that is unsaid but is obvious concerns the pull-out of the US-led coalition forces from Afghanistan. The US and its allies would never give a timetable of withdrawal, that too to a weak political and armed group like Hezb-i-Islami (Hekmatyar), and would want to decide this matter keeping in view their own priorities.