“A national shame,” according to the PPP’s Nafisa Shah; “A slap on our face,” in the words of  Dr Iqbal Memon, President Pakistan Paediatric Association Centre; A “disgrace,” according to a news website.

Ever since they were announced, the World Health Organisation (WHO)’s Temporary Recommendations to Pakistan — as a ‘poliovirus exporting’ country and the source of a global health emergency — have been attracting the ire of the nation. Countless enraged letters to the editor in several newspapers have asked how the health ministry could possibly have been unaware that Pakistan was exporting the polio virus to other countries and, more importantly, why they waited for WHO to impose a ‘ban’ on international travellers before taking any action.

In the days immediately following the passage of the May 5 WHO recommendations, the public was engulfed in a state of confusion triggered by a general lack of information: Was there a complete ban on international travel for the next six months? Were adults also required to be vaccinated? Where could these vaccinations and their certificates be availed from? As it transpired a few days later, when the health ministry clarified the requirements, there was no ban on international travel, because the recommendations were just that — recommendations. WHO lacks the executive authority needed to impose sanctions on any country, but nevertheless, Pakistan was obliged to turn these recommendations into legislation or risk being censured and isolated from the international community.

Once again, Pakistan is being branded as the world’s most dangerous nation. Only this time, it’s for being the largest exporter of the poliomyelitis virus. In 2012, WHO’s Global Polio Eradication Initiative (that kicked off in 1998) announced that the international transmission of the virus was virtually at an end. But Pakistan, along with eight other countries, has managed to turn this around. Between January and April, the international transmission of the polio virus has re-emerged; from Pakistan to Afghanistan, from Syria to Iraq and from Cameroon to Equatorial Guinea. Nearly 90 per cent of the polio cases that still exist in the world today (that’s 59 out of 68 international cases until the end of April) have been recorded in Pakistan. This is even more worrisome because these figures only represent the low-transmission season of the virus, with the high-transmission season (May—November/December) yet to come. However, this was neither unexpected, nor is Pakistan a novice to being declared the source of an international meltdown: in late March 2012, WHO warned Pakistan of this precise situation — that a global polio emergency could be declared, along with travel restrictions for international travellers, within three months, if the necessary steps were not taken. The number of polio cases in Pakistan has risen from 28 in 2005 to 198 in 2011 and 93 in 2013. This year, the figure has already reached 67, with new cases reported every few days.

But such numbers don’t arise out of the blue. In February, Dr Altaf Bosan, National Technical Focal Person for the Prime Minister’s Monitoring and Coordination Cell for Polio Eradication, acknowledged that “we’re a risk to the entire world.” In December 2013, India announced that from January 30, no travellers from Pakistan were to enter the country unless vaccinated for polio at least six weeks in advance. Dr Bosan informs Newsline that “vaccines have been arranged on an urgent basis from the available stock, the Ministry of National Health Services has dispatched vaccination cards in addition to the cards arranged by the provinces and WHO is confident in the steps taken so far by the government.” However, all these steps were taken only after WHO ‘slapped’ Pakistan with travel curbs.

A health worker conducts a polio awareness class at a school in the Lower Kurram Agency, FATA.

These Temporary Recommendations to the ‘virus exporting’ countries, include declaring a public health emergency in the country, administering Oral Polio Vaccination (OPV) or an Inactivated Polio Vaccine (IPV) to residents and long-term visitors between four weeks and one year prior to international travel and ensuring that those travelling on an emergency basis, not vaccinated at least four weeks prior to travel, are vaccinated nevertheless — at least by the time of departure. These measures are to be maintained until the virus is not exported for at least six months and there is evidence that vaccination campaigns are being undertaken in high-risk areas. If not, then a one year export-free period is needed. If Pakistan meets these criteria, it will be rechristened as a ‘country that has poliovirus but is not exporting.’

Reacting to the recommendations, a former spokesperson for the Pakistan Institute of Medical Sciences (PIMS), Dr Waseem Khawaja, said that the federal government simply does not have the capital, the trained manpower or the space, to set up vaccination counters at all the international exit points across the country. According to the Punjab Health Department, in addition to the 400,000 vaccines in stock as of mid-May, the province needs a further two million doses. This will amount to Rs 30 million, while the military requires 60,000 vaccines plus 60,000 certificates. Discussing the requirements of the entire population, Dr Bosan says, “The total number of international travellers from Pakistan each year is around 10 million and 12 million polio doses are sufficient to meet the WHO requirements. Roughly, Rs 180 million will be required for a one-year period.” Khawaja’s prediction, that the government may not have the resources to meet the WHO recommendations, materialised only days later; the federal government has now asked provincial governments to meet the proposals, including purchasing vaccines usually purchased by the federal government, using their own resources.

Dr Memon tells Newsline that “the WHO proposals do not serve the purpose for which they have been implemented. They are giving us a false sense of security.” Any vaccine takes two to four weeks to immunise an individual against a virus; therefore, the WHO proposal that international travellers should be vaccinated, even if only immediately before departure, is futile, he explains. Moreover, most air passengers are relatively well-off and tend to already be vaccinated beforehand; they do not need further vaccination. The government is therefore squandering a large chunk of its resources on those exits where there are not likely to be any polio exporters in the first place, diverting attention from the real problem — the high-risk areas of Gadap in Karachi and Waziristan in FATA (5 and 49 polio cases out of 63 until mid-May were found in both places, respectively). “Do you think polio is being exported through air travel? No. It is occurring through the porous borders of the country,” Dr Memon says.

“So what are we achieving?” he asks. 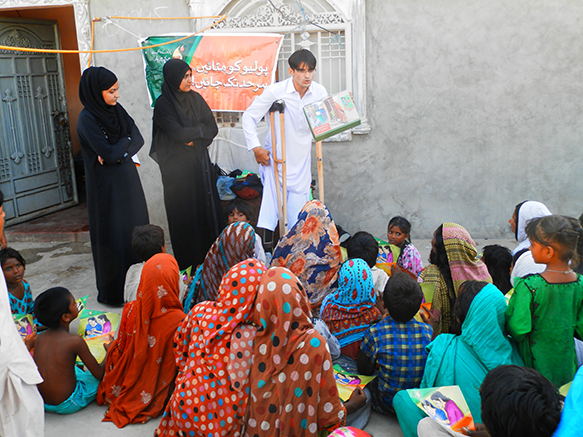 My family is from Swat, but I was born in Karachi. In 1991, at the age of 3, I contracted a fever. At that time there was no active anti-polio campaign in Pakistan. My parents tell me, on that fateful day I didn’t wake up according to my usual routine and every time I tried to stand up, I would tremble and fall back down. They got very worried and took me to see a doctor, who diagnosed me with polio and told my parents that both my legs had become paralysed.

As I grew up, I began to realise that I was different from the other children. I could not play cricket nor did I go to school, at first. I used to feel very sad, because I also wanted to play and go to school like everyone else. My family wasn’t too keen on sending me to school, because they didn’t know if I would be able to manage, but I was adamant. I started school at the age of 7; initially even my school was apprehensive. Gradually, however, they recognised my passion for education and that is what convinced them to grant me admission. The administration allowed me to leave classes five—10 minutes before everyone else so that I had enough time to climb the stairs and get to my next class. Some children did make fun of me, but then I also made friends who were very helpful. Now, I have completed my B.Com and am currently enrolled in an MBA programme at Karachi University.

Often, people give me strange looks when they see me walking on crutches and many of them don’t even accept my illness. They say it must be the result of some sin that my parents committed, which I am now paying for. Even my parents think that because I was a good-looking young boy, I was struck by the evil eye.

Polio has created a lot of problems for me. For example, yesterday I was reporting on an anti-measles conference and suddenly my leg braces broke, and to add to that, my boss kept calling me to ask for updates. I’m completely dependent on my braces and my crutches. Where we live (in Baldia), there is no hospital nearby that can repair my braces immediately; it takes two to three days and this becomes a problem. It’s at times like this that the full extent of my disability hits me.

Since 2012, I have been working as a ‘social mobiliser’ at UNICEF. We spread awareness about polio. I think my work is very important because it can save other families from facing what I go through. There are several communication officers who report to me now and I am proud that I am working as any adult would.”