The government has been caught napping while extremist organisations devise new and innovative plans to recruit Pakistani youth to their cause. From organising summer camps and holding art and debating competitions, they are now increasingly resorting to the use of humour — specifically, cartoons — to propagate their message.

Fortunately, one organisation has stepped up to the task of developing a counter-narrative: Individualland, an Islamabad-based NGO, has planned a series of comic books to counter humour with humour.Shakaybian (Pranks), the first of the series, based on four characters — Sultan, Tabinda, Amir and Kamran — sheds light on the internal workings of banned extremist groups operating in Pakistan.

The idea behind the comic book is to use humour and wit to highlight the strategy of extremist organisations in recruiting the youth of our society. Comic books have the capacity to convey informationin a manner that is both humorous and engaging, making lasting impressions on the reader. They are especially popular among the youngsters, who internalise the messages propagated within them. Every strata of our society has been deeply affected by the rising extremism, but the youth are largely absent from the country’s dominant discourse focusing on the rise of militancy in Pakistan, even though they comprise more than 66 per cent of the total population and form a vulnerable force that is extremely easy to exploit. Individualland aims to sensitise this group and make them aware that whatever the extremist organisations propagate, it has nothing to do with religion. It is merely a recruiting tool for impressionable minds.

With the assistance of comic designer Akhtar Shah, whose pen name is Shahtoon, the four protagonists of Shakaybian were kept as close to real-life as possible.

First, there’s Sultan. The fact that he’s a bit weak in his studies doesn’t seem to bother him, as he earns extra pocket money by doing odd jobs for anybody who approaches him. People start calling him ‘Sultan,’ because he’s the go-to guy who can solve all problems and take care of his friends.

Then there’s Tabinda — a college student with progressive views. Although she is young, her parents are already worried about her marriage. She is a voracious reader of magazines such as Akhbar-e-Jahaan and Sargusht. She belongs to a middle class family and has recently developed an interest in social issues around her. Tabinda is active online and reads the opinions of various bloggers. She also does volunteer work for non-profit organisations.

Amir is the third character in this comic book. With a passion for cricket, he is the captain of his high school’s cricket team, and is always found wearing sports shirts, trousers and sneakers. His room is plastered with posters of Imran Khan, Wasim Akram, Chris Gayle and Mark Waugh. His father dislikes his love for cricket and reprimands him whenever he is found playing the game. An adamant Amir hopes to play for the Pakistan team one day.

Last, but not the least, we have Kamran, who is also known as Kami. He is an educated, friendly and fun-loving young guy, who is very active on social media. 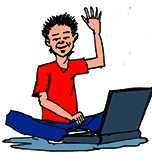 Through the four happy-go-lucky protagonists, the series highlights a number of basic themes pertaining to the recruitment strategy militants use to target the youth, their presence on social media, the manufacture of Improvised Explosive Devices (IEDs) and ‘Philanthropic Jihad’, which is the engagement of people through service delivery. The first edition of the comic explores how some banned organisations engage people in their agenda under the cover of relief camps. It is 32-pages long and was published during the pilot phase of the project, in both Urdu and English. Apart from being available online, it was also distributed among 9,000 schoolchildren. The bulk of the copies disseminated were in Urdu and within two months, a total of 1,438 individuals had downloaded it in Urdu, while 737 had downloaded it in English.

The second phase of the project is currently underway and will produce two more editions, comprising 30—35 pages, of the comic series. A total of 10,000 copies will be printed for each edition — 9,000 in Urdu and 1,000 in English — and will be distributed in schools.

A critical look at the workings of a number of banned militant organisations operating in Pakistan reveals a startling picture; not only are they extremely systematic in their methods of indoctrination, but the mediums chosen are diverse and designed to cover as much ground as possible. The target-specific messages that are broadcast are well thought out and creative, and are easily accessible to the youth. These pernicious messages are disseminated using tools such as brochures, banners, audio and video CDs, memory cards, magazines and books and, additionally, by holding events such as medical camps, career-counselling, training programmes and art camps during the summer vacations. Children participate in these events during the holidays, and the organisations identify those who can potentially work with them. Since young people from different walks of life participate in such events, these organisations have enough people to choose from. Those youngsters who respond to their radical narrative proceed to the next level, where they are asked to spend approximately 20—25 days in camps. Here, they are brainwashed and asked to play a role in the illicit activities of the organisation.

Individualland’s research has shown that the events that specifically target youngsters, such as speech contests, art competitions, study circles and youth summer camps, utilise humour and cartoons. Most of these militant outfits have an online presence as well, with active websites. In the absence of a well-built narrative against violent extremism in the country, children and young adults remain vulnerable to the emotionally-driven narratives propagated by these organisations. It is vital that one is not only cognisantof these tools but also attempts to counter such insidious messages with creative and effective responses in favour of inclusiveness and peace.

Individualland’s comic book series attempts to do precisely that. Whether they succeed in their mission remains to be seen.