A YEAR-and-a half after the popular uprising that led to Hosni Mubarak’s ouster, the likeliest short-term prospect for Egypt is a tussle for power between the two best-organised groups in the country: the armed forces and the Muslim Brotherhood.

The former has effectively wielded considerable power behind the scene for six decades, since the colonel’s coup that toppled the monarchy in 1952. The Brotherhood, on the other hand, has thrived despite — and to some extent because of — successive bouts of state repression.

Mubarak conjured up the spectre of its bright electoral prospects every time his primary ally, Washington, attempted to gently prod him in the direction of a vaguely plausible democratic facade. It would be easy to say now that events have proved him right, but his self-serving alarmism could also be seen as a self-fulfilling prophecy, with Mubarak’s apprehensions enhancing the Brotherhood’s popular credibility.

There is insufficient electoral evidence, though, that it commands the confidence of a majority of Egyptians. The Islamist majority in the post-Mubarak parliament elected at the turn of the year — which was dismissed by the powers-that-be before the Brotherhood’s candidate, Mohamed Mursi, became president — was based on the joint strength of the Brothers and the Salafist al-Nour party. Mursi led in the first round of the presidential election, but it was hardly a resounding vote of confidence, especially given that only about half of the electorate bothered to exercise its newly meaningful right of franchise. The turnout was no better in the second round of voting, in which Mursi had an edge of little more than three percent over his rival, Ahmed Shafik, a former air marshal who served as Mubarak’s last prime minister and was universally viewed as a representative of the feloul, or remnants of the old regime. 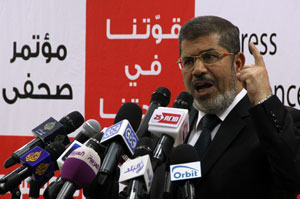 The final result in the presidential poll was a long time coming, reinforcing speculation that the Supreme Council of the Armed Forces (Scaf), which assumed direct power after dispensing with Mubarak’s services, intended to manipulate the result. The broad assumption, naturally, was that Scaf would seek to facilitate Shafik’s success, given its traditional allergy to the Brotherhood. At the same time, it has even been rumoured that Mursi actually secured fewer votes than Shafik, but was announced as the winner to stave off the possibility of civil unrest.

That’s unlikely, but it is certainly gratifying that Scaf resisted the urge to prop up Shafik. For at least the time being, however, there appears to be little question of the army ceding most power to civilians. Scaf, having equipped itself with veto powers over legislation, is evidently prepared to cohabit with Mursi, provided the latter does not step too far out of line.

Although Mursi did attempt to reconvene the parliament, after taking his oath before the same Supreme Constitutional Court that had dismissed it on the grounds that party-affiliated candidates had contested seats reserved for independents, he has generally struck a conciliatory pose during his first month in office. He has agreed, for instance, not to interfere in military affairs — which presumably includes the army’s substantial economic interests — and to honour Egypt’s existing international pacts, which implicitly includes its agreement with Israel.

Furthermore, in an effort to allay widespread apprehension of a diminished status for women and persecution of Egypt’s large Coptic Christian minority, it was announced right after Mursi’s election that one of his two vice-presidents would be a woman and the other a Copt. Before taking office, he also formally resigned from the Brotherhood.

Most of these could be construed as hopeful auguries of Egypt’s evolution into an Arab democracy, with the Muslim Brotherhood sharing the conservative portion of the political spectrum much as Christian Democratic parties do in Europe, without seeking to institutionalise religious fundamentalism. That would appear to be the best-case scenario.

There are, however, plenty of others. There is, for instance, the Turkish model, where Islamist ascendancy in electoral contests has created tensions, but thus far not insuperable ones, between the Justice and Development Party and the powerful, largely secular but traditionally coup-prone military. Then there’s the Iranian model, where a broad-based rebellion, its participants ranging from Marxists to Islamists, toppled the Shah’s autocracy, only for it to be replaced by a dictatorship of the ayatollahs.

Arguably the worst of all is the Algerian model, where in the early 1990s the results of an election won by Islamists were overruled by the military high command, unleashing a civil war that claimed thousands of lives.

Among those Egyptians who cannot bring themselves to trust the Muslim Brotherhood despite its conciliatory gestures and apparent willingness to compromise, there are many who fear the illiberalism of its medium-term agenda. After all, the Brotherhood, since it was founded in 1928, has advocated a society based on adherence to Shariah law, with the Quran and the Hadith as its primary guidelines. Its initial focus on religious and educational programmes and social services was followed by creeping politicisation, and it was involved in the assassination of prime minister Mahmud Fahmi al-Nuqrashi in 1948.

It was banned six years later, following its implication in a plot to assassinate Gamal Abdel Nasser, after having initially supported the colonel’s ascendancy. Thereafter, several of its leaders were executed while others were sentenced to long terms in prison. Among them was Sayyid Qutb, whose writings, alongside those of Pakistan’s Maulana Abu a’la Maudoodi, are often cited as the theoretical impulse behind the international Islamist upsurge of recent decades. A year before Qutb was executed in 1966, the Muslim Brotherhood gained a new member: the 14-year-old Ayman al-Zawahiri, currently the head of Al Qaeda.

Some of the Brotherhood’s leaders and activists who had imbibed Wahabi ideology during years of exile in Saudi Arabia were allowed back into Egypt by Nasser’s successor, Anwar Sadat, who dramatically switched his nation’s allegiance from the USSR to the US, but it was a short-lived romance — although, before a clandestine organisation called al-Jihad claimed responsibility for Sadat’s assassination in 1981, the Egyptian president had dispatched a number of unwanted Islamists to Afghanistan, to support the mujahideen. 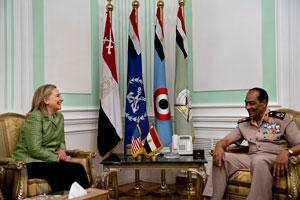 Sadat was succeeded by Mubarak, whose forays into electoral politics were invariably haunted by the Brotherhood’s spectre. Democratic norms were hardly his forte, and where rivals could not be kept out of the fray, they were almost always heavily defeated in parliamentary as well as presidential contests.

The US, which has effectively bankrolled the Egyptian armed forces for many decades, was at a loss about what stance to assume early last year when events in Tunisia precipitated mass mobilisation in Cairo’s Tahrir Square. Washington eventually decided it would be self-defeating to overtly go against the popular mood, but not before Secretary of State Hillary Clinton had publicly declared that the beleaguered Mubarak was, after all, a family friend.

When she visited Cairo last month, Clinton evidently resisted the temptation to pay a courtesy call on this family friend, even though he was purportedly on his deathbed at the time. Mubarak has since been declared healthy enough to return to prison — having been found guilty as an accessory to murder in relation to the numerous deaths during last year’s uprising, but with corruption charges against him and his family thrown out on a technicality.

She held talks with Mursi, though, as well as with Scaf supremo Field Marshal Mohamed Tantawi, during which she reportedly argued for civilian supremacy. The American and broader western reaction to the Brotherhood’s ascendancy in Egypt is a far cry from the way they responded to the Hamas organisation’s electoral triumph in the Palestinian territories just a few years ago, when aid was suspended and the democratically chosen government ostracised.

This, too, can be interpreted as a generally positive sign, even though it relates to the fact that neither the US nor its chief Middle Eastern asset, Israel, is eager to alienate the largest Arab state — whereas Palestine can easily be bullied or relegated because it is, after all, not even a country. For all that, it will be interesting to see how relations between Egypt and Israel play out henceforth, particularly in relation to Gaza, which has thus far been maintained as a large but crowded prison with Cairo’s cooperation.

Clinton’s endorsement does not, however, allay deep-seated fears about the Muslim Brotherhood among substantial sections of the Egyptian population. After all, the Brotherhood declared long ago that its interest in forming a political party would remain dormant until it was convinced that Egyptian society was ready for its chosen interpretation of the Islamic way of life. The organisation was conspicuously absent from the initial Tahrir Square mobilisations, but appears to subsequently have decided that the time was ripe for it to play a political role. It announced early on that it would not put up a presidential candidate, but Mursi is now the head of state.

What lies ahead cannot clearly be foreseen. It is besieged by imponderables. It is not entirely inconceivable that the Brotherhood has decided to play the political game, without insisting on its erstwhile fundamentals. Or it could be playing for time. It is difficult to envisage the armed forces permitting events to take their course without military interference. But they are disinclined to risk anarchy or civil war. The liberal impulse that prompted last year’s uprising appears to have diminished, but — like Mubarak — it hasn’t died, although its role in the immediate future remains indeterminate.

As Egypt prevaricates between surfacing as a renewed epitome of hope and drowning as a symbol of despair, the events to come in the months and years ahead will be fascinating to observe from afar. It could, however, prove to be a hairy experience at close quarters.

This article was originally published in the August issue under the headline “Playing for Time.”