Abdullah Qamer, the man behind the ‘Dhaaba Art Movement’ (DAM), has launched a one-man revolution. But while the purpose of this revolution is the same as that of any other, the driving force here is different. The impetus is art. In a lengthy discussion with Qamer that focuses on the dire need for change in Pakistan today, I learn that the man is bent upon bringing about meaningful social changes in the country through the unlikely medium of art.

My curiosity aroused, I ask where the idea came from. Qamer tells me that when he was in matric, he would go for walks with his grandfather, albeit reluctantly — he wanted to spend time with his friends. However, he says, those walks changed his life. One day, he tells me, as they strolled past the Mohatta Palace, he and his grandfather saw a Pathan family arguing with a guard outside the palace. They wanted to go in, but were refused entry. Sadequain’s retrospective exhibition was showing and the Pathan father was asking that his children be allowed to see the work on display. The guard insisted that the exhibition was “exclusive”, and besides, he maintained, the family would not understand Sadequain’s paintings.

“Upon observing that exchange, my grandfather, an avid art enthusiast and also a Pathan himself, decided to interject. He went up to the guard and asked if he knew who Sadequain painted for and what kind of a man he was,” says Qamer. “If we read Pakistan’s art history, we realise that Sadequain was a man of the masses, a thinker and an analyser.” Eventually, after a lengthy argument with the guard, Qamer’s grandfather saw to it that the family was allowed admission to Mohatta. And Qamer credits this as the most significant inspiration for him — and the genesis of DAM. 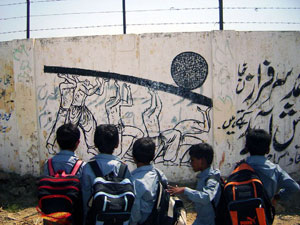 “DAM aims at promoting the arts at the most basic ground level, at the grassroots. It is the art of the students, the young, the masses, for the masses — from the lower income to upper income groups. The point is to highlight the importance of the arts and alert the public about the social, economic and political issues in the country through art,” says Qamer.

In line with these aims, DAM holds exhibitions at dhaabas and orphanages, in assorted areas where NGOs operate, or simply on the streets. These exhibitions are held not just in major cities, but also in remote areas. “We held an exhibition with regard to the political turmoil in Pakistan by the name of ‘Art for Change’ in 2010 at the Diesel Workshop near Karachi’s Cantt. Station. The exhibition consisted of paintings and sculptures and we invited railway and union workers, schoolchildren and people belonging to different spheres of life to view the show,” says Qamer.

The ‘dhaaba artists’ do not work with any NGOs, or public or private organisations, nor do they receive any sort of government funding. They plan events and exhibitions, make budgets in accordance to their needs and since everyone involved is a volunteer and all are equally enthusiastic, they each contribute whatever they can to make the event a success — in essence creating and funding the projects themselves.

Qamer tells me that when he started DAM there were very few takers for the idea. Today, he says, it has become a national movement, with the involvement of people from interior Sindh and Balochistan along with the other two provinces. According to him, this is not an urban phenomenon: it is in all the major cities, but also some of the country’s remotest villages. And today the numbers include students, professionals, artists and even labourers. Qamer says the exact number of people involved is difficult to determine, since DAM does not have any formal membership records. However, he estimates that at least a thousand people are now DAM members.

Qamer’s formal education in art started in 2005 at the department of Visual Studies, Karachi University (KU), but he insists that a substantial amount of his education also came from outside the classroom. “There is a very vibrant ‘chai-dhaaba’ culture in Karachi, particularly near the KU campus. One goes to these dhaabas and listens to people arguing about topics such as philosophy and politics, business dealings, God’s existence and national and international issues,” Qamer says, adding that even job interviews are often conducted at these dhaabas. This, he says is from where the movement got its name. “All the art movements in the world derive their names on the basis of the countries they spring from and the languages spoken there. So we decided to have a desi name for our movement — one that is pertinent to our country, and is familiar to all,” Qamer contends.

The DAM journey began, he tells me, with discussions at various dhaabas on art, philosophy, social issues, and politics. There were chats about the works of intellects and artists such as Nietzsche, Marx, Picasso, Zain-ul-Abideen and Sadequain. 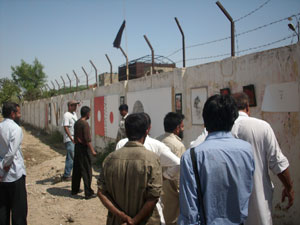 “At first, there were only people from the art departments, but soon students from other disciplines joined in the discussions too. Thus there was a lot of interaction with diverse groups of people. From a guy whose father was a union worker to the son of an elite businessman, they all congregated and talked,” says Qamer.

And of course the discussions veered to the state of Pakistan and how it compared with other nations. The problems with the country’s political institutions and the scant emphasis on art and creativity in Pakistani society became an area of particular interest — and dismay.

After about two years, the participants of these informal teahouse chats decided that they had to do something productive and proactive. And the medium they chose to do this was the arts. So, in July 2007, the Dhaaba Art Movement was officially launched.

“I have always been a dreamer, and that’s what I want for others,” Qamer says, with passion in his eyes. “I want to get people to dream, to question everything, and to have a vision for the future.” He believes art movements are not created but born. “We know that in every period throughout history, art has both portrayed and been influenced by the political and social order of the time. Art has a unique ability to bring about profound social changes,” he maintains. And since he seems to have been able to engage his target audience — the common man — the Dhaaba Art Movement continues to march forward.

Qamer acknowledges, with some evident pride, that his movement has been more successful than he initially expected. “I would say there have been positive changes, even if they are not always in direct relation to what we do. It is ultimately the people, the masses who bring about change. Our role is to show people that change is needed, and we do that by depicting this in paintings and plays. People see these, reflect on them and if they feel they are relevant to their lives and situations, they too join the struggle,” he says.

A case in point: the DAM group went to Sanghar, a city in Sindh, with paintings and a theatre show that depicted incidents of karo kari. Qamer says it gave the people there a lot to think about. They responded positively and then took it upon themselves to take the discussion further to other towns and cities. Moreover, he adds, following one of their shows, the people of the area decided to raise their voices against the dire lack of infrastructure in their under-developed town, and as a result, managed to have their demands for new roads answered.

But, Qamer concedes, change takes time and insurmountable effort, and DAM has miles to go in this regard. Nevertheless, he contends, some seeds have been sown. Also, he says, what makes his group’s job easier is the generosity and courtesy of the common man.

“Wherever we’d go, at the dhaabas in Karachi or in other towns, we were given free cups of tea and often even food.” And this from people of the most humble circumstance. Qamer also makes an interesting observation. He says he believes so much in his cause because he senses an innate understanding in people about what paintings convey, the stories they tell. “Even an uneducated, rural labourer can intuit the story from a piece of art, because it is in our genes. Our ancestors from the subcontinent saw God in stones and sculptures, so our relation with the arts is very old,” he says.

And with that kind of sublime interpretation of the arts, Qamer firmly believes they can help in the promotion of all that is good: tolerance, patience, peace and ultimately joy.

This article was originally published in the August issue under the headline “By the People, for the People.”