Is the long-sought after Higgs boson particle the final ingredient in understanding the evolution of the early universe? The Higgs boson is said to be the cornerstone and the last missing part of the so-called ‘Standard Model,’ a suite of equations that has held sway as the law of the cosmos for the last 35 years and describes all of particle physics. It is a body of work built up over several decades through which physicists have attempted to explain what constitutes matter, binds it together and makes it fall apart. Scientists at CERN, the European Organization for Nuclear Research, the world’s leading laboratory for particle physics in Geneva, provided the preliminary results for the long-sought Higgs particle on July 4.

The Higgs boson is important in the ‘Standard Model’ because it implies the existence of the Higgs Field, an invisible force field which pervades the entire universe. Several scientists were responsible for the discovery of the Higgs field including English physicist Peter Higgs at Edinburgh University in 1964, and a few years later, Pakistani scientist Dr Abdus Salam applied it in the theory of electromagnetism and weak nuclear force.

Newsline spoke to renowned Pakistani physicist, Dr Pervez Hoodbhoy to learn more about this new discovery and Dr Salam’s contribution to it.

The existence of the Higgs boson particle is a key to explaining why there is mass in the universe. What does the significance of this discovery mean for the layman?

Now that the Higgs particle has been discovered, we can say with confidence that we have a precise picture of the smallest building blocks of matter and the forces between them. There has been a long-standing puzzle about why some particles, like the particle of light called the photon, have zero mass but other particles, like the electron, do have mass. So, yes all the fuss and the $10 billion that went into building the world’s largest atom smasher was well worth it.

What exactly was the contribution of Dr Abdus Salam to the discovery of the Higgs-Boson particle?

Peter Higgs of Edinburgh University had discovered in the 1960s a very general principle by which elementary particles could go from being massless to having mass. But it was just a nice mathematical idea and no one knew what this had to do with the actual particles that constitute the world we happen to live in. Then, working separately on different continents, Steven Weinberg and Abdus Salam realised that if a Higgs particle of the right kind actually existed then everything about particles like the electron and quark could be understood within one overarching theory. Their theory is called the Glashow-Salam-Weinberg model, or ‘Standard Model’ of particle physics. This is just about the most important discovery in physics in the last 40 years. (Sheldon Glashow of Harvard didn’t have anything to with the Higgs particle; his Nobel Prize work was important in a different way.) 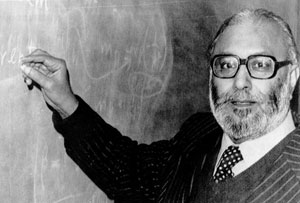 What about Satyendra Nath Bose? Do you feel that he has been ignored by the international press after the discovery of the Higgs boson particle?

No, I don’t feel that Bose has been ignored. He was a great Indian physicist who identified a broad class of particles in the 1920s that were later called Bose particles or bosons. But he did not have anything directly to do with last month’s discovery.

Now that the Higgs has been discovered, is it the end of the road? What remains to be discovered?

The discovery was nice because the last piece of the ‘Standard Model’ has been found more or less where it was expected to be. But we still don’t understand how the force of gravity fits into the picture, or why some quarks are heavy and others are light. We also suspect the existence of an entirely different set of particles called supersymmetric particles. There is a whole lot more to know.

Why is Dr Salam’s contribution not recognised in Pakistan? Who do you hold responsible for this?

Obviously it’s because of religious prejudice. Add to that the boorishness of our political leaders. Benazir Bhutto refused to meet him in 1989. I know, because I was with Salam that day in his hotel room in Islamabad. He had come all the way from Trieste and was very disappointed when Benazir’s personal assistant rang up to say she did not have time. Nawaz Sharif omitted his name from the list of distinguished alumni of Government College Lahore. Curiously, Ayub Khan and Zia-ul-Haq were the only leaders who recognised Salam. Zia gave Salam the Nishan-i-Imtiaz in 1980 after he had got the Nobel Prize. Of course, Zia pretty much had to do that because India had awarded him its national prize and it would have looked very odd otherwise.

Don’t you think his colleagues like you should come forward and tell the nation about the great work done by Dr Salam in the recent discovery?

Several of us have. Before it had a name, we tried to get the National Centre for Physics in Islamabad named as the Abdus Salam Centre for Physics. Its first director was Professor Riazuddin, who was Salam’s student and is a distinguished physicist. He tried to but the authorities refused.

Can you fill us in with the details of your association with him? You had worked with Dr Salam on various projects.

I was never a student of Salam’s but I got to know him fairly well after 1984 when I visited the International Centre for Theoretical Physics (now renamed after Salam, its founding director) in Trieste. We discussed many things, and he was kind enough to write the preface to my book on Islam and science. Later, he asked me to write the preface to a book by some other scientists on a different subject but I didn’t feel comfortable doing it alone. So we wrote it together.

What will it take for Pakistan to produce scientists like Dr Abdus Salam?

Nature endows certain individuals with exceptional qualities and Salam was exceptionally fortunate. His mathematical abilities were phenomenal. But less gifted people can also become reasonably good scientists given a stimulating intellectual environment. In Pakistan, unfortunately, the conditions for developing science are not good. Science is all about intellectual freedom and questioning the basis of ideas. It requires that people accept the scientific method, which puts logic and observation above preconceived ideas. These conditions are not fulfilled in Pakistan or in most Muslim countries.

This interview was originally published in the August issue of Newsline.