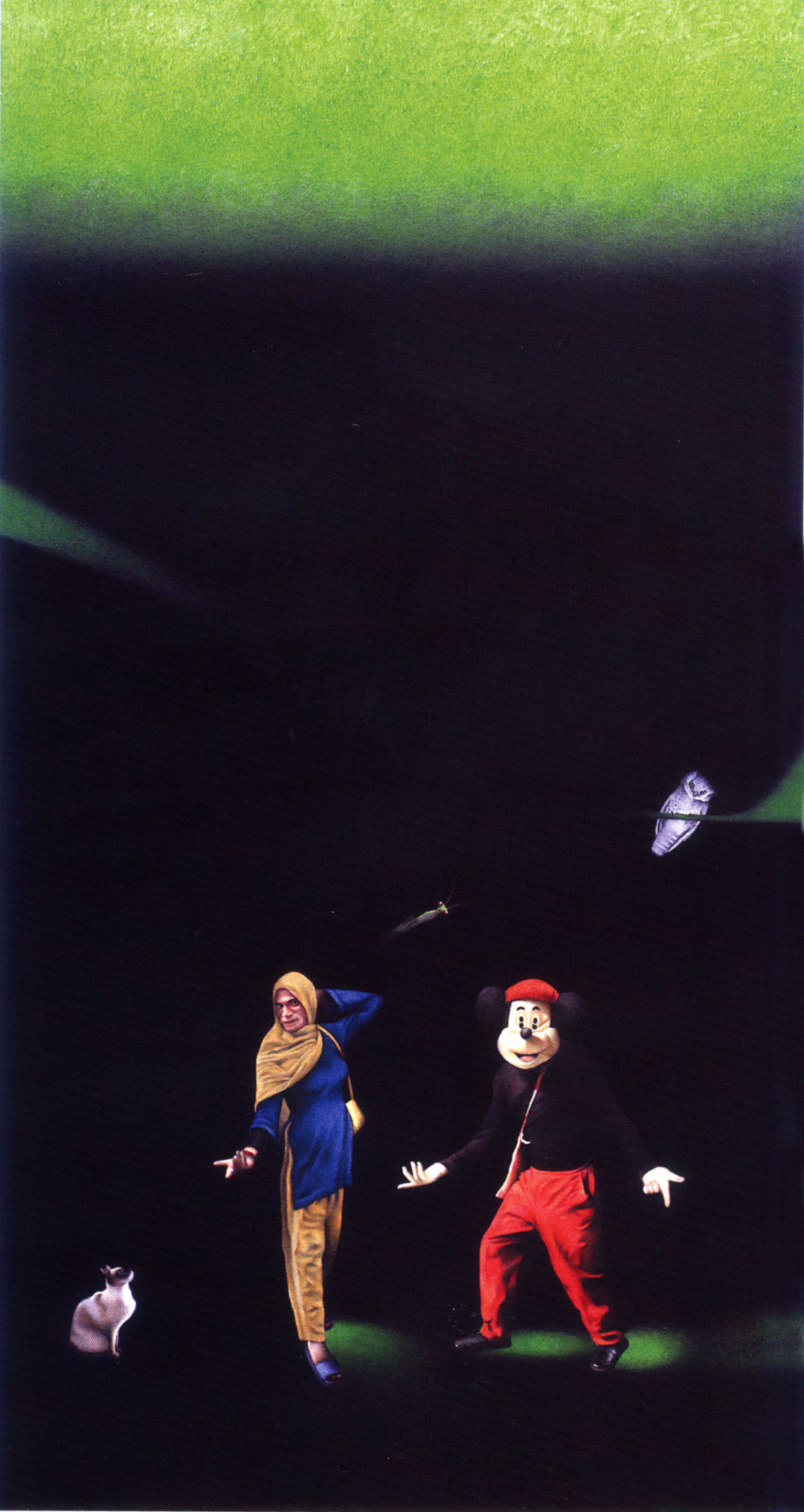 Photorealistic depictions of people and animals one might encounter on a busy Pakistani street are contrasted with eerie pitch-black backdrops. Fish and tropical birds float around cobblers and eunuchs. Trees glow in phosphorescent shades of red and blue. These are the images from Donia Kaiser’s solo show The Other Side, which was recently exhibited at the Chawkandi Art gallery in Karachi.

A graduate of the National College of Arts in 2011, Kaiser trained in the art of miniature painting, and several stylistic elements typical of the miniature form are evident in her work. Many of her paintings, for instance, could fit within the breadth of a human hand. In miniature art the relative scale of figures within the frame suggests their importance, and so in one of Kaiser’s paintings, an infant is the same size as the old woman who sits before him. And although the black expanse in the background dominates many of her canvases, the paintings still have the vibrancy associated with miniature art since, where there is colour, it has been painted in rich, opaque layers.
But equally there are other elements that break away from tradition. The ordinariness of the figures strongly contrasts the floating, surreal settings. Even some of the people and animals, upon very close inspection, appear to be glowing as if they are being viewed through a soft focus lens. Dreamlike and magical are the words that come to mind upon observing this collection as a whole.

In ‘Angelic,’ for instance, an old, bearded man floats in the top third of the rectangular frame, balancing his body on a thin string that two blue birds hold in their beaks. He looks back at the viewer, with a slight smile on his face, and holds a sickle in his hand. One of his shoes has fallen off his foot and lies below, with a yellow, flowering tree mysteriously blossoming from it. In ‘Streetstars,’ a eunuch and a man in a Mickey Mouse costume pose for the viewer. The green shadows below them give the effect that they are standing in a spotlight but their audience in the painting consists of an owl, an insect and a cat. This same spotlight effect is seen in ‘Disfunct’ in which a lota lies in a bed of grass in the centre of the small canvas and the edges of the painting are immersed in darkness. Just as in theatre where spotlights serve to isolate different parts of a performance, Kaiser’s use of glowing colours helps hone in on individuals who otherwise would get lost in the crowd.

The paintings not only have dark backgrounds but are also dark in a metaphorical sense. Be it the cobbler surrounded by floating fish or the little girl in red reaching up to the sky, the figures appear lonely and isolated. There is a sense of stillness in Kaiser’s work that can be both calming and jarring. Through the strange, surreal imagery she raises many questions in the mind of the viewer but does not offer ready answers. Instead, her paintings provide the viewer with the opportunity to meditate  on the lives of these dislocated, lonely figures.