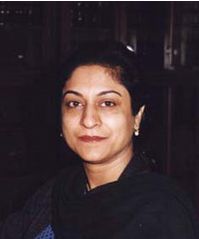 Q: Incidents such as the one in Meerwala and Mianwali must be a source of frustration for you?

A: The incidents in Mianwali and Meerwala were not frustrating but depressing. Unfortunately we have seen other similar incidents over the past several years. Human rights activists cannot afford to be frustrated. Regrettably, I have also witnessed the exchange of women on account of murder disputes taking place in the courts of Pakistan. It was only a few years ago that the Senate refused to condemn the murder of women on the justification of preserving ‘honour.’

Q: What is the legal status of the jirga and the panchayat in the Punjab?

A: There is no legal status for the jirga or panchayat in the Punjab. However, the authorities have never discouraged this practice, thereby [virtually lending] this unofficial body of self-styled judicial forums official patronage.

Q: What is the legal status of under-age marriage?

“I am not convinced that this Bill in any way militates against the rule of civil laws applicable to marriages amongst Mussalman… I cannot believe that there can be a divine sanction for such evil practices as are prevailing… we should not, for a single minute, give our sanction to the continuance of these evil practices any longer.” [He termed child marriage a] “cruel, horrible, disgraceful, inhuman practice, and went on to say:

[If] “my constituency is so backward as to disapprove of a measure like this then I say, the clearest duty on my part would be to say to my constituency, ‘You had better ask somebody else to represent you.’ Because, after all, you must remember that public opinion is not so fully developed in this country, and if we are going to allow ourselves to be influenced by the public opinion that can be created in the name of religion when we know that religion has nothing whatever to do with the matter, I think we must have the courage to say, ‘No, we are not going to be frightened by that.’”

Q: Given the upcoming elections, do you foresee any change in the status of women in Pakistan given that a significant majority of the candidates have a feudal background?

A: Women are part of Pakistan’s political process and if the October elections open up the political atmosphere, women will find greater space and better opportunities to raise their voices for improving their status. Political mobilisation has its own dynamics, which affect every section of society. The status of women in the country has seen very little improvement, but there has been remarkable improvement in a single sphere: the women of Pakistan have acquired the zeal to fight for their rights and there has been a sharp rise in awareness amongst them. Over the years, women have been successful in taking advantage of positive changes. They are better organised, more aware and able to strategise better. It is my hope that there will be greater visibility of women in every successive election which will compel the political forces to heed the voices of women.

Q: Quite a significant portion of males appeared apprehensive about the ‘strange’ ideas they maintained you conveyed to the women of Abbakhel. How would you react to such individuals?

A: I am afraid that the freedom of women is still considered a ‘strange’ idea among species that consider them their own property. It is true that the women were encouraged to see that a group of women from another city shared their grief and understood their difficult position. More and more women are beginning to speak the same language and share their experiences in a realistic manner. The visit of human rights activists goes beyond token visits of government officials. Our aim is not simply to report on an incident or to seek justice for immediate victims, but also to identify the root causes of such injustices. We make every effort to mobilise women in every part of Pakistan and more particularly in vicinities where a particular incident has shaken the people out of their stupor. We were happy to see that almost every member of the Bar Associations was outraged by the practice of ‘wani’ and a large number of ordinary people want to see a way to finish this evil exchange of women.

Q: Are the recent incidents in Meerwala and Mianwali reflective of a failure on the part of the government, judiciary and civil administration alone, or are civil society and donor communities equally responsible?

A: The incidents of Meerwala and Mianwali are reflective of the collective failure of all sections of society — civil society included. However, the state and its institutions have a greater responsibility and far more impact on the lives of people than civil society alone. For example, discriminatory laws are an instrument of repression, which are legislated by the government. In my view, the judiciary in Pakistan has done far more harm to the cause of women than any other institution. If the police torture a woman it is the judiciary that can bring these people to justice thereby placing deterrents for further violence against women. In my experience the judiciary, which unlike the police should be more progressive and educated, is the last institution to shed general biases in particular areas. There are individual judges who have played a remarkable role in protecting the rights of women, but the record of the judiciary as an institution has been dismal. For a whole decade they justified the provisions of the Hudood Ordinances which were clearly discriminatory against women. There are a large number of laws which continue to be discriminatory but our judiciary has struck down only a few policies which place unreasonable restrictions on women. I can quote judgement upon judgement where judges have sermonised about the morals of women. Some of these judgements are almost comical, others absurd.