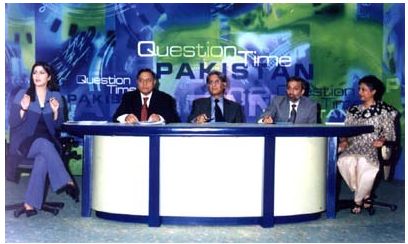 You could almost hear the mad scramble for the most coveted programme on television: BBC World’s Question Time, when they decided to move base from India to Pakistan — in keeping with Pakistan’s current status as a hotspot of news. With the BBC already reaching 24.4 million homes round the clock in South Asia and the Middle East, QTP is a potentially powerful forum, which could influence the perceptions not only of Pakistanis but of those the world over.

Several anchors — aspiring or established — were auditioned for the role of the programme’s presenter. Nearly half a dozen individuals from rival television companies put their best foot (or face), accent and journalistic expertise forward. And from the two production houses who actually made it to the pilot stage — Telebiz and Aziz Kurtha Productions — Harvard Law School barrister, Mahreen Khan from Telebiz, emerged victorious in the final playoffs.

Having hosted only a limited number of shows on Indus Vision prior to this, it would seem that Khan has taken on a rather tough challenge. Topics discussed on Question Time Pakistan are selected on the basis of their importance to Pakistani society and can include for example, its relations with its neighbours (read: India), its economy, foreign policy, and law and order. The format of the show, like its name, is similar to that of Question Time India, and includes a panel of at least four prominent personalities of the country. Before the live discussion commences, the participating audience is provided a list of 10 burning topics of that week. Juggling an audience of approximately 100 people, Mahreen has to ensure that all topics raised are commented on by all panel members, whilst looking to the audience for their views and comments, all this while keeping well within the allocated 50 minutes of the programme’s duration.

The first episode, aired on Friday, August 2 at 10:30 pm, did not disappoint. The stage had been carefully set with an interesting array of panelists — Pakistani interior minister Moinuddin Haider; Aitezaz Ahsan, a former PPP federal minister; Dr Farooq Sattar, deputy convenor MQM, and leading human rights activist, Asma Jahangir. A western attired and impeccably accented Mahreen emerged as an extremely confident host — but, alas, a host in indecent haste. Often, she cut her panelists mid-sentence, giving the impression that she was more concerned about racing through the questions rather than proper answers.

The biggest strength of the show, which will undoubtedly make it popular viewing, is the unfettered voice it provides to a very candid public. The highlight of the evening was perhaps brought about by an impromptu question from the audience — when a young gentleman sarcastically asked Ahsan and Sattar why, if as they repeatedly kept saying the PPP and MQM were so committed to democracy, were its leaders living in luxury on London’s posh Edgware road and in Mayfair, whilst ignoring the people’s demand that they return to the country to face the corruption charges against them? Judging by the resounding thumping sounds emanating from the audience, this sentiment was well entrenched. When Ahsan stated that it was constitutionally ultra vires to hold a trial in the absence of the accused and convict such a person of failing to present herself, Mahreen, a lawyer herself, expressed a visible disbelief, stating very frankly that this interpretation of the law was flimsy at best. Both Ahsan and Sattar went on to state that it was not the decision of Bhutto and Hussain to stay away from the country, it was imposed upon them by their respective parties. At this, a firecracking Jahangir interjected rather ebulliently, stating, “Why don’t you just say you are afraid of the ISI?” Once again raucous laughter from the audience before Khan skilfully moved the discussion along to the other scheduled topics: the impact of Colin Powell’s visit to the region and the Mianwali outrage.

Seeking the panelists views on the proposed constitutional amendments, Mahreen broke off to conduct an impromptu audience poll about their ramifications on democracy in the country.

Interestingly, the audience reaction was as equally balanced as that of the panel, indicating perhaps that public opinion is not as opposed to the proposed changes as Pakistan’s ‘democratic’ political parties would have us believe.

The programme drew to a close in the trademark style of a BBC production — on a humorous note, when an assistant professor from AKU asked the panel if in their opinion, Pakistanis fondness for nihari and lassi were to blame for the poor performance of the nation’s athletes at the Commonwealth games!

As the ad campaign for the show stated, “It’s time Pakistan finally got some answers.” So watch Question Time Pakistan, if you want to sort out real public perception from confused party lines. As an added bonus, viewers are sure to see prominent personalities squirm in discomfort while they are called to account in the QTP’s people’s court.