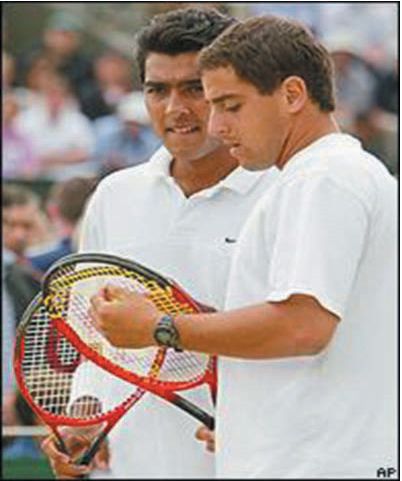 Twenty-two-year old Aisam ul-Haq Qureshi is Pakistan’s hope in the tennis arena. Talented and motivated, he was instrumental in taking Pakistan to this September’s Asia/Oceania Davis Cup Group II final against China. Playing at Wimbledon without financial support from the Pakistan Tennis Federation (yes, there is such a thing) or the Pakistan Sports Board, Aisam is the second Pakistani to make it to the pre-quarter final stage at Wimbledon and thus a hero to tennis hopefuls around the country.

The young Lahori has created quite a stir in Pakistan — and contrary to everyone’s expectations, it’s not because of his good looks and athletic abilities! Partnered with Israeli Amir Hadad, Qureshi stirred up controversy by laughing off suggestions that his choice of partner is “not morally correct” (as Sports Minister S.K. Tressler put it). As calls for his suspension from the sport were being bandied about in official sports circles, Qureshi stated he would play with whoever he needed to in order to make it to the US Open. As a result of the uproar at Wimbledon, however, he has changed his partner. Currently paired with Karol Beck of Slovenia, he has reached the finals in doubles and semi-finals in singles for the Manchester Trophy International Men’s Grasscourt Tournament.

Pakistan’s best player for the past two years, he vows to “continue to raise Pakistan’s flag high wherever I play.” Qureshi’s fine performances have shown that it is possible to reach international acclaim despite having a politically charged sports bureaucracy at home. Perhaps Pakistan can now change its reputation from a state with good cricket to a state with good cricket AND tennis.