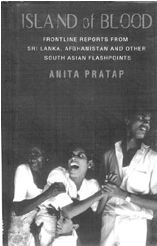 A seasoned journalist, Anita Pratap has spent the better part of her career reporting from the trenches. Island of Blood is an autobiographical account of her extraordinary life and career. Pratap’s book opens with a detailed description of her son’s birth. As one reads the book, you learn that Pratap dotes on Zubin, her only child and is very impressed by him. The cheesy acknowledgement, “You are the wind beneath my wings”, is constantly reiterated in her loving appraisal and repetition of Zubin’s slights and cynicism. The reader learns to dislike the much-loved son who detracts from an otherwise fascinating account of a rich career.

Covering Sri Lanka’s ongoing Tamil-Sinhalese struggle, she is the only journalist to have interviewed the Tigers’ revered leader, Pirabhakaran, over the years. Primarily a print journalist (she was the CNN’s Delhi correspondant briefly), she writes of her trip to Sri Lanka after the India-Sri Lanka accord had disintegrated into a war between the Indian army and the LTTE (Liberation Tigers of Tamil Eelam). Describing her harrowing journey to Jaffna, dodging Indian army patrols, Pratap imparts the sense of urgency to her reader. We are able to visualise her perilous trip to get to a forgotten, forbidden city all for an exclusive story. Her account brings home the danger that journalists go through in order to get the story out to the public.

The violence of everyday life in Sri Lanka is juxtaposed with the beauty of the surroundings. Pratap describes a scenic bicycle ride through dirt paths in the jungle with an escort of Tigers. Singing Indian film songs and enjoying the sights, it seems like an idyllic summer afternoon. The arrival of an Indian army truck shatters the peace and Pratap and company are on the run once more. Rather than fear the worst, Pratap and her cohorts choose to enjoy the natural beauty of war-ravaged nations.

She best shows how intense beauty can survive and thrive in the mayhem of war. Despite the gruesome title, Island of Blood is not a catalogue of horrors. In presenting her experiences in Sri Lanka, Afghanistan, Ayodhya and Bangladesh, Pratap maintains her sense of humour. At times, however, her observations come across as sermonising. A Sri Lankan villager’s sacrifice of her evening meal to feed her guests gives rise to a two paragraph monologue on “the unfairness of life… the cruelty of the world, the injustice of it all.” Though the writing often takes such a pious and philosophical turn, Pratap manages to hold her reader’s interest. The subject matter itself is riveting and her sharp wit and humorous observations in times of tension lighten the mood.

There is a particularly amusing incident when Pratap and her accompanying photographer are stopped at an Indian checkpost and invited to have tea with the soldiers. A superior officer sees through the journalists’ charade and demands to see their identification. On recognising Anita Pratap’s name, he stares at her incredulously. Rather than be upset at her disobeying a ban on journalists, he laughs heartily and calls her a churail. What could have been a dangerous and tense encounter (and no doubt was) turns out to be another humourous story for the veteran to tell.

As an Indian, Pratap reveals a slight bias in her writing. Speaking of the riots in Indonesia in 1999 and 2000, she mentions that more than 2500 people died — without giving details of their ethnic or religious background. Immediately following this statistic is an account of Christian villagers escaping murderous Muslims. In detailing the lives of some Afghani women, she speaks of how they were “always on the lookout for Allah’s soldiers.” The absence of quotation marks suggests that all Muslims consider the Taliban to be God’s warriors; something that can’t be further from the truth. Pratap’s report from Ayodhya, where Hindu extremists destroyed the Babri Mosque in 1992, is devoid of emotion. She does not use personal examples, nor does she give detailed descriptions of bloodied and broken bodies (a constant theme in her writings on Sri Lanka and elsewhere). This switching from emotional journalist to distanced observer is maddening.

Reporting from hot spots such as Sri Lanka must naturally be harrowing for journalists, no doubt altering their perception about what we take for granted. Pratap constantly talks of how her experiences changed her — how she learned to appreciate ordinariness and cherish the mundane.

A failing in Pratap’s book is how it yo-yos from present to past and back again. Scenes from her personal life — with family and friends — give way, often with a none too subtle transition, to scenes from the trenches. Another annoying factor in Pratap’s writing is how commendations (from other people of course) of her toughness and bravery in the face of danger are woven into the text. She calls herself “journalism’s Joan of Arc or Queen Anita”, explaining it as nicknames friends use.

Reporting from war zones is supposed to be addictive. Journalists from the trenches liken war to drugs — both are liable to kill, but the call of danger must be answered. Breathtaking nature coexists with the savagery of war — dead bodies in lush, Edenic jungles. Pratap’s island may be stained with blood, but nature, like the populace, soldiers on.