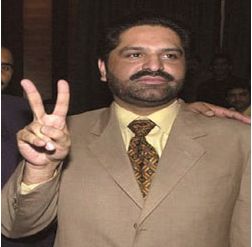 Q: Given that Sindh is faced with many problems including a law and order crisis and rampant unemployment, what will be your priority as Chief Minister?

A: I agree that the chief ministership of Sindh is not going to be a bed of roses and we will have to work hard to address all these problems. But, I think, my top priority will be to improve the law and order situation in the province. I would like to make this province so peaceful that people will be encouraged to come and invest their money without any hesitation. Peace is essential to investment, but unfortunately the confidence of foreign investors had been shattered due to the worsening law and order situation in the past. We have to work hard to convince investors that they will get every kind of cooperation if they invest in the province.

I will also make personal efforts and ask all my family friends, especially in the Arab countries, to come and invest in Sindh. We have to do this to cap the rising unemployment.

I would like to have a better relationship with the other provinces. There have been unnecessary intra-provincial differences, which is not good for the country, and we have to work hard to improve these relationships. We should think in terms of the country rather than dividing ourselves on the basis of language. Our identity should be our country, not ourprovince.

Q: Maintaining law and order has always been a Herculean task. Do you have a plan in place?

A: I think it is quite simple. I’d like to bring the rule of the law to the province and will make it apply to every one. There will be no separate laws for the rich and poor. All will be treated equally. It is ridiculous that there are different laws for the rich and the poor. If, we are able to achieve this, I think the problem of law and order will automatically be solved.

Q: Considering that your government consists of various parties and everybody has their own agenda, do you think you will be allowed to complete your tenure?

A: I think we are all clear, at least on the basic issues. I respect all parties and will continue to respect them. The problem always starts with arrogance, and I don’t think anyone of us is arrogant. We are all reasonable people and would like to sort out issues amicably. I would like to consult all parties on all important decisions and I don’t think we should have any problem in completing our tenure.

Q: One of your main allies, the MQM, has a tendency to sit in the treasury benches one day, and in the opposition, the next. Why do you think they will not do the same with your government?

A: As far as the Sindh government is concerned, I enjoy a very good relationship with the MQM. And as I said earlier, I would like to consult all parties on important day-to-day decisions, so I don’t think there will be any problems.

Q: You were only able to form the government when seven PPP and MMA members defected from their parent parties and chose to vote for you. Without their support, you were unable to get a simple majority in the assembly. How do you justify their changing loyalties?

A: Well, all these people supported my candidature in accordance with their conscience.

What can one do when parties are unable to take a decision? And besides this, their parent parties were facing their own dilemmas and internal groupings. They were all fighting against each other and the situation had turned into a farce. Their members were forced to watch a ‘puppet show’ every day. Fed up with this scenario, they chose to part ways with their respective parties and formed a forward bloc. I don’t think that they have done anything immoral.

Q: You come from a very strong feudal background, and there are many things attributed to your tribe. For example, there are reports that the Mahars have supported honour killings, and they have issued a decree to kill all those women who ‘dishonour’ the family…

A: This is absolutely untrue. We, as Sardars, have not issued any such decree. I cannot say if some people from our tribe have been involved in honour killings, but personally, I condemn honour killings. Islam doesn’t allow the killing of women and at the most if the husband and wife cannot get along, both of them have the right to separate and divorce. But killing is absolutely inhuman. I’d like to treat honour killing as murder, and to punish the killers in accordance with the law.

Q: What about the jirga system of justice?

A: Well, jirgas have been providing cheap and speedy justice to the people for years and unfortunately the people do not get justice in the courts for years and years. That has been one of the reasons that people prefer to rely on tribal courts rather than the judicial system.

Q: These tribal courts have also been condoning murders. For example, in one intra-tribal conflict in which your tribe was also involved, some 72 murders were committed…

A: What else can you do when an armed conflict between two warring tribes is not resolved? I think the best solution lies in strongly imposing the rule of law in the country and efforts should be taken to provide speedy justice to the people, so that they do not have to rely on any other system. I’ve already said that we will try to implement the rule of law in the province and that is the best we can do. We will not allow anyone to take the law in his hands and this is the only way we can sort out the problems that we confront today.

Q: What kind of relationship do you have with the Arabs?

A: They are our family friends and have been visiting us for many decades. We have very good relations with Sheikh Zayed bin Sultan of the UAE. His nephew, Shaikh Mubarak, is one of my best friends. And there are many others who have very cordial family relations with us. They have been coming to our area for years and we go hunting for deer and birds.