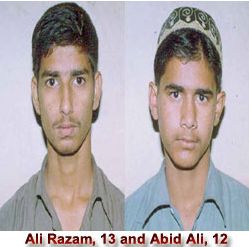 For the two boys setting off on vacation, a mere stroll from the bus-stand at the end of the first leg of their journey proved a dangerous undertaking. Not only did they land up in India — ‘enemy’ territory — they found themselves in jail, and despite being cleared of all charges in court, that is where they remain to date.

The two innocent boys are paying the price for the Indo-Pakistan hostility that refuses to die, despite a slight thawing of animosity between the two countries.

It began on August 18, 2001 when the two cousins, Abid Ali, 12, son of Khalid Javaid, and Ali Raza, 13, son of Mohd Asghar, left their native village Gaurali in Gujrat district in Pakistan to visit their maternal aunt in Sialkot. Little were they aware they had set off on a journey to hell. Disembarking at the Sialkot bus-stop, a little disoriented by the unfamiliar environs, the boys started walking in what they believed was their proposed destination. After a while, they found themselves in a village and decided to ask for directions. Hearing the word ‘Sialkot’ the villagers asked where they were coming from. Their response did not go down well with the villagers, who proceeded to hit them. Recognition suddenly dawned: the boys realised they were in India — ‘enemy territory.’ That was just the beginning of their ordeal. In the past one-and-a-half years the boys have been made to shuttle from one jail to the other in and around Jammu, confined with hardcore criminals, and with no hope of an early release in sight.

Presently lodged in Kot Bhalwal jail, the two boys — Abid donning a woollen phiran gifted by a Kashmiri jail inmate and more talkative, and Raza staring suspiciously, less forthcoming — narrate the sequence of events that led to their current plight. Finding themselves in Suchetgarh village on that fateful day in August 2001, surrounded by a hostile crowd, they were subsequently handed over to the army, in whose custody they spent two days. Then they were sent to the R.S. Pura police station, where they were kept for another two days and booked under section 14 of the Foreign Act 3/6 IPA, in case number 153/2001. After that it was a joint interrogation centre, where they spent six days. Subsequently, they were also challaned in the court of law.

From the joint interrogation centre, they found themselves in the District Jail, Amphala, where they were kept in the delinquents compartment in near isolation for five months and 11 days. They were sent back to R.S. Pura when the court declared them innocent and awarded them no punishment “due to their tender age.” The court also ordered their repatriation and directed that deportation arrangements be made.

However, they were brought back to District Jail, Jammu where they spent yet another month. Thereafter they were once again taken to R.S. Pura, where they spent another three months and 25 days, with deportation nowhere in sight. Police officials justified the delay by citing the heightened tensions between India and Pakistan, maintaining that because since December 2001, there had been no flag meetings at the border, the boys could not be sent back.

The boys cannot comprehend why they are pawns in a game of which they have no conception. Though they acknowledge that nobody has misbehaved with them — from the army men to the policemen to the inmates in the various jails, they have been lodged in — their prolonged custody for no crime at all has completely shattered them. To add to their concerns, they have heard they will be imprisoned for another two years.

The jail authorities, however, refute this. They claim that no further detention period has been specified for the boys, and they will be sent home across the border as soon as the necessary arrangements are made. Furthermore, they maintain, certain Indian officials have taken up the matter, and that even the International Committee of the Red Cross (ICRC) is studying the case.

The boys say they have heard similar refrains before. Though Abid contends he has still not given up hope, one can see his patience is wearing thin. Ali Raza, the older of the two, is visibly more embittered, and refuses to say more than he deems absolutely necessary. He mentions he has one brother and three sisters, and that he is the youngest in his family.

Abid is more forthcoming. He remembers his younger brother with a smile, talks of a married sister, his mother whom he misses the most, and his father, a potter by profession.

What torments the boys most is how their families are coping with their absence. The two have managed to send letters home, but lament that for every five or six letters they send, they receive barely one. The seven letters they have received so far are prized possessions. But they are also sources of angst. They are reminders of a home they do not know when they will see again.

While Abid refuses to admit he cries, his eyes moisten when he talks of his family. And while in their child-like innocence, the boys reveal, “this jail is better than the others. It is more open, there are games like carom and chess,” and add how they have been befriended by some Kashmiri detenues, this does not minimise their feelings of loss and insecurity.

Abid swears that earlier he had never thought of India negatively, but ask the boys whether they would ever want to visit India again, and the answer is an emphatic “no.”