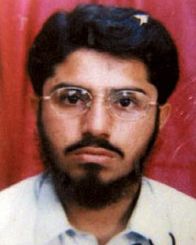 He used to ask me to pray that he die the death of a martyr,” revealed the mother of the deceased frontline leader of the defunct militant outfit, Lashkar-e-Jhangvi, Asif Ramzi, to the police. But whether Ramzi died in a blast in a building in AllahWalla Town near Korangi Crossing on December 19 , remains shrouded in mystery. The police have verified his death by holding his identity card, which was found at the scene of the explosion, as proof thereof, while his mother and wife, have also positively identified his remains. However, according to Syed Kamal Shah, Inspector General, Sindh Police, a forensic investigation is still underway. “All reports indicate that the dead body belongs to Ramzi, but we are still checking and have asked for a DNA test which will scientifically confirm his death.”

Ramzi was believed to be one of the most dangerous religious terrorists of recent times. He was wanted for numerous terrorist acts, including the murder of American journalist, Daniel Pearl, the bombing of the U.S. Consulate in Karachi, various killings of Shia doctors and the parcel bombing incidents at several Karachi police stations on October 16, for which he had accepted responsibility. These incidents led to the Pakistani police launching an intensive month-long manhunt for his arrest, and issuing of a three million rupee bounty award for his capture — dead or alive. Advertisements were also issued in the country’s leading newspapers, declaring Ramzi a ‘terrorist’.

“The blast was so strong, that it shook my entire building,” said a neighbour. “I came out of my house wondering if it was an earthquake. I saw the building collapse in front of my eyes, like a house of cards. It was very frightening, and most people just ran away, fearing a terrorist attack. We did not know what was going on.” Eyewitnesses to the blast that allegedly killed Ramzi, state that police and rescue workers arrived on the scene later, bringing cranes to clear away the debris and recover any dead bodies. Pieces of mutilated human bodies were strewn all over the site, even hanging off nearby houses and strewn on the streets. Even doctors at the mortuary in the Jinnah Post Medical Graduate College were unable to reconstruct them, making it almost impossible to identity the four victims.

The police have since arrested scores of youths belonging to various religious outfits, as well as the owner of the house at which the explosion occured. Initial investigations revealed that the four deceased militants had rented the premises in August through Abdullah Khosla, owner of Chawla Estate Agency. Abdullah Khosla, who is still on the run, had earlier told the owner that the tenants hailed from Hyderabad and were personally known to him. “We hardly spoke with anyone of the tenants, who remained quietly in their homes, especially during the mornings, but they did emerge during the evenings,” says a local, of the area, who says that the young men were sometimes seen in the local mosque, especially during the Friday congregational prayers.

None of the people living in the vicinity can confirm if Asif Ramzi had been a visitor to the building. Reports of his death are therefore based on Ramzi’s picture identity card, found at the site. Police have also backed up this claim with the recovery of a cell phone chip, which had been used recently by Ramzi to threaten police officials involved in hunting down religious militants. 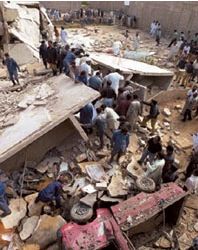 Ramzi, a resident of Ranchore Lines in Karachi, is believed to have been trained in Afghanistan and had apparently served as wing-commander in one of these camps. Ramzi had often used aliases of Shahbaz, Shah Sahib, Mufti or Ali. One of his main associates Lal Mohammed alias Lalu was shot dead in a police encounter recently, while another associate, Dilawar, is currently being held in Central Prison, Karachi. According to police records, other partners include Rashid Andha, Usman, Asif alias Choto, Qari Wudood and Kashif, all of whom are still at large. Asif is believed to have named himself after Yousaf Ramzi, an Egyptian militant who was involved in a bomb attack at the World Trade Center some years ago.

Initial reports suggested that the explosion was the result of an accident, as police investigations revealed pieces of an anti-tank rocket, and the remains of dangerous chemicals, used in the making of explosives. “The kind of chemicals we have recovered include zinc citrate, ammonium oxide and liquid menthol, while two ballistic caps of 107-millmeter rockets and a part of its casing have also been found,” says Deputy Inspector General of police, Fayaz Leghari. In addition, a few bags of ammonium nitrate or fertiliser were also found on the premises.

According to police officials, terrorists had used the same materials to make two bombs, previously detonated in the city. “We have detected urea, a fertilizer used in both the suicide attacks at the US consulate and another at the Sheraton hotel in Karachi, in which eleven French nationals were killed,” says a bomb disposal squad official.

Experts from the bomb disposal squad tell Newsline that manufacturing a bomb from urea requires the kind of expertise only recently seen in Pakistan. According to them, similar explosives were employed in the bombing of the World Trade Center in New York several years ago. “The local militants who have remained in close association with Al-Qaeda members in Afghanistan have picked up this deadly art from them,” says a source who is privy to the investigations. The experts state that only the Al-Qaeda militants were trained in such modern methods of destruction, and that these findings clearly indicate links between local militants and international terrorist outfits.

Police also found two motorbikes inside the house and a handwritten list of ‘wanted terrorists,’ naming senior police officials involved in operations against the militants. “The fuel tank of one of the bikes was loaded with explosive material which could have been detonated at any time by remote control,” says Kamal Shah, IG police, who believes that, given the type of explosives involved, the group’s members were probably upto something big.

Security experts contend that there is a strong likelihood of more attacks against foreigners. “They have the potential to turn the entire country into ruins within a few hours. However, they are only looking to strike against western interests,” says a senior intelligence official. “There is a substantial body of intelligence which indicates that dozens of foreign terrorists are hiding in the densely populated city of Karachi as guests of outlawed religious outfits. They will commit terrorist acts,” he adds.

This prophecy is backed up by the recent arrest of seven militants implicated in the killing of the French naval engineers. According to insiders, one of the militants, Asif Zaheer, has revealed that the French engineers were mistaken for US citizens. He states that his outfit was trying to track down the timings and movements of US Consulate officials in Karachi. Their job had been hampered when security was tightened after activists of Harkatul Mujahideen Al-Aalami carried out a suicide attack at the US consulate on June 14.

With hundreds of militants belonging to outlawed religious groups sitting idle, and many in hiding, officials fear that Pakistan may well be a ticking time bomb. As many as two million Afghans currently live in Karachi, which has served as the Taliban’s main transit point to Afghanistan. “These men are motivated, trained and committed, and will create serious problems for the country’s security,” warns a police official. And judging by the various acts of terrorism Pakistan has witnessed recently, he believes that the militants have already begun their deadly mission.