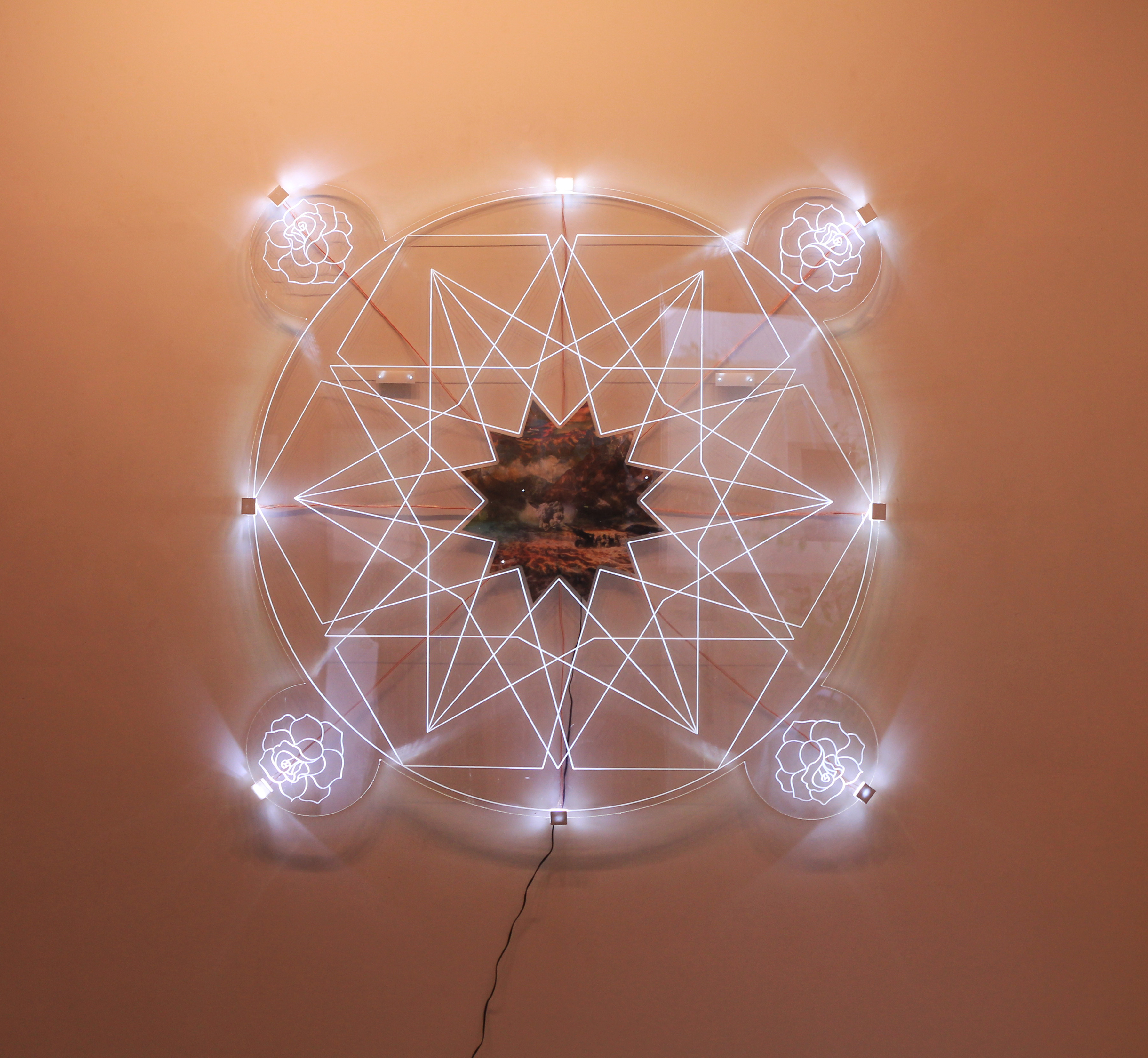 Drawn Attack. The title of Karachi-based visual artists Taqi Shaheen and Kohat-born Aamir Habib’s latest exhibition at the Canvas Gallery is loaded with meaning and it immediately draws to mind the United States’ drone warfare in north-western Pakistan, that has been in effect since 2004. As expected, drone imagery dominates the majority of the works at the exhibition, and the artists, who are fast rising to become household names in art circles, explore the theme of drone attacks within the larger context of imperialism and colonialism, both past and present.

Stepping into the gallery, the first artwork that captures the eye is a large, digital print and acrylic installation by Aamir Habib, titled ‘Everybody Loves Flowers,’ which, upon close observation one realises, perhaps should have included a question mark at the end. Lit by LED lights, the image depicts American soldiers, in desert camouflage garb from the Iraq war, standing in front of an exploding canon, with the smoke vaguely forming the shape of a rose. In the backdrop, towering mountains cut into an azalea-tinged sky as two drones hover overhead, while civilians in everyday clothing can be seen at the foothills. The image, placed within a disc-shape and surrounded by geometric patterns, is striking, and Habib presents an interesting contrast between the modern and ancient technologies of warfare, as well as the disparity between the natural scenery and the unnatural, man-made violence.

Habib hails from northern Pakistan himself and is familiar with the picturesque landscape, as well as the troubled geopolitics of the region, which dominate his works. In ‘Highway to Heaven,’ a photograph of mountains and a serene lake is printed on a canvas shaped like two joint circles — suggesting that the view is through binoculars. A heartbeat line — its jagged lines resembling the sharp edged-mountains in the backdrop — can be seen running across the image. At first glance, the image seems to be a positive one but, judging from the overall theme of the exhibition, the slightly foreboding presence of the binoculars and the smoke at the corner of the picture (which the heartbeat line dissolves into), the artist may be trying to give us a glimpse into the mind of either a suicide bomber or an officer/soldier fantasising about their perceptions of the afterlife which, ironically, resembles the very places on earth they are destroying.

Taqi Shaheen pays tribute to the late columnist and philanthropist Ardeshir Cowasjee with a black and white portrait, in which the text, “Adios Pakistan. Hijack the drone and go, go, go. Vamoos. Best, Ardeshir Cowasjee,” runs across the image. According to Shaheen, who sees Cowasjee as an icon and role-model, the text is from an obituary written by one of Cowasjee’s friends who received this advice from Cowasjee when asked if he should return to Pakistan. 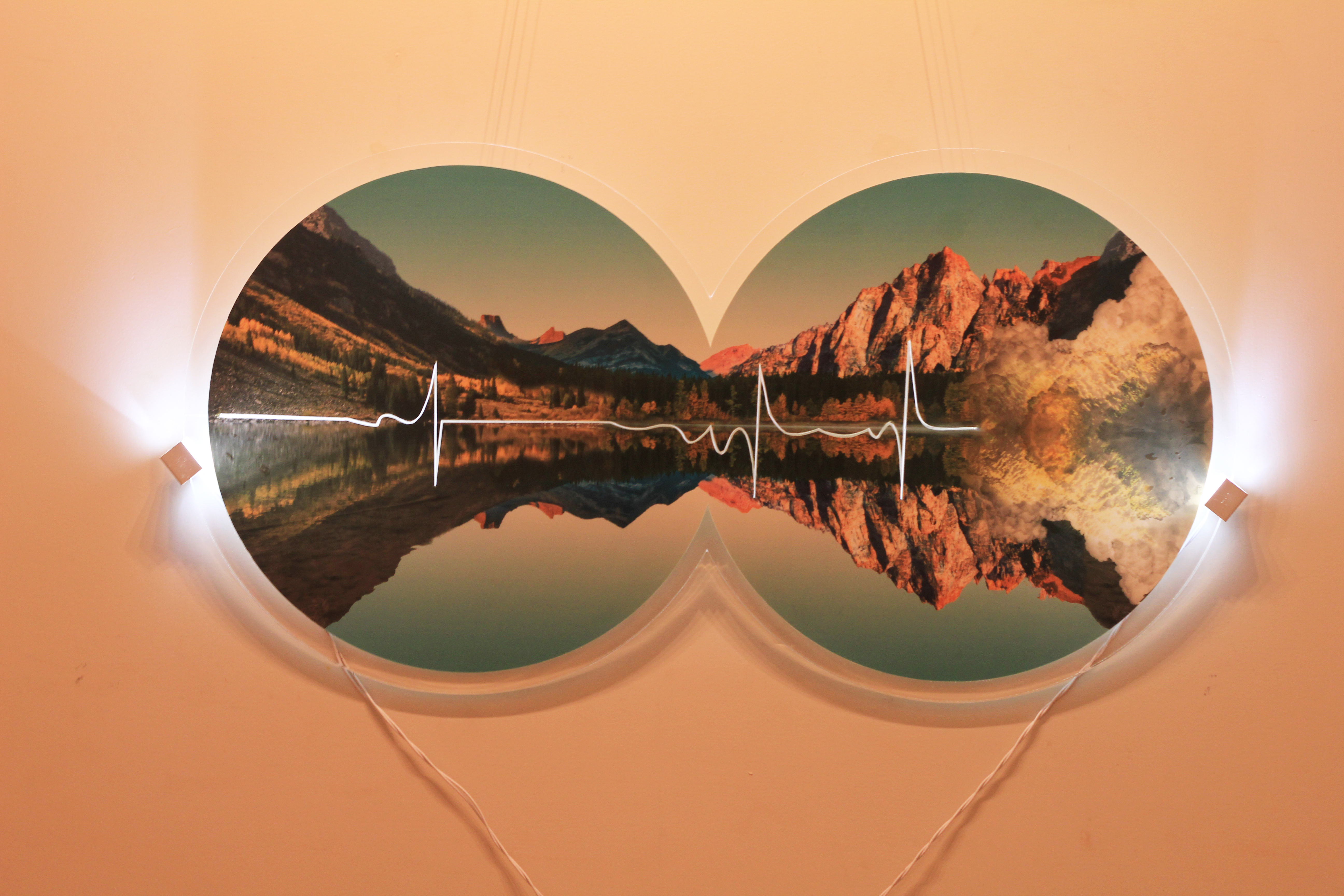 Taqi Shaheen pays tribute to the late columnist and philanthropist Ardeshir Cowasjee with a black and white portrait,  in which the text, “Adios Pakistan. Hijack the drone and go, go, go. Vamoos. Best, Ardeshir Cowasjee,” runs across the image. According to Shaheen, the text is from an obituary written by one of Cowasjee’s friends who received this advice from Cowasjee when asked if he should return to Pakistan.

In ‘She Loves Me, She Loves Me Not,’ Shaheen presents what look like the propellers of a jet-fighter plane or the head of a drone, forming the petals of a flower, to comment on the United States’ flawed romance with drones. Evidently, all is not fair in love and war. The image is one of the most interesting and thought-provoking ones in the exhibition, highlighting the vagaries of fate and the absurdity of war. The print may as well have been titled, ‘Am I Next?” 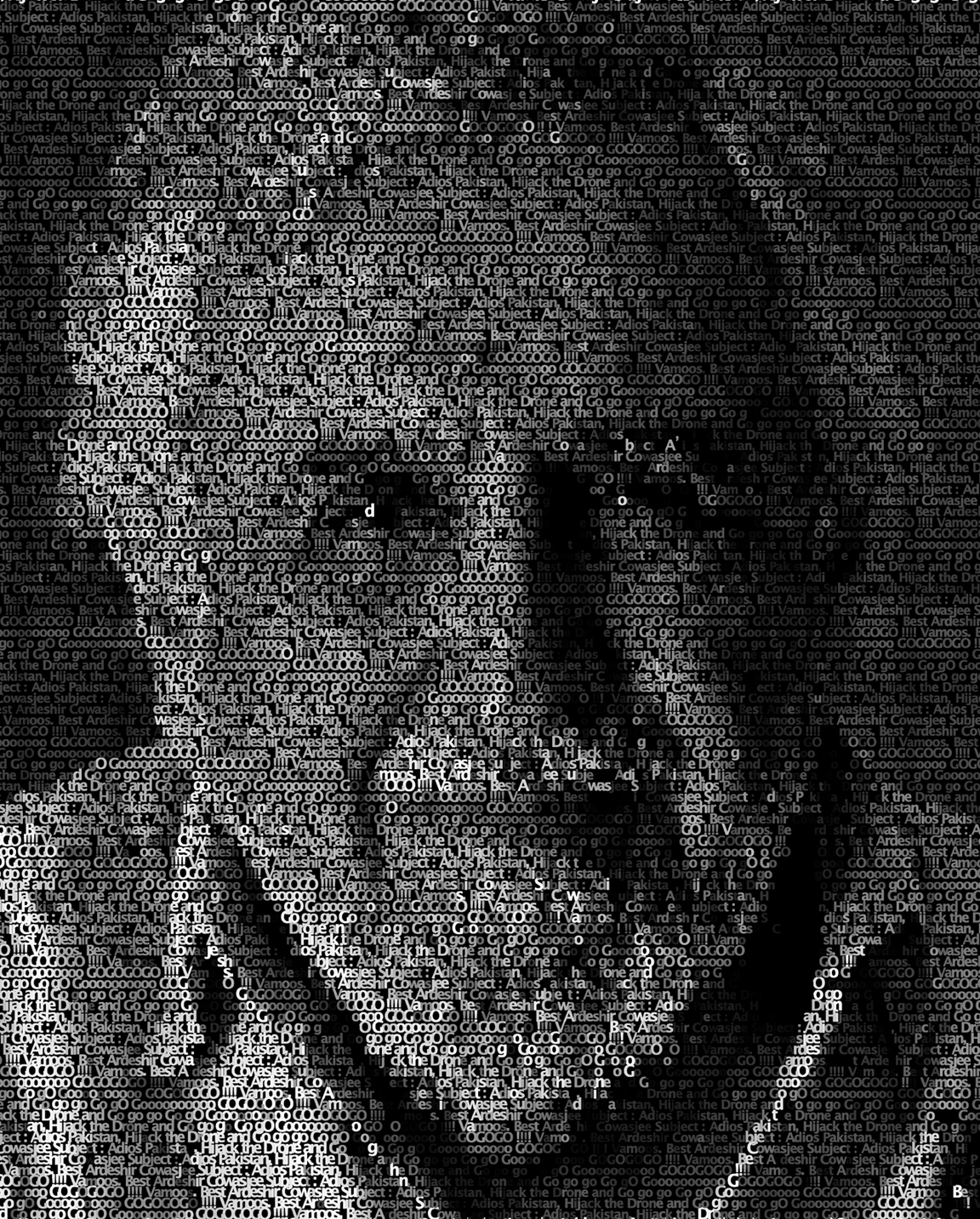 Shaheen uses a kaleidoscopic pattern in many of his works, including ‘Tomorrow Is Just Another Yesterday,’ which is a black and white image from the Raj era, showing a British soldier grabbing at the neck (and the jewels that surround the neck) of a beheaded and bejeweled Indian nawab who grimaces in disgust. The kaleidoscopic effect gives the image a surreal quality, as well as a sense that a pattern — of colonialism and the usurping of riches and resources — is being repeated.

With such a heavily politicised theme, the artists could have run the risk of repeating clichÃ©s and tried patterns, yet they have done an exceptional job in presenting artworks that are as thought-provoking as they are unique. The uncertainties of politics and fate may continue, but one thing is for sure: Expect great things in the future from Taqi Shaheen and Aamir Habib.