Imran Khan was right when he recently remarked that the Pakistan Tehreek-e-Insaf lost some of the assembly seats in the August 22 by-elections due to its “stupidity and mistakes.”

However, this wasn’t the first time that Imran and his PTI had been ‘stupid’ and committed mistakes, rather big blunders. And it is also a fact that the party leadership has yet to learn from these blunders.

In the by-elections, the PTI lost two of the three National Assembly seats that Imran had convincingly won in the May 11 general election. In fact, he had kept the Rawalpindi seat that he had narrowly won against PML-N’s Hanif Abbasi and given up the other two in his native Mianwali and in Peshawar because he had won from there with huge margins and retaining those in the by-polls seemed easier. But thanks to poor choice of candidates, rifts in the party, the ill-organised election campaign and Imran’s inability to give more time to electioneering — not to mention the unsatisfactory performance of the PTI government in Khyber Pakhtunkhwa — PTI candidates were shockingly defeated in Mianwali and Peshawar.

In Mianwali, first Ayla Malik was named as the PTI candidate because she happened to be the granddaughter of the late West Pakistan governor, Nawab Amir Mohammad Khan of Kalabagh. After her disqualification due to her fake degree, the ticket was awarded to another family member, Malik Abdul Waheed. It is common knowledge that many people in Mianwali are opposed to the Nawab of Kalabagh’s family due to a host of reasons and have agitated against them in the past to protest against their high-handedness. Awarding the PTI ticket to someone from the Nawab of Kalabagh’s family provoked the tribes and groups opposed to them and prompted them to rally behind the PML-N candidate Obaidullah Shadikhel instead. Besides, Ayla Malik wasn’t really the agent of ‘change’ that the PTI had promised; she had been part of General Pervez Musharraf’s regime and had practiced status quo politics. Her recommended candidate, Malik Waheed, didn’t fit the description of the ‘change’ that Imran wanted either.

The result was the loss of the NA-71 Mianwali seat that Imran had won by polling 42,316 votes on May 11 against the 17,672 secured by Obaidullah Shadikhel. Imran had earlier defeated him by a bigger margin in the 2002 general election. Obaidullah Shadikhel fully exploited PTI’s wrong choice of candidate, made strong local alliances and used the PML-N vote-bank to claim the seat in the by-polls and avenge his two previous losses to Imran.

The PTI loss in Peshawar was a bigger shock because it lost from the NA-1 constituency that Imran had won by a margin of 66,132 votes against ANP’s Ghulam Ahmad Bilour in the May 11 general election. He had polled 90,500 votes while former federal railways minister Bilour, otherwise a formidable candidate who once even defeated Benazir Bhutto from the same constituency, could manage only 24,468 votes. But the tables were turned in the August 22 by-election when Bilour obtained 34,386 votes to defeat PTI’s Gul Badshah who got 28,911. If one were to do some simple calculations, the PTI votes dropped by around 62,000 in the space of three months while ANP increased its share of votes by about 10,000. Though Bilour was backed by two major political parties, JUI-F and PPP, his morale-boosting win became possible largely due to the strange choice of Gul Badshah, a relatively unknown PTI activist who was accused, even by his opponents within the party, of being an Afghan refugee. It seems the PTI was overconfident following Imran’s impressive win and this prompted it to put up a party worker against the nationally known and resourceful Bilour to show its new-found electoral strength. There were 17 candidates for the PTI ticket and almost all of them either worked actively against Gul Badshah in the by-election or stayed away from the contest. One such candidate, Samad Mursaleen, rebelled against the party after being denied the ticket and contested as an independent. He lost badly, but his campaign hurt the PTI’s image and made it look like a divided party. Gul Badshah was Imran’s choice as the party candidate because he reportedly ran his election campaign for the May 11 polls and secured a promise from him that he would be allotted the ticket. 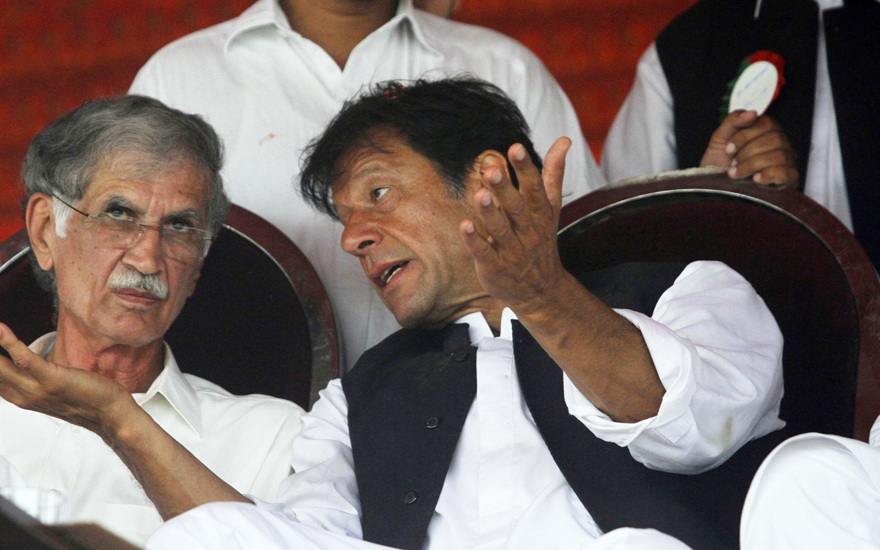 The PTI was again criticised for giving the ticket in NA-5 to Chief Minister Pervez Khattak’s son-in-law, Dr Imran Khattak. Pervez Khattak had won this seat by a huge margin on May 11 and he felt his son-in-law would be a strong and unbeatable candidate due to the family’s influence in Nowshera. He was proved right, but the award of tickets to the kith and kin of PTI leaders contrasted sharply with Imran’s claim that he was opposed to dynastic politics and was campaigning to bring revolutionary changes in Pakistan’s feudal and money-based political system.

The defeat in the provincial capital was a huge setback for the ruling PTI in Khyber Pakhtunkhwa, but it made amends by attaining an unassailable lead in the NA-27 Lakki Marwat constituency, where the final result was withheld by the Election Commission of Pakistan on the orders of the Peshawar High Court. The court had ordered repolling at the women polling stattions where the local elders, political workers and parties had agreed among themselves not to allow female voters to vote. PTI’s Col (Retd) Amirullah Marwat was poised to snatch this JUI-F seat that Maulana Fazlur Rahman had won by a margin of more than 29,000 votes against the PML-N-backed Salim Saifullah Khan on May 11 and then fielded his younger brother Maulana Attaur Rahman in the bypolls. The PTI candidate is leading by 6,814 votes and the result of the repolling at the nine female polling stations cannot alter the result. Though Col Amirullah Marwat won largely due to active support from the influential Saifullah family that wanted to avenge its defeat at the hands of Maulana Fazlur Rahman, the victory would still be a morale-booster for the PTI in the southern districts of Khyber Pakhtunkhwa, where the JUI-F until now has been the strongest electoral force. The win has also raised hopes among PTI workers that they could also snatch the NA-25 Dera Ismail Khan-cum-Tank seat from the JUI-F which had won it through Maulana Fazlur Rahman on May 11. In line with his policy to keep everything in his family, the Maulana has fielded his young son Maulana Asad Mahmood in the bypolls on this seat, but his challenger, PTI’s Dawar Khan Kundi, is in a stronger position due to support from his Kundi tribe and anti-JUI-F forces. Besides, the voters appear to be angry with the Maulana for fielding his brothers and son in these constituencies and doing little after coming to power to resolve their problems or to carry out development work in their areas.

The PTI also retained its NA-13 Swabi seat that was won on May 11 by the party’s provincial president Asad Qaiser, now the speaker of the Khyber Pakhtunkhwa Assembly. His brother Aqibullah Khan was awaded the PTI ticket despite opposition by several other hopefuls and he won comfortably against JUI-F’s Maulana Attaul Haq Dervesh, who was backed by a powerful alliance of ANP, PPP and PML-N. The PTI is also poised to retain the NA-5 Nowshera seat as its candidate, Dr Imran Khattak, was in the lead against ANP’s Daud Khattak. The result was withheld on the orders of the Peshawar High Court which ordered repolling at some women polling stations where the female voters couldn’t vote. The PTI was again criticised for giving the ticket in NA-5 to Chief Minister Pervez Khattak’s son-in-law, Dr Imran Khattak. Pervez Khattak had won this seat by a huge margin on May 11 and he felt his son-in-law would be a strong and unbeatable candidate due to the family’s influence in Nowshera. He was proved right, but the award of tickets to the kith and kin of PTI leaders contrasted sharply with Imran’s claim that he was opposed to dynastic politics and was campaigning to bring revolutionary changes in Pakistan’s feudal and money-based political system.