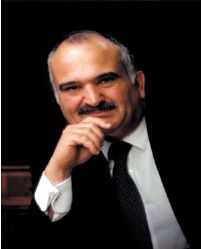 Q: Do you feel that the already fragile Arab League has been splintered even further by the Iraq war given the role that Qatar and Turkey are playing?

A: If we can describe the current status of the Arab League as splintered, it is mainly due to the collapse of the concept of multilateralism, and the preference of the individual members of the League to follow a bilateral orientation in their relations. I have often called for an OSC (Organisation for Security and Cooperation) type agreement on a regional level, inclusive of Turkey, Iran, as well as Pakistan, in order to promote a code of conduct for the whole region. Certainly, Qatar is a member of the Arab League and its role has developed with the full knowledge of the League. As for Turkey, being a member of NATO, it has its own concerns regarding the future developments in the political structure of Iraq.

Q: The Arab League maintains that they can find a solution for Iraq. However, given their rather dismal track record over the Palestine issue, how confident are you that they will deliver?

A: In the absence of a common Arab and Islamic discourse, and with the vacancy of the Arab and Islamic seat on the international arena, it is not only Palestine and Iraq, but the whole Arab and Islamic worlds who can expect further conflicts leading to a Balkanisation of the region. It is time for us Arabs and Muslims to formulate a committee of wise persons to bear the responsibility of engaging with this new American century.

Q: Jordan is seen to have a very close relationship with the US and there is a perception that it has not played a strong enough role in the Iraq war. Would you comment?

A: I cannot speak for the official position of Jordan. I have been outside the decision-making machinery for the last four years. I would like to say that Jordan is a responsible member of the international community, and plays an important centrist role at the regional level. My country has always stood in support of the Iraqi people, and still maintains the same position.

Q: How do you view future US/Jordan relations in the wake of increasing anti-US sentiment in the Middle East?

A: A large percentage of Jordanians have studied and have ties in the USA, therefore there is no anti-American people feelings as such. There are, however, some doubts about the intentions of the administration of Mr. Bush. You have to remember that, our people are psychologically caught between the Israeli tanks in Gaza, and the alliance tanks in Najaf Sharif and Karbala. Certainly there is a feeling of despair and emptiness, but I hope that eventually some statesmanship can come out of this.

Q: What is your view of the geo-political future of the region after the war is over and Americans instal their ‘viceroys’ in Iraq?

A: Of course, direct or indirect American rule in Iraq is unacceptable. I ask, where is the cultural affinity in appointing a ‘viceroy’ in Iraq? In order to stop the possible Balkanisation of our region, we have to understand the reality that the 1991 Gulf war has taken us to the Madrid Conference. This present tragedy should take us to a regional conference that would deal once and for all with the questions of discrimination, weapons of mass destruction from Israel to the Asian sub-continent, terrorism and its definition, as well as the creation of mechanisms to deal with the sharing of natural resources. It is time that the west helps also with the concept of intellectual investment in our region. American officials have repeatedly stated their desire to affect an early withdrawal from Iraq. They have also stated the importance of an Iraqi government elected by the Iraqi people. I find the above statements contradict any idea of direct rule, or [the appointment of] a ‘viceroy.’

If Iraq is going to develop into a modern participatory culture where the sovereignty of the citizen is recognised, where the enormous talent of millions of Iraqi expatriates and exiles all over the world is regained in their homecoming, then this cradle of civilisation could flourish as a beacon of freedom in the region. But if it is to be business as usual, as the Americans said of Somoza: “He may be a son of a bitch but he is our son of a bitch!” If that is the attitude to regional leaders — one minute a military dictator, the next an ally — then this duality will lead us down the road to hell, alongside the Arab duality that all these clever foreign analysts of Arab shortcomings write of from afar.

Q: Do you feel that the Iraq war just might be the catalyst to finally unite the Muslim Ummah?

A: A universal ethos cannot be thought the property of any one culture. The Muslim Ummah has certainly the important responsibility of reviving the consciousness of Najaf Sharif, of Mecca and Medina, of Al-Azhar, of Qom, and of attempting to unite our common Islamic references. We need to provide for a system that does not transform the man of religion into a politician, and whereby religion moves out of day to day governance and is elevated above it. A system that establishes the concept of Shura. Religion itself holds a sublime place in the hearts of believers.

Q: Do you agree with the view that the war in Iraq will spawn a new wave of terrorism and breed another generation of suicide bombers, thus making the west even more vulnerable to terrorist attacks?

A: Certainly the war in Iraq is likely to increase the potential for terrorism. And I agree with President Mubarak of Egypt, that we are likely to see the emergence of hundreds of bin-Ladens. In our part of the world repression is on the increase, and I sincerely hope that no one will have to bear the brunt of this “clash of ignorance”. Our leaders must shoulder their responsibilities in the face of the politics and economics of despair. The truth is that the time has come for a reform movement throughout the Arab world whereby Arabs shoulder their own responsibilities for their own destiny. This should be achieved on the basis of speaking an international idiom, and not through the continuing exclusionist ghettoisation of the Arabs, or through external dictate.

Q: Will the US be forced to play a more positive role in the Palestine issue and will the two-nation theory ever become a reality? How viable is the US roadmap for the region?

A: There is skepticism about the likely American involvement in the peace process between the Palestinians and the Israelis. In the last few years, the USA has vetoed fifteen resolutions in the Security Council condemning discrimination , and nineteen resolutions related to Palestinian national self-determination. However, currently and through the declared intentions of the American administration, there seems to be a serious effort to follow the road map that should create a two-state solution. If the Madrid Conference was the starter of peace, then perhaps a similar regional conference can bring a comprehensive peace to all the peoples of our region. I very much hope that the ‘roadmap’ that is brought out at opportune moments only to be discredited by the Israelis, will not be brought to bear as a pacifier in the face of all the pain this region has suffered. After all the blood, ruin and trouble, the international community is going to have to answer to the Iraqi people, as it has yet to answer to the people of Palestine.

Q: Will this new move towards democracy in the region threaten Arab monarchies?

A: Democracy is not a commodity for import and export. And I have always expressed my reservations about authoritarian monarchies, and totalitarian republics. The main crisis in our region is very much the consequence of the total absence of governance in the various systems. Our challenge is going to be, providing the citizen with the will and means to direct their lives, and not least greater confidence in their own rights and abilities to achieve their particular aims through peaceful means.

We must draw inspiration from the skyline of Karbala and Najaf, as we grieve over our plundered past and devastated present in this state of spiritual as well as physical devastation. God-willing we will have the strength to recognise that we have all — globally — failed to achieve truth, justice and peace. This, accompanied by the breakdown of good governance, became the recruiting ground for extremism. The shameful poverty and neglect of the Iraqi people is a result of the bad governance that is seen in most of our region. An external enemy has given many regimes an excuse not to focus on building their societies. Take the enemy out of the equation by signing a regional peace accord and then start working on merit, and interdependence, overcoming this prevalent fear of the ‘other.’