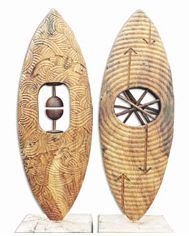 Sculpture that delights the eye and piques the imagination is a rare treat in an artscape increasingly dominated by confrontational shock art. An exhibition of sculpture in wood at VM Gallery by Humaira Abid was not just a show of her immaculate working skills, but also a display of fresh perspectives on everyday life. This young artist has the uncanny ability to lift the banal and the commonplace and reinvent it with interesting twists to address something equally ordinary. Humaira’s sculpture conforms to the premise that art should inspire humour, surprise and evoke wonder and that it should be about things that really matter in a culture. Her current show titled ‘Directions’ focuses on basic human attitudes towards fellow beings, depicted through familiar patterns, signs, symbols and objects in aesthetically pleasing imagery.

An NCA product, Humaira graduated with honours in the year 2000, with a major in sculpture and a double minor in miniature painting. She also has an enduring love for classical music. The two genres, sculpture and miniature may seem to be poles apart in appearance and execution, but for Humaira, the combination has worked to her advantage. She is very adept in miniature painting and extends the same mindset of intensive labour, precision, high finish and fine aesthetic values to her sculptural pieces. The result is an exquisite array of forms with a distinct air of completeness and maturity.

Using wood as a medium of expression, she accords the substance the respect it deserves. Constructing or carving mainly with shisham, she prefers to follow the grain of the wood and its natural coloration. A sculpture’s general properties include its cut, outer shape, use of interior space and the relationship of its shape to gravity and movement. Humaira as a sculptor has often taken on the challenge of extracting from a block of wood the essential idea hidden within it. Her pieces like ‘All Tied Up,’ ‘Hiatus,’ ‘Runner’ and ‘Relationship’ have all been moulded from single blocks of wood in which the natural hidden qualities and form of the wooden piece have been exploited. Be it with tapering points, inherent knots, twists and turns, or simple additions and subtractions, she animates the dead wood with meaningful form. Her work pattern is also very methodical. She begins with a pencil sketch followed by a plaster or clay model which is used for reference in constructing the main piece. This is also how she communicates her idea to the craftsperson or karigar whose help she requires with regard to use of lathe machines etc. Most works are painstakingly laborious and may take her as long as four months to complete. 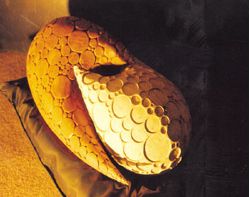 Humaira’s debut solo in Lahore was marked by her ability to give multiple characterisations to the simple, ovoid egg-shaped form. In her present exhibition which speaks of “temporary, short-term or quick relationships” the boat- shaped symbol has been used, signifying movement and direction. The anchor piece of the show is a composition of four inverted, canoe-like panels with ‘enter’ and ‘exit’ windows, arrow indicators and water motion or wave patterns, as well as other symbolic narrative. Much more direct is her piece called ‘Eve’s Woes’ in which two large panels of wood are composed as an open sketchbook. On one page male footwear is carved in relief, while the other sports a profusion of rosebuds. This juxtaposition is an obvious comment on gender tensions, but it is her more witty pieces that are fun to examine. ‘Eat Your Heart Out’ is a giant wooden spoon with a giant heart-shaped chocolate carved into its scoop. Looking at ‘Love Bites’ reminds one of home-baked chocolate cookies. Three baking trays, chocolate hearts and all were placed one on top of the other. Cut and carved from single slabs of wood they were hung in tiers next to the gallery entrance enticing visitors to finger the morsels to check if they were edible. And then there were the pairs and couples at odds and in harmony. The piece ‘Relationship’ was inspired by the common punctuation marks of inverted commas. Composed in mega size, patterned wood, the twosome were reshuffled into a snug and more intimate togetherness. Likewise ‘Companionship 2â€² was an ironical piece. A pair of army boots, meticulously carved, with laces, fine stitchery and undersole patterns, spoke of togetherness, yet also exuded an obvious male macho image.

Humaira Abid is not just a promising young sculptor — she is perhaps the only female among the batch of new aspirants redefining this genre today. Her gender seems to have had a direct bearing on her work ethos. There is no threatening aggression in her sculpture, the feminine touch has lent it a certain grace and charm, even a poetic beauty.