My meeting with the Afghan President, Hamid Karzai was conducted in an atmosphere where security, both around and inside the Presidential palace in Kabul, was stifling. First there was the search by members of the Afghan National Guard. Then, beyond the main gates, I was subjected to an American-supervised search, the officers aided by sniffer dogs. But the stringent measures are understandable: it is the run-up to the much-anticipated and historical Presidential elections earmarked for October 9.

And there can be little doubt about the extent to which the life of President Karzai is at risk from terrorist attacks. He has been targeted in the past, but to boost their efforts to disrupt the election process, the Taliban and its allies — mainly the Al-Qaeda — have doubled their attacks against the President, government officials, coalition forces and so-called ‘western agents,’ in recent days. (A few days after the interview, in fact, Karzai narrowly escaped an assassination attempt).

Neither bravado, nor President Karzai’s pleasant demeanour can disguise the harsh reality of his situation, the presence of high-level American protection agencies a constant reminder of his vulnerability and of the immense difficulties facing Afghanistan on its way to democracy… 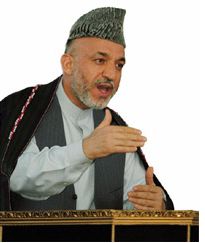 Q: Afghanistan is preparing itself for its first-ever Presidential election in history. How significant is this?

A: Holding both Presidential and parliamentary elections in Afghanistan is of historical significance. It is the first time that the Afghani people have had the opportunity to vote for the President of their choice. It is the first time we have registered voters — 10.5 million people or more are registered. It is the making of a new Afghanistan; the foundation [is being laid] for a country with a legislative government chosen by its people, under a constitution the Afghani people have adopted. [It will be a government] that is Islamic, democratic, and has institutional strength and values. That’s why it is so important.

Q: What do you feel have been your main achievements since being appointed President, and what are you hoping to achieve in the future?

A: There have been many achievements: a strong currency, a better economy, a good environment for peace, a country regaining its status as a sovereign state with its flag flying all over the world, gaining a lot of international respect , the return of three to four million refugees. This country is once again becoming the home of all Afghanis. We have had a growth rate of 20 to 25 per cent over the last two years. We have undertaken the reconstruction of our highways and other projects, [in the process] meeting all the requirements of the political process since the Bonn agreement, and [managing to inspire] more than 10.5 million voters to register.

When I told my friends a year ago that Afghans would register, no one believed me. They said terrorism and the Taliban would disrupt such a process and people would be afraid as a result. I said [it would be quite the contrary] — the more terrorists tried to disrupt the process the more people would come out. That is exactly what happened, and now we are having elections.

So there have been a lot of achievements, but of course there have been failures and difficulties too, such as our inability to address the question of private militia forces in the country, the problem of drug cultivation, rampant corruption, of [seemingly intractable] administrative issues, and so many others. Of course the situation has improved a lot in the past two years, but it needs to improve a lot more.

Q: Talking about the challenges confronting you, how do you propose to address the issue of warlords?

A: Afghanistan has to make progress, and this progress has to come through the rebuilding of the state and its institutions. There has to be a government structure — a judicial and democratic system which didn’t exist before. Also, more importantly, we need a national army and police force, if we want to be a nation state, working through the institution of the government. We have to remove private militias and anyone else who insists on making this democratic process difficult. It is absolutely vital that we get rid of them. There should be a full process of integration into society.

Q: You have been working on this issue for quite some time. There have been so many meetings with warlords and heads of militias, but there doesn’t seem to have been much success. Why is that so?

A: It is a combination of factors. The process has been quite successful and we are trying to complete it. The work is ongoing and when there is a need to take stronger action, we will take it, even if we know there will be some difficulty. We need to have a better government and strong and effective institutions, a stronger economy and a peaceful life. This has to be done and we will do all we can to achieve it.

Q: How do you explain the large number of candidates for the Presidency?

A: The reason there are so many candidates is that we are experimenting with our newly -found democracy. The fact that there are so many Afghanis who want to be President is a good thing. This reflects the enthusiasm our people have for self-determination. Actually, 18 candidates are not that many. I was expecting more than 100 candidates to come forward!

Once you give people the right to stand for office and vote, it is only natural that they will come out and offer their services to the nation. For my part, I would say, let the voters decide who serves their interests best. Democracy lets people exercise their rights. As Afghanistan becomes more experienced in this tradition and political parties evolve, maybe there will be fewer candidates, but for now [the numbers are] a good sign.

The criticism that some of the candidates have directed towards me, saying my stay in office is unconstitutional, is not true. The constitution of Afghanistan says that the President of an interim government should continue until the elections and beyond — until the inauguration of the elected President. Besides, there is no country in the world where a President or Prime Minister would resign and cause a vacuum of power.

Q: That aside, your critics contend that there is nothing in the constitution which gives you the power to delay parliamentary elections…

A: For democracy to exist you have to have certain institutions, which are present in all solid democratic states. We have an election commission in Afghanistan and while it is currently a joint commission between the UN and the Afghanis, it is independent and sovereign. This joint commission decided to delay the parliamentary elections for a few months and this message was conveyed to the government by the chairman of the commission. When it had been decided that the elections would be delayed for two months, the commission asked for more time to study the situation further and they came back to us and told us it was impossible to [hold elections] within two months. I do not have the authority to [challenge the commission’s decisions]. I want this country to have institutions that all of us will respect. Without an independent election commission, this country will not have a true democracy. I should respect it, other candidates should respect it, and the population should respect it too.

Q: From day one you have maintained that you are in favour of women’s rights in Afghanistan, and the constitution has recognised these rights. But some critics have suggested that your government does not reflect this committment…

A: Today more than 42 percent of the registered voters are women. And in some provinces, which are facing extremely difficult situations because of terrorist activities and threats from the Taliban, for example Bakhtia, the number of women registered to vote exceeds 45 per cent! No one can believe this. It is our people who have made success a reality in Afghanistan by adopting the constitution and by going to register despite all the terrorist activities which have resulted in the deaths of so many registrars in the past few months. Women’s rights will be a reality; it is already so.

Q: An escalation of attacks by the Taliban indicates they have upped the antÃ© recently. What kind of presence and influence do they enjoy today and to what extent will this affect the election process?

A: The majority of Taliban are just common Afghans. They are Afghan people, they are in their villages, towns and cities, they are working. They are farmers and shopkeepers — we don’t have anything against them. They are part of the fabric of this country and they have as much right to it as I have. These Taliban have not committed any crimes. They are not involved in terrorism. Some Taliban are out of the country because of fear. I request them to come back. This is their home, their country is theirs and they must come and re-build it together with other Afghans. However, the 50 to 100 Taliban who have blood on their hands, who still serve outside forces and are part of terrorism, are not welcome. If they come back they will be tried.

Q: The latter apart, is there an official amnesty for the rest?

A: I have said this a number of times before. The people want the common Taliban to come back home. They must not be used by foreign forces against their own country and their own people.

Q: What kind of presence does the Al-Qaeda have in Afghanistan today?

A: They don’t have bases. They come and go, they hit and run, and we get them when we find them. If we don’t find them, they run away.

Q: Your country is part of the coalition in the war against terrorism. Where is the symbol of this terror — Osama bin Laden — three years into this war?

A:We are pursuing him, we will continue to do so and we will find him one day — sooner rather than later. He is a fugitive. He can’t run forever.

Q: What kind of cooperation do you have with the Pakistani government in its war against terrorism and its fight in the tribal areas along the border?

A: The Pakistani/Afghani relationship is very good. People to people relationships are fine too. They have a problem with terrorism, we have the same problem. They are fighting terrorism, and we are doing the same in our country. We want this fight against terrorism to be strengthened and intensified. Afghanistan is open to this kind of cooperation with our brothers.

Q: Nonetheless, from time to time we hear Afghani officials accusing Pakistan of operating training camps for the Taliban. Have you raised this issue with Islamabad?

A: We don’t know about training camps. We know about certain individuals [operating in Pakistan]. We have discussed this matter with our Pakistani brothers, and we will continue to discuss it.