A three-member probe commission of the Peshawar High Court Bar Association has reported civilian losses, gross human rights violations and suffering in the Pakistan army’s operation against remnants of the Taliban and Al-Qaeda in South Waziristan tribal agency. It has warned that the situation in South Waziristan is worsening and a serious humanitarian crisis is unfolding in the region.

“Thousands of tribesmen have been forced to leave their homes and migrate to (the neighbouring) Tank city and its suburbs as result of the operation in South Waziristan. Neither the federal or the provincial government, nor any non-governmental organisation, has taken steps to help these innocent tribesmen… Hard-up and broken, the tribesmen are selling their goats and sheep to buy their passage to Dera Ismail Khan, Punjab and Karachi. The abandoned camp for Afghan refugees at Dera has, once again, been occupied by dislocated tribesmen,” says the report.

The commission accuses South Waziristan’s political agent of failing to respond to its request for permission to enter the tribal agency for a proper assessment of the situation. When the fact-finding mission reached the Jandola check-post to enter South Waziristan, the officials manning the post refused to allow them entry into the agency saying, “We have been ordered by the higher authorities not to permit you to enter South Waziristan.” Consequently the group had to rely on eyewitnesses, victims of the operation, displaced tribesmen, tribal elders, religious leaders and members of the national assembly of the area.

The commission says that according to local tribesmen, stories of the killing of terrorists at a camp in the Dhale Khwla Karam area of South Waziristan in air bombardment on September 9 were a farce. “The fact is that a Quran Khwani was being held when the place was struck by bombs. About 52 local tribesmen were killed. The claims about the death of foreigners is false,” the report says. The locals have issued a list of the innocent victims of the air strike. They are all Mehsud and Wazir tribesmen. The report says that the government has failed to prove its claim that those killed were foreign terrorists.

The commission also maintains that the forces killed eight persons in indiscriminate firing at Wana Adda when an unknown person mistakenly exploded a bomb. They all belonged to the neighbouring Tank district. A doctor, Dr Samar Gul, who was proceeding to a hospital to resume duty, sustained three bullet injuries. He is still undergoing treatment.

The commission also reports that indiscriminate bombing at the Makeen area in South Waziristan has also caused extensive damage. Four innocent people were killed and 14 wounded in shelling at the house of Haji Sala Khan alone.

Markets, shops and serais in Makeen have been demolished. Clinics and mosques have also been targeted in the bombardment. Casualties on both sides are substantial. 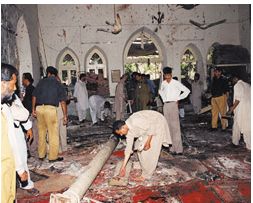 The commission also reports on the considerable human losses in Ladda tehsil. Several dead bodies are in the possession of the forces but people are scared to claim them, the reason being that if someone comes forward to claim the bodies, he might be arrested. However, recently some bodies have been handed over to their respective families.

The commission also reports dozens of casualties on both sides in Karwan Manza, Kani Guram and the Karama areas of South Waziristan. The majority of them are locals. Some dead bodies are still lying in the forests since, but people are afraid to venture there to retrieve the bodies.

Several markets and shops have been reduced to ashes as a result of the bombardment in Wana. And owners of those shops that have survived are required to pay between 500 to 5,000 rupees if they want to take some essential items out of the shop.

The commission says that on September 11, two cousins, 11-year-old Muhammad Noor and 15-year-old Irfanullah, were injured in shelling by a helicopter, while they were grazing their goats. And when some people tried to take them to a hospital in Tank, the political administration arrested them at the Jandola check-post. Irfanullah died while Muhammad Noor is still in the custody of the administration.

The commission says that during the investigations it came to light that the government had issued a circular to all hospitals that no injured person from Waziristan, including children, women and old people, were to be given medical treatment because they were terrorists.

Several innocent people have been arrested and kept in various prisons, lockups and forts. They include religious preachers and tableeghis as well. The commission maintains that, according to the tribesmen, the bodies of the locals are mutilated and sent forward with a tag that identifies them as foreigners.

The commission has proposed that the operation should be halted immediately and the army sent back to the barracks. It has called for the rehabilitation of victims of the operation and a resolution of the issue through negotiations. It has also demanded the construction of camps, and provision of food and medical facilities to those civilians who have fled their homes.

The government, however, has rejected the commission’s report and termed it one-sided and incorrect. “We respect their views, but they only visited Tank and returned the same day. They talked to a few persons and prepared their report,” says Brig (Retd) Mehmood Shah, secretary FATA (security), at the NWFP Governor’s secretariat. “They should have approached the government as well so as to know the official position,” he adds.

The commission has submitted its report to the Peshawar High Court Bar Association, but as Shah points out, “The writ of the High Court and the Supreme Court doesn’t extend to the tribal areas, including South Waziristan.”

The plain-speaking, straightforward, Brigadier Shah does however, admit that there have been civilian casualties, “but not to the extent that is being portrayed.” “The government is working on setting up a media cell in order to facilitate the media’s access to information,” says Shah. “We would also like a parliamentary delegation to visit the area. This way a proper picture would emerge.”

He denies that any ban has been placed on journalists or other people wanting to visit South Waziristan. It is the local conditions that create obstructions, he maintains. “Journalists can go — but at their own risk.”