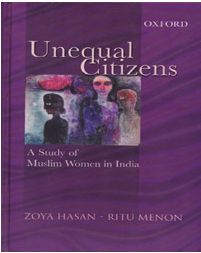 Taking a strictly academic approach to the issue of women’s empowerment, Unequal Citizens is a quantitative study that analyses the intricacies of the role of Muslim women in Indian society. The study asserts that as women first and more so as Muslims, this group is close to the status of the lowliest of the low in today’s India.

Moving into the realm of pre-existing social stratification, it is asserted that Muslim women are on a rung slightly above that of the Hindu scheduled castes.

This phenomenon, survey results show, is due to a conglomeration of reasons. Going into the details of results, the book studies the status of Muslim women across India. Taking a scientific approach, Muslim women from a cross section of society’s income groupings are compared and contrasted with Hindu women. Studying Muslim and Hindu women who are 18 years or older across India, the book depicts results from a sample of 10,000 households from 40 districts in 12 states with a heavy Muslim population. Differentiating between 80 per cent Muslim and 20 per cent Hindu households, the study looks at the issues at a 60:40 ratio of urban-rural households.

While not designed for the layman, Unequal Citizens certainly is a dream come true for academics. Based heavily on survey results, the complex response to questions posed are depicted in the body of the chapters. Each factor is correlated with others to show the dynamic interaction of Muslim women’s lives. It is refreshing to see that the authors decided to include conclusions for each chapter, which are much more readable and provide a concise summation of the results derived from each section of the survey.

Starting with the socio-economic status of households, the issues of education, marriage, women’s work, decision-making, mobility, domestic violence, access to basic amenities, awareness of welfare schemes, women’s participation in the political process and access to mass media are addressed. By studying social inequalities and simultaneously categorising the population into five socio-economic classes, this study further looks at the ownership of house, land and consumer durables as representative of the standard of living. Arguing that access to political and economic resources is central to moving out of the cycle of poverty and deprivation, Hasan and Menon state that Muslim women’s economic and social vulnerability is neither documented nor acknowledged, much less addressed. Muslims are second to lowest on the socio-economic rung primarily due to three factors: educational attainment, occupational profile, and a concentration of Muslims in socially-backward regions of India.

Low educational attainment has led to a dearth of Muslim women joining the ranks of the working class. According to the study, a large portion of Muslim women did not report working. Marriage is the norm for all Muslim women of India; women are either not sent to school, or are taken out at an early age to assist in household chores. As a result, these women are not given a fair chance in the public paid labour arena. Although this fact is, in itself, dismal, one positive trend cited by the report is the rising age of Muslim girls at marriage.

As mentioned earlier, Muslim women’s employment is understood to be under-reported. This is thought to be due to the fact that both men and women undervalue female contribution to the socio-economic sphere. The results of this study are staggering: even though the majority of Muslim women are poor, 85 per cent of them are reported as not working.

A startling 86 per cent of women surveyed responded that they needed their husband’s permission for any and all activities. Decision-making was shown to be collaborative in fewer cases than not, and women avoided conflict to the utmost in order to preserve the peace.

It has been argued that there are separate spheres of influence for both men and women and that this divide is no less apparent for the Muslim women surveyed. Nonetheless, major decisions about personal aspirations and choices have not been left to women. The man of the household makes these decisions. It is not surprising to read that the Women’s Freedom of Movement Index depicts that a woman’s role is relegated mainly to the private sphere. Perhaps not so surprising, the higher up the income bracket, the more restricted a woman’s mobility.

Being relegated to the private domain compounds the fact, and is conversely influenced by the fact that women are uneducated, do not work, and are married off at an early age. Women are vulnerable not only in the work arena, but in transit, as well as in the home. It is extremely difficult for authorities to intervene in the private domain and most cases of domestic violence go unreported and unaddressed.

In this study, it was found that a vast majority of Muslim women had not heard about welfare schemes and programmes meant to target the poverty-stricken. This is especially true for programmes designed to ensure that employment opportunities are generated for women.

Although 85 per cent of the respondents vote, the vast majority do not want to stand for elections inspite of the fact that seats are reserved for women, as most fear outright violence. Compounding this fear is a lack of confidence in their own knowledge. Women are reluctant to join as they are not educated and feel that this is a necessity for active participation in the political process.

Finally, exposure to mass media is not a common occurrence. For both Hindu and Muslim women, television viewership rated a ‘sometimes.’ Unequal Citizens argues that media exposure can result in women being more educated and emphasises the need for tapping into the radio market, which is less expensive than television and does not require literacy as newspapers do.

Although primarily studying Muslim women’s position in society, it is useful to remember that this is done in relation to the Hindu women’s status. Supplementary data and resulting statements are provided. For instance, qualitative data in the form of case studies is mentioned in order to corroborate findings. Although not attempting to integrate quantitative and qualitative methods, the value of qualitative methods has been recognised. In much of the developing world, societal restrictions relegate women’s issues to the back-burner. More often than not, gender empowerment, equity, and equality are thought to have no serious academic grounding.