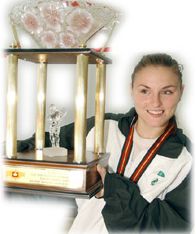 Pakistani women are gradually waking up to the reality of sports. After spending years in the shadows of their illustrious male compatriots, who have made considerable impact in games like cricket, hockey and squash on the world stage, athletes belonging to the fair sex are now itching to make their own mark.

Interestingly, if there is any sportswoman who can really epitomise the growing girl power in Pakistan, it is the London-born, London-based squash player, Carla Khan.

This 24-year-old is the newest heir to the once mighty Khan squash empire that captured virtually every title that the sport had to offer during the best part of the last five decades. Carla’s grandfather, Azam Khan, won four British Open titles during the late fifties and the sixties and is unanimously regarded among the legends of world squash. Azam’s elder brother, Hashim Khan, was dubbed the ‘father’ of Pakistan squash and was the first global champion produced by Pakistan in any sport.

After producing countless male players who went on to dominate the international scene for years, the Khan clan has finally given the world stage a potential world champion in the women’s arena.

At the moment, Carla is ranked No. 23 in the world. That already makes her the highest-ranked Pakistani woman on the world stage in any sport. But for a girl who comes from a family of legends, such a feat does not suffice.

“What I want to become is a world champion,” says the ambitious Carla who took to squash like a duckling takes to water. “It may take some time, but I believe I have the potential to get there,” adds Carla, who has been representing Pakistan for the last few years, after initially making her debut for her country of birth — England — as a colt on the international junior circuit in the late nineties.

This fall, Carla became the latest Khan to take the fast track to squash glory by winning Pakistan’s first ever international squash tournament.

In 1959, her grandpa travelled to London in search of fame and fortune. He achieved both by winning the British Open, then considered the World Championship of squash in an effortless manner.

In 2005, Carla made the return trip from London to Wah, a place just about a 100 miles from Azam Khan’s city of birth, Peshawar, with a slightly different agenda. She just wanted recognition in a country which, despite her British nationality, she considers as hers. For Carla it’s the blood connection that makes her a Pakistani. It is because of that reason that she took up Pakistani nationality a few years back and has been representing the country of her (paternal) ancestors since then. 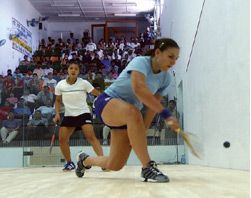 By the end of the Wispa POF Wah Open in Wah Cantt, squash fans had a snapshot of Carla’s potential. She got her game together at the Jahangir Khan Squash Complex in Wah, slashing through the draw as easily as she was racing through the chapters of the latest Harry Potter Book. She won the tournament without dropping a single game and earned a big round of applause from a packed gallery which included the all-time great of world squash, Jahangir Khan, by beating Malaysia’s second seed Sharon Wee in the final.

Her performance was enough to force Pakistan Sports Board officials to take notice and Carla was soon commissioned to represent Pakistan in the national squash team for the 4th Women’s Islamic Games held in Tehran late September. Carla was the favourite to win the gold there but was surprisingly beaten in the final by Malaysia’s Tricia Chuah. But she did win a silver for Pakistan.

Carla learnt squash from her vastly talented father, Wasil Khan Sr. Wasil was once a young prodigy for England, being a county champion at the age of 15. Like his father Azam, Wasil also excelled in both tennis and squash, winning the British Junior Open squash title as well as the Davis Cup in tennis.

“I grew fond of squash when I was still very young,” recalls Carla. “My father used to take me along for his league matches and I can say I grew up watching them.”

For Carla, her father was and still is her biggest hero. “He is a left-handed player and makes squash look like an art. He plays those unreachable shots that leave his opponents helpless. I have learnt my best shots from him. The only difference between us is that I only play these shots when I am really required to.”

Wasil spent the best part of his life dividing his routine into playing and coaching. But these days, his only pupil is his daughter.”My father attends my training sessions quite frequently and always corrects and rectifies any flaws in my game,” she says.

There is another Wasil in Carla’s life apart from her father. It is Wasil Khan Jr, her younger brother. “My brother is also my training partner,” she says. “As a junior player, Wasil was very talented and an exceptionally good shotmaker.”

Unlike his sister who is planning to scale the tall walls of global fame, Wasil Jr ended his squash career as a top county player with a few trophies won on the junior level. “He no longer competes in tournaments because of other interests,” explains Carla. “But I am very fortunate that he still finds time to help me in my training.”.

Apart from her two family members, Carla also gets training from a former Pakistan junior champion, Muhammad Khalid, and an English coach, Jeremy Colton. Khalid is a part-time player and coach and represents Ealing’s top string team in England. Colton is a qualified and experienced coach who has trained squash players extensively in England and Australia. “We are a great team and will produce great results in the coming years,” says a confident Carla.

Apart from squash, Carla’s next big passion is music. She loves Stevie Wonder, Marvin Gaye and Luther Vandross. While the flair for squash comes from her paternal side, she has inherited her passion for music from her mother, Jacqui. “My mum brought us up listening to the Legends of the Motown music. At the moment, I am very much into Sean Paul’s new album, I also like to listen to Bhangra, so you could say I like a variety of sounds. Music plays a big part in my family. My eldest brother Nik is a professional actor and singer, and he is currently playing the lead role in Barry Manilow’s Copacabana. My younger brother Wasil, who is only 18, is an aspiring DJ.”

Carla loves to wear red and black and is partial to roast and aloo saag.

Carla loves to wear red and black and is partial to roast and aloo saag.
Her good looks have often got her offers for modelling assignments but, at the moment, Carla is focused on her squash career. “Right now, the only thing I want to achieve is glory on the squash court,” she signs off.