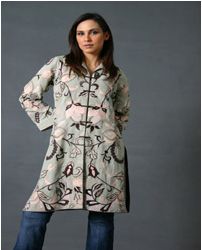 For the Pakistani television industry, the nineties were a decade of private productions. Those were the days when NTM and PTV were the only Pakistani channels around to air the new genre of serials, many of which were shot abroad, and the era of glamour on television was born. “Super-model,” Seemi Pasha, was the first one to take the giant leap from the catwalk to the small screen. She was followed by contemporary super-model, Vinnie, some years later. Playing a rape victim in Jamal Shah’s Kal, there was no looking back for Vinnie and she went on to do a Haseena Moeen serial shot in Mauritius with top television actors, followed by a number of hit television serials.

Vinnie, Iffat Rahim and Aaminah Haq were part of the first batch of Pakistani super-models who made the cross-over to acting and paved the way for others to follow. Aaminah’s win as best television actress in the Lux Style Awards last year received considerable critical flak but it sent out a loud and clear signal: in a rapidly growing industry, models are becoming influential actresses, enjoying mass appeal. Tanya Shafi, Sunita Marshal and Sadaf Pervez, all top notch models, have also catapulted to fame as actors. Tanya, with her anglicised Urdu and elitist back ground, has been one of the few actors in the team of Geo’s populist soap, Jo Baat Ghar Mein Hai, running well into its 125th episode, to have actually stayed on to complete the project. She calls acting a “relief” from her world of “Grammar School and Sind Club.” . Sunita Marshal’s claim to fame might be the commercial of the air hostess with dreadful body odour, but she made her presence felt in HUM TV’s Shiddat and Malika opposite Nadeem Baig. Sadaf Pervez, with her successful stint in Tum Meray Ho, is focusing on joining the Express channel to be launched by the Lakson Group by the end of this year and says anchoring is more up her alley.

This new breed of TV stars is very candid about the fact that acting means “good money” for established models who get an opportunity to cash in on their celebrity status. Modelling might be a short-term career, but it certainly seems to have long-term benefits — and the day of the model turned TV actress is here to stay.