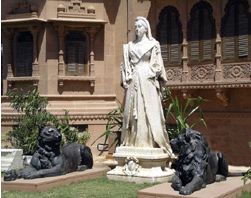 The much publicised exposition, Jewel in the Crown : Karachi Under the Raj, at the Mohatta Palace Museum, is a mammoth show with a powerful visual impact. In a country where the culture of museum-going is relatively new, such exhibitions may not receive the attention they deserve. Viewers are often overwhelmed by the sheer magnitude and grandeur of the display, and the much needed spirit of inquiry that makes the viewing experience meaningful is not fully activated.

Addressing a traumatic period of sub-continental history is a challenging task, but the resurrection of an ambience fettered to the colonial yoke, in a somewhat celebratory manner, is even more so. Evoking mixed feelings of pride and shame, sadness and joy, this exhibition revives the thorny relationship between the colonists and the colonised. Today, half a century onwards, having tasted the ‘glories’ of freedom as inhabitants of an independent nation, do we not need to appraise the situation rationally, shun the negatives and use the positives as a learning experience?

Jewel in The Crown enables us to visually examine Karachi under the Raj, through its 3000 strong, extraordinary collection of arms and armour, textiles and clothing, correspondence, memorabilia, portraits, engravings, photographs, statuary and decorative objects accessed from the holdings of over 60 public institutions, a number of families and individuals. The show is a joint presentation of the Mohatta Palace Museum and the Dawn Group of newspapers. Thematically constructed by curators Hameed Haroon and Hamid Akhund, it gains significance when reviewed in its historical context.

Curator Mohatta, Nasreen Askari sketching the necessary backdrop, explains, “The British, having already acquired the Indian mainland, turned their attention to the north-western flank, which is present-day Pakistan, in the 19th century. Having understood that trade was essential — the fulcrum of their success, communication via trade — they decided to navigate the Indus starting from Sindh. The Talpur families, who were indolent and despotic rulers, were no match for the diabolically cunning British. The military intelligence we speak of today was under veneers and veneers of diplomacy. Tricked into battle, the Talpurs lost to the British in 1843.” 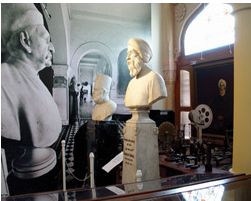 “Having acquired Sindh, they annexed Punjab in 1849 and all they needed now was the North West Frontier (a 150 years down the line they are still fighting in those mountains and caves because they want access to the Central Asian oilfields). The British did exactly what is being done today, where 150 years ago we suffered the same consequences, but in the process benefited slightly because they gave us institutions like schools and colleges, roads and railways, law and order and they gave us the creation and formation of an elite. With the elite came wealth, power and education.”

Perhaps this is what we need to see, and read between the lines while admiring the exhibits on the ground floor; the ornate courts of the rulers of Kalat, Hyderabad, Bahawalpur and Khairpur who patronised arts and crafts and had civic administration such as they understood it.

Continuing with her discourse, Askari narrates, “The subtle influence of the British on the social behaviour of the ruling elite was apparent in changing habits like learning to dine on tables rather than eat off the floor. They learnt about curio cabinets and showcases where they could exhibit their heirlooms and proclaim their heritage and cultural refinement. While exploring the evolution and the insidious influence of the British colonial administration on the city of Karachi (the hinterland remained relatively immune), one can trace its growth from a fishing village to a trading post and eventually into a metropolis that existed at partition. It was an incredibly well planned city on the part of the British administration and it is extraordinary that very little is documented. However, in the British archives Karachi is one of those rare cities whose every street light, road, residence and cantonment area is annotated. Venues like the Kothari Parade, the Pier, old institutions like the Sindh Madressah, DJ Science College and the courts were carefully planned. You can see it in the Indo-Saracenic domestic architecture. The English recognised that Karachi was a huge hub, had a wonderful natural port and harbour, and the whole idea of mercantile activity began to develop with the emergence of merchant traders like the Parsees, Memons, Khojas, Ismailis, the Afghans,Turks and the Ispahanis. The Mohatta Galleries are full of memorabilia, artifacts and statuary relating to mercantiles like the Cowasjees, Dinshaws etc etc.”

Galleries on the first floor contain the KMC rooms: the British attempt at civil and civic governance, the communities that contributed to it, followed by the Muslim League Movement and the nationalist scholars and the literati. Artist Fayzee Rahamin’s Gallery has been recreated, with whatever of his original works could be salvaged. President Iskander Mirza’s daughter Fakhre Jehan Asad Ali’s collection has proved to be hugely popular with women and children visiting the museum. Evolving from Victorian doll-house models, these miniscule replicas of shikargahs, havelis, lodges and nouveau riche residences of the elite in those days are exquisite little windows into lifestyles prevalent then. 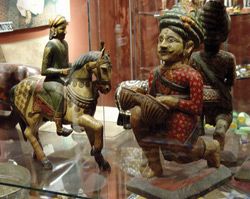 Recreation of the Cantonment Railway Station platform and compartment of the Karachi Kotri Line on the night of 14th Aug 1947 is another area that impacts the mind. The water vessels, (matkas) labelled ‘Hindu pani’ and ‘Muslim pani,’ tell their own tragic tale as does the stretcher with blood-stained sheets covering a dead body. Likewise the duplication of the docks and the courtroom scene of the trial of the Johars is another landmark event that viewers can see beyond the history books. The Quaid’s photo gallery in one of the many large pavilions outside is a splendid show of the Anglo-Saxon Musalman, Jinnah’s official and intimate moments with friends and family. A replica of Honeymoon Lodge, a historic residence perched on a hillock of what is now Defence Housing Authority, where the Aga Khan was born is another interesting recapulation of recent history. And the 1912 Fire Engine that was parked in the Mohatta lawns, it is said, still works.

This show is not a single visit exhibition, but having absorbed whatever is humanly possible, one wonders what one is taking home at the end of the day. Nasreen Askari’s rejoinder to this is,

“You are taking home a sense of history, and a sense of identity. The exhibition should make you understand what Karachi was, and sadly perhaps, what it has become. How we have not learnt from all those lessons of history about all those people who came in order to make a success of the city. There was the creation of a social class to meet the new demands, who understood that what we have indigenously should not be lost. Of course there was competition among the communities but they all had their niches, they recognised them and co-existed because they realised the secret of success lay in co- existence. So much has been lost. This exhibition is a reminder of what the city was, how it was built and how it grew and thrived. We have to understand the lessons of history. A lot has gone into building Karachi and we have to fortify it — not destroy it.”

Today political chaos prevails worldwide and the concept of freedom becomes more precious than ever before. Quite similar to the years of the Khilafat Movement, the Muslim Ummah in present times is also being threatened by the political clout and wealth of the west. ‘Those who do not learn from history are doomed to repeat it.’